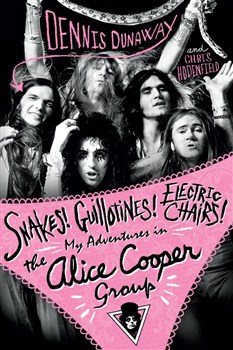 Louder Than War reviewer Jamie Havlin assesses a biography of a member of one of rock’s most controversial ever acts, whose stage show made use of, you’ve guessed it, snakes, guillotines, electric chairs and much, much more.

Straightaway, I should stress that this is the story of the bass player of a band collectively known as Alice Cooper, although after adopting the then controversial female name in the late 60s, the group’s singer Vince Furnier also began being known under that name too.

Snakes! Guillotines! Electric Chairs! takes the reader right back to Dunaway’s schooldays when he meets the young Vince, the son of a part-time preacher, in a high school in Arizona.

There the pair bond in an art class through a love of Salvador Dali and surrealism. Before too long they form a band together with some local pals which they call the Earwigs, their first gig being a parody of the Beatles where they wear jokey moptop wigs and change the lyrics of several Lennon/McCartney hits.

The book then charts their slow but steady rise right through to their mid-’70s heyday, or what Dunaway terms ‘Bizarro Land’: number one platinum albums on both sides of the Atlantic, headlines in papers across the planet and playing to over 150,000 fans in an enormodome in São Paulo, still the largest ever indoor concert.

The book is punctuated with some great anecdotes such as the young band being so in awe of the Yardbirds that when they got the chance to support them they hit upon the idea of only including Yardbirds tracks in their set as a tribute. Not a great idea I wouldn’t have thought.

Then there’s the old school music industry bigwig who burns their cassette tape demo after playing it although an early morning impromptu rehearsal for nighthawk Frank Zappa proves more successful. Actually I wouldn’t have thought that was a great idea either.

Dunaway (with help throughout from Rolling Stone journalist Chris Hodenfield) also tells the tale of the band jumping in a van on a whim and driving out to make their home in Los Angeles, as Dunaway puts it: ‘The summer of Love 1967 was calling our names.’ There they hang out with a dazed Syd Barrett and Pink Floyd and party in their flat with the Doors, David Crosby and Arthur Lee. Janis Joplin and Jimi Hendrix make cameo appearances too and later Iggy Pop, John Lennon and even Dunaway’s hero Salvador Dali – who apparently had appalling body odour.

We also find out the truth about the Ouija board that supposedly spelled out the letters ALICE COOPER to give the band their name and the real story behind the reports of the chicken killed onstage in Toronto at one of their shows – I reckon it’s safe to say they wouldn’t disagree with the line in The Man Who Shot Liberty Valance: ‘When the legend becomes fact, print the legend.’

For me though the most fascinating part of the book is in the early days. These were certainly fascinating times in the U.S. of A., when the simple act of wearing your hair long was seen as an invite for rednecks to chase after you in cars with the intention of inflicting as much violence as possible on you. And Alice Cooper wore their hair very long, as Dunaway puts it: ‘We might as well have worn walking billboards proclaiming, “Please Punch Me.” ’

What good ol’ boys and conservatives thought of Cooper’s cheerleader’s dress on the back cover of their debut LP, I’ll leave to your imagination.

They stay for a while in a house in South Central LA in the wake of the Watts riots and the threat of being sent to fight in Vietnam lurks in the background, at least until the entire band are listed as unsuitable for combat.

I doubt Alice Cooper taking on the Viet Cong would have added much to Uncle Sam’s efforts on that front.

Many of the inspirations behind the Alice Cooper shtick are revealed including the story of how guitarist Glen Buxton’s pet snake Kachina became part of their stage act and the bassist also shares his thoughts on the descent into alcohol and drug abuse of Buxton and Alice/Vince Furnier.

I doubt anyone reading this will now be surprised when I say that this book is highly recommended for all Alice Cooper fans but even if, like me, you’ve only ever taken a passing interest in the man/band, there’s bound to be enough to grip you and there’s some accomplished writing to enjoy too, for instance, the mascara on a hippy girl’s eyes is ‘smeared like a Jackson Pollock painting’ and a Buxton guitar solo sounds like ‘angry hornets devouring a city’.

Dunaway comes across as a very creative guy who is smart enough to realise he was always destined to live in the shadows of his schoolboy friend, although he is also rightly proud and keen to point out the huge contribution he made to an act that were not only pioneers of theatrical rock but who made some wonderful music like School’s Out and Elected that still sounds fresh today.

More information on the book can be found here: dennisdunaway.com/book.