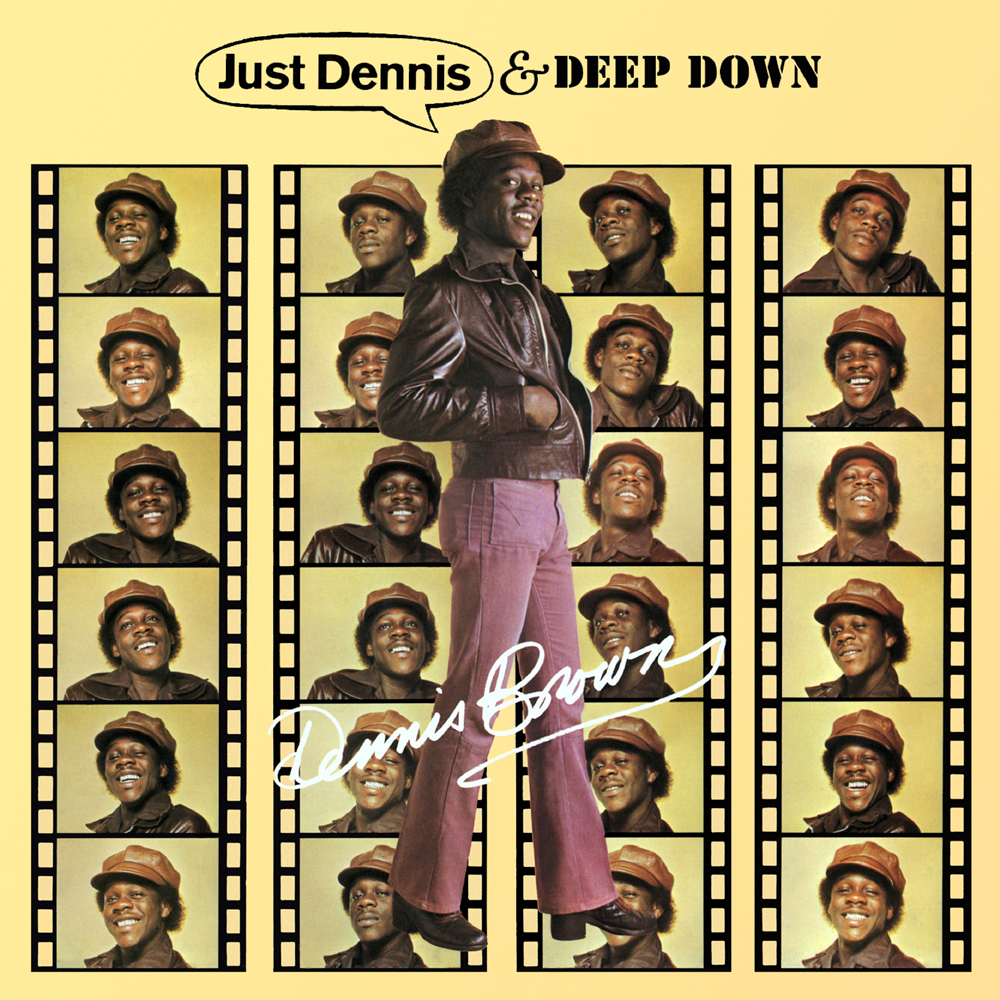 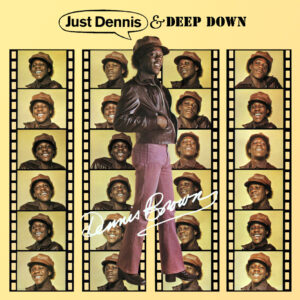 Twofer bringing together Dennis Brown’s two mid-70s albums Just Dennis and Deep Down, plus 20 bonus tracks also recorded with Niney The Observer behind the consul….Ian Canty hears the dawning of the Crown Prince of Reggae’s golden era…..

Something of a child prodigy, Dennis Brown was 18 at the time of the first of the albums presented here, but was already an eight year veteran on the Jamaican music scene. Coming from a performing family, he first came to attention playing live with Byron Lee And The Dragonaires at the age of 12, having turned professional the year before. The youngster gravitated to Orange Street, the musical HQ of Kingston and by extension Jamaica. From there Brown launched himself on an extensive recording career, plus a fierce calendar of live engagements as well.

This punishing schedule would have the result in Brown being hospitalised with exhaustion, but the medical advice to rest up was ignored, as he needed to keep the money rolling in. Taking the decision to press on, like he always did, would have a devastating effect in weakening his physical health over the years. The severe work ethic of the man, combined with the drugs that he took, would eventually take their toil and play a part in his early death at the age of 42 in July 1999. For the time being though, Dennis Brown had youthful vim to keep him going.

If we go forward into the 70s Dennis would be close reaching his peak years around the time that these two 1975 albums were recorded. Earlier in the decade he forged a highly successful partnership with record producer Joe Gibbs, which yielded the original version of Money In My Pocket (actually recorded by Niney The Observer on Gibbs’ behalf), a Disco mix of which would much later become a UK Top 20 single in 1979. His partnership with Niney blossomed after that and by 1975 the Observer was acting as Brown’s producer cum manager. He brokered a deal for Dennis with Trojan Records, still a big name in UK Reggae circles, but very much a diminished force by this time.

Because of the record company’s precarious state and eventual descent into liquidation (which would also see Brown and Niney out of pocket), the only fruits of Brown’s time with Trojan would be the Just Dennis album, a collection of single tracks cut over the previous 12 months or so and released in Jamaica on the Observer label. Even so it was clear that this album featured an artist who was starting to fulfil his massive potential. He was being seen in Jamaica as the natural successor to Bob Marley, who was then at the apex of his powers. Marley could see that Brown was a talent in the making and went on record stating Dennis was his favourite singer, bestowing the “Crown Prince Of Reggae” tag on the younger man.

He was spot on too. Marley from the mid-70s on looked more towards the international audience and his adoption of “Rock” accoutrements somewhat strained his relationship with his original Jamaican fanbase. These people started to look more towards Dennis as truly representing what was going on in Kingston and he became a huge star there, his popularity eventually rivalling Bob himself.

Just Dennis is one of the albums fans of Brown favour and it is not hard to see why. His measured, emotion-filled tones were in perfect order and the material, which is mostly self-penned, is out of the top drawer. The influence of his love of classic R&B vocalists like Sam Cooke is evident, his clear delivery meant the conscious messages of Show Us The Way and Run Too Tuff got across easily, his voice simply beautiful. Combining uptight guitar and Roots horns plus Brown’s vocal being at times semi-spoken and relaxed and at others incendiary, Cassandra cooked up an irresistible recipe, the record becoming a big success as a single and has quality stamped all over it.

Even though Just Dennis is a combination of singles everything flows nicely. Brown in the main favoured mid-paced, deftly arranged instrumentations that had the stridence of the Roots style (which was the prominent style at the time) on Just Dennis, but allied to strong tunes and of course that inimitable voice. The fact that he could make anything sound good is never taken for granted, so excellent standards were applied to the music too. There’s some fine Blues guitar picking on the intro to No More Will I Roam and brass is often called on to make a telling contribution, like on (I Am The) Conqueror. There are hints of things to come in Reggae, like Lovers Rock and Dancehall, buried in Just Dennis. Only A Smile showing a little of the former in its ultra-smooth flow and the springy rhythm of Love Jah reminiscent of the latter.

The bonus tracks on this disc include an extend mix of Africa and a couple of fine Big Youth (who accompanied Brown on a wildly received UK tour in 1977) Talkover versions in 6 Dead And Nineteen Gone To Jail (which had some great Dub touches) and Ride On My Brother/Wild Goose Chase. Jamaican only singles Give A Helping Hand (Oh Jah) and Live After are also here and very good examples of Roots Reggae they are as well, but proving Dennis could appeal across the board are My Time and Rock With Me Baby which are pure Pop Reggae gems.

By the time Deep Down was released in 1976, Brown had left the floundering Trojan imprint and as a result this album did not receive a UK issue, coming out in Jamaica on Niney’s Observer label. It was another collection of single tracks that just brings home Dennis’ enviable skills in controlling the quality of his recordings, despite an always hectic workload. He’s in great voice throughout, Travelling Man’s almost Ska pace must have wowed the dances and Wah Wah guitar and Funk stylings give Open The Gate something a little different and from there goes on to expand into a hugely enjoyable and catchy Rasta Reggae tune.

Gospel and Soul collide in spiritual God Bless My Soul and Go Now’s simple and very effective musical structure provides the perfect setting for some more vocal heroics from Brown. Dennis had the confidence here to be able to slow right down like on Shame (Shame, Shame) or speed things up on the righteous Roots of You’re No Good. Again Proto-Dancehall is suggested by Tribulation, a super cool ghost dance, leaving this listener with the impression Deep Down is another varied, high quality platter.

The bonuses on this disc are particularly fantastic – here the appeal of Dennis’ work to DJs and remixers/Dubbers was obvious. With his always excellent voice and tasteful accompaniment, doing some toasting over the top to make something incredibly cool sounding was, as my old maths teacher used to say, as easy as falling off a log. Which is not to downplay the efforts of talented folk like Dillinger (an excellent revamp of Here I Come Again detailing police oppression on Flat Foot Hustlings) and I Roy (a rude Sister Maggie Breast which acts as part two to the original extended take of Wolf And Leopard), they apply their skills admirably. The juxtaposition of Dennis’ voice with the talk/rap of the DJs was always gold.

Though Take A Trip (To Zion) is credited to Brown, it borrows pretty heavily from The Drifters’ On Broadway, but still establishes itself as a separate entity and is hugely satisfying listening. The longer version of Tribulation is full of clever Dub tricks, it’s a winning end-piece to what is a lovely selection box of Dennis Brown just as he was on the rise.

This new collection is littered with quality – the albums are both excellent, the bonus tracks enhance the package no end and the sleeve note has a thorough run down of Dennis’s career by Malcolm Gillett. Dennis Brown would go onto sign for A&M Records and make many more LPs, some which sold far more copies than Just Dennis or Deep Down. But these two find him at the top of his game, totally comfortable with his direction and as at home singing either tender love songs, street level parables or Jah devotionals. He had also Niney in the producer’s chair, who would throw little things into the mix to always keep things interesting. Brown was a rare talent and this twofer manages to bottle some of that lightening effectively – if this is your intro to Dennis Brown you have tonnes more to discover, but this is a great starting point.