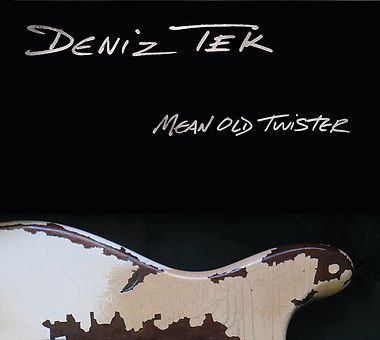 Radio Birdman founder hits a new peak with his most accomplished solo album to date.

Deniz Tek has long been a cult figure for aficionados of Detroit high-energy rock & roll, as well as the Australian garage and punk scenes. Growing up in the Stooges’ hometown of Ann Arbor, Michigan, in the 60s and early 70s, Tek witnessed first-hand incendiary performances not only by Iggy Pop’s visionary avant-rockers, but also the MC5, Scott Morgan’s garage-soul pioneers The Rationals, Sonic’s Rendezvous Band and countless other local acts.

Tek left the US to study medicine in Australia at the dawn of the 70s, setting in motion a chain of events that would lead to the formation of the Sydney-based proto-punk outfit, Radio Birdman. Led by Tek and frontman Rob Younger, Radio Birdman forged a distinctive take on Detroit rock, incorporating influences from the Stones, and Doors through to surf rock and the complex chord structures of Blue Oyster Cult. The Sydney group would prove as influential as The Saints on the Australian punk scene that was spawned in their wake.

Despite splitting up in 1978, Birdman have had several reunions, and the latest incarnation of the band- featuring founding members Tek, Younger and keyboardist Pip Hoyle- toured Europe this summer, to great acclaim. With Tek’s former Birdman guitar foil, Chris ‘Klondike’ Masuak, having released his impressive third solo album, ‘Brujita‘, in March, it’s been a good year for fans of Australian high energy rock & roll.

‘Mean Old Twister’ is the follow-up album to Tek’s 2013 meditation on loss and change, ‘Detroit’. The death of Deniz’s close friend, Stooges’ guitarist Ron Asheton, was one of the themes of that album, yet Ronnie’s presence is inescapable on its successor.  Album opener ‘Burned Black’ sets the tone, a gritty rocker that sounds like it could have been cooked up by Keith Richards in cahoots with Wayne Kramer.  Straight away, it’s clear that ‘Mean Old Twister’ is a more upbeat proposition than ‘Detroit’, and so it proves over the course of this compelling album.

On the second track, ‘Corner Conversation’, Tek conjures an intriguing vignette, coming across like a garage rock Dylan, the lyrics appearing to reflect autobiographical events through a poetic prism.  The line “and it’s always this way” is another nod to The Stooges’ debut, an album whose enduring influence is marbled through ‘Mean Old Twister’s 12 tracks.

Tek sticks with his rhythm section from ‘Detroit’, with groove-player par excellence Ric Parnell on the traps and Bob Brown providing soulful steel on bass.  Tek and Brown shared production honours, while Birdman and New Christs’ singer Rob Younger and Wayne Connolly mixed the album.  It’s a winning combination; like its predecessor, ‘Mean Old Twister’ has a warm, organic sound that harks back to the classic soul, blues and rock & roll records that Detroit and Ann Arbor excelled at in the 60s and 70s.

Overall, the album has a brooding feel not dissimilar to Iggy’s under-the-radar 1993 gem, ‘American Caesar’.  ‘Mean Old Twister’ digs deep into Tek’s Ann Arbor roots- at times you almost expect Scott Morgan to add his soulful tones to Tek’s half-spoken, Iggy-inspired snarl.  There’s no mistaking the Australian influence, though, that hard to pin down mix of space and swagger that seems to be omnipresent in all the best Australian rock & roll.

‘Somewhere’ is a real highlight, moving from ominous garage-noir riffing to a sublime jazz-inflected interlude, underscoring the dark, time-hopping lyrics.  The core trio of Tek, Brown and Parnell are joined on this album by Ron Sanchez on keyboards, Erik Olsen on tenor sax and electric piano, Parker Brown on upright bass, John Roberts on electric piano, Wurlitzer and trombone and Steve Brown and Joe Sheehan on percussion and congas.  Their contributions add a deliciously atmospheric jazz element to some of the songs, recalling the pioneering free-jazz/rock experimentation of Rob Tyner, John Sinclair and Steve Mackay.   It’s tempting to view ‘Mean Old Twister’ as the second part of a trilogy, raising the tantalising prospect of the jazz element being further explored in part three.

‘Crossroads’ is another tightly-coiled rocker with lyrics that appear to reference the Detroit riots of ’67, while making reference to a “mean old twister coming down”. The album’s title has a Janus-like quality, simultaneously  invoking Kokomo Arnold’s 1937 blues classic and a wary gaze to the horizon.  Whether the oncoming storm is the trials of later life or challenges in the external world (I’m sure we can all think of one or two right now), Tek sounds like he’s ready for whatever’s coming down the pipe.

Elsewhere, ‘Comanche’ is a sublime surf-rock instrumental where The Shadows meet Link Wray, and  ‘Prison Mouse’ is another perfectly-poised rocker, its measured pace screwing the tension and swagger to maximum effect.  That’s another thing- ‘Mean Old Twister’ swings like Fats Domino on a unicycle.  Tek, Brown and Parnell play with the strut and swagger of old-school blues and jazz artists like Willie Dixon and Earl Palmer, bringing groove and vibrancy to a fine set of songs.

There’s not a single weak track here, with the high standards maintained throughout the second half of the album. The closing ‘Death by Text’ again draws inspiration from the Stones, and Keith Richards in particular.  These are survivors’ tales, at times reflective, even autumnal, but ultimately determined and life-affirming.  Tek’s most compelling solo album to date, but don’t bet against him raising the stakes again on his next one.

Buy ‘Mean Old Twister’ here. Deniz Tek is on Facebook and the web.