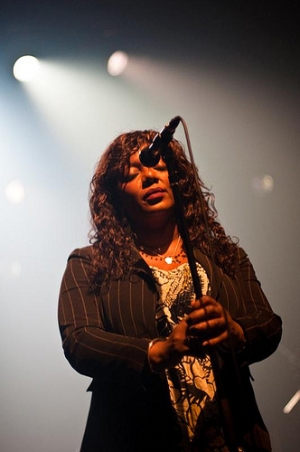 Denise Johnson is the well known world renowned vocalist who has worked with stellar acts such as Primal Scream, Electronic and currently A Certain Ratio. Denise is now releasing superb solo material and is set to release her debut solo album this year. Matt Mead catches up with Denise in this exclusive interview to discuss her illustrious career and to discuss her new projects. 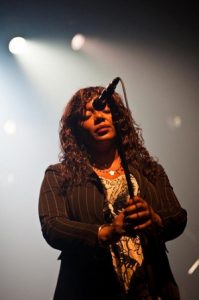 Can we go back in time abit. Can you tell us where you were born and grew up?

I was born in Manchester, mainly brought up in Hulme over the bridge (Joy Divsion Bridge as it’s known) on the other side of Leaf St Baths.

The first music I remember listening to was the soundtrack album of The Sound of Music. It must have been my Mum’s, the song that always had me intrigued was ”The Lonely Goatherd” must’ve been something to do with the yodelling!

The first serious music I’d have listened to would’ve been Reggae and Ska, with my Mum being Jamaican.

There were always loads of house parties that the kids would be allowed to stay up for a certain amount of time, before being packed off to bed.

I just remember always singing from being a little kid through Primary & Secondary schools, I was always in musical productions, joined the choir and sang German Madrigals.

Disrupted classes, sang on buses, sang myself to sleep…

I started singing properly when at The Ritz in Manchester taking part in a fashion show, taking the piss and therefore not being picked for any part of the show that I noticed there was a band onstage, I went over to see what was going on, was then told auditions were being held to find singers for a vocal band, the band manager comes over, says ”if you sing half as good as you look, you’re in!”

I was given 2 songs to learn ”Lost in Music” and ”We are Family” by Sister Sledge and told to come back in 2 weeks for my audition.

In my eyes and ears it didn’t go very well.. There were 2 of us auditioning, the other woman was very professional, looked and dressed the part with a stackful of songs in her folder. ”No, you go first” I said struck with fear at what I’d got myself into. I’d never performed with a live band before. I watched her perform with the band behind her and thought, fuck…

My turn, dressed in a jumper I regularly slept in, covered in fluff. I was awful, voice trembling, no power to it, rooted to the spot ”dive about a bit!” the manager said, hopeless, the shame. He had his head in his hands at one point and I thought, ”Denise, go home”

I remember walking off stage and trying to sneak out without saying goodbye so as not to hear the outcome, the manager says ”where are you going? You’ve got it!”. I was in absolute shock but it was a start and a way in to be able to do what I’d always wanted to do, sing. I learnt so much in that year and a half, how to perform with other singers, about being onstage, microphone technique, projection.

Did you ever take singing lessons?

I’ve never had conventional singing lessons, I learnt how to sing from my Mum’s record collection which was stuff like Diana Ross, Gladys Knight, Simon & Garfunkel and the top 40 by listening to the radio. We had great pop music where Punk, New Wave, Soul, Funk , disco and Reggae sat side by side in the charts. I loved pop music.

I’d sing every part, the lead, the harmonies, over and over again till I’d learnt every single note. The first proper band I joined was in the late 80’s a soul band called Fifth of Heaven, with them we supported Maze & Frankie Beverly on a 9 date tour of the Uk.

My first gig with the band was literally the 1st night of the tour, at Wembley Arena.

Who were your singing influences at an early age?

My early singing influences were Abba, Kate Bush, Karen Carpenter and The Stylistics. We had Aretha Franklin records, mainly live Jazz performances which I only got into at a later stage, along with Nina Simone, Chaka Khan, The Emotions and Teena Marie. 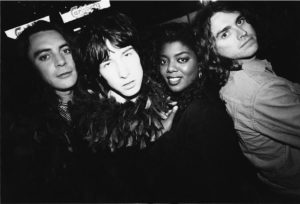 The first I remember seeing/hearing from you was in Primal Scream. How did you join the Scream?

I’d been singing at a local recording studio called Spirit Studios, which was a great experience in learning the ins and outs of recording, there I met a band called Hypnotone who were Tony Martin and Martin Mitler who wanted me to sing on a track, they’d done called ”Dream Beam” they were then signed to Creation Records and Tony from the band had been doing bits of programming for Primal Scream in the studio in London.

Bobby Gillesie & the band had written a song called ”Don’t Fight it Feel it” that he didn’t feel he could sing/do it justice and thought it’d be good to have a female voice sing the lead vocal.

Much to Alan McGee’s dismay. He didn’t feel the band having someone else other than Bobby singing was a good idea. Tony suggested me.

Hypnotone were invited to perform at Dnhy Rampling’s Shoom night in London, the Scream guys were invited to check me out, the story goes that Innes calls Bobby and says ”Get down here now, we’ve found the fucking singer for Don’t Fight It Feel It!”

What followed were 5 or so truly magical, hair tearing out, raucous years.

You featured on their world famous album Screamadelica. Did you know this was going to be an all time classic?

Recording with Primal Scream was nothing like I’d experienced before.

It was more like going for a night out and you might do a bit of singing in between! And definitely a top night out when performing with them, because of the band’s influences there was a really good eclectic mix of sounds and grooves.

Gigs didn’t always go to plan… There were a few. Gothenburg:Sweden. Don’t ask….

I saw you joined Electronic with iconic names Bernard Sumner/Johnny Marr. What was it like being in their company? Did you tour with the band?

Being around Electronic in the recording studio was a joy, the humour, dry as, the musicianship, world class, I was extremely honoured to be asked to sing on their first 2 albums. I didn’t tour with them but did a few tv appearances. Later with Jools Holland & TFI Friday.

It’s been said you spent time with The Charlatans, Beth Orton and Ian Brown. Is this true?

Let me nip this one in the bud before I get to it, I’ve never sung on any Charlatans or Beth Orton albums.

Nor was I discovered by Frankie Beverly and I wasn’t brought up in a gospel setting. No idea where the guy who wrote that got any of that from!

You’ve been playing live with groundbreaking band A Certain Ratio in recent years, playing all over the world. With their back catalogue being rereleased on Mute Records, have you been enjoyed playing with the band? Are there any stand out memories you can divulge? What are your favourite songs of theirs?

What’s really nice is to see is ACR, with Mute records behind them with their recent reissues. They really deserve all their new founded recognition.

They’re a great band to be with onstage, I’ve learned so much from them, mostly that on record anything is possible, you can do what ever you want and sound exactly how you want to, without having to compromise yourself.

I have so many great memories of recording in the studio with them, Strawberry Studios in Stockport, The Soundstation in Ancoats, The Cutting Rooms.

I remember singing on ”Johnson Sister Brother” from the Up in Downsville album thinking I’m making stuff up here that won’t even be used, wrong, anything goes as long as it’s good & no, I can’t tell you where I got the line ”you like, you lick” from.

Like with any band there are some tense times, I remember we were in Amsterdam soundchecking at The Paradiso when a row broke out, what calmed the situation right down was a tour bus parking up in front of us outside the venue and none other than James Brown getting off it, with a lady on each arm, walking past me and Donald!

”Hello Mr Brown” I squeaked and in that gravelly voice he replied ”Good afternoon” that was surreal.

What’s been your favourite body of work you’ve sung on?

I’ve loved everything I’ve sung on. My only criteria is, does it make me feel something? If it doesn’t, that doesn’t mean it’s bad, just that it hasn’t moved me enough or I don’t think my voice will suit it.

When are we going to see the Denise Johnson solo album?

My debut solo acoustic album will be out this summer. It features a few iconic tracks from Manchester bands and a couple of my own songs.

The response to the first releases ”I’m Not in Love” and True Faith” have been overwhelming. 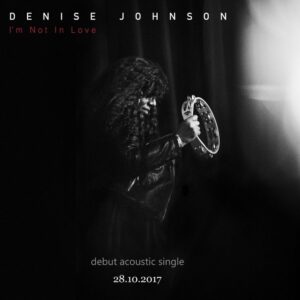 What are your plans for the coming month/Years?

Plans include solo acoustic gigs at The Charlatans Northwich takeover May, The House Party at Kendal Calling and a few other festivals yet to be announced.