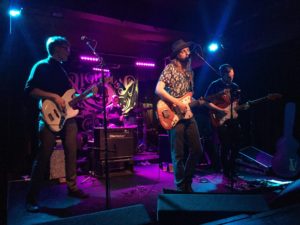 It was a drizzly northern Friday night and the crowd were in contention whether the stage at The Night and Day Café, on the Northern Quarter’s Oldham Street, was one of the hottest in Manchester. Under the glare of the lighting, and packed by the crowd to the back of the building, it certainly was the night Demur were playing.

It was a night which welcomed a blend of genres, with another three bands also taking to the stage –  Sonic Bliss Machine, The Echo Rays and Tío Rico– though I was here to evaluate Demur, based on their changed band dynamics and new material.

A four-piece from Manchester, when you listen to Demur online (which I do recommend), it’s difficult to not be captivated by their particular breed of alternative rock, with bursts of psychedelia and shoegaze bleeding through in the feedback. Originally formed in 2014 under the title Bull in The Whisky Shop, in late 2016 the band experienced a changing line-up of members; and this is clear in their evolving live sound as Demur.

A band who record well and yet create whole new soundscapes from the same songs when playing live I believe possess a power, not a weakness. Here this applies. I was pleasantly surprised by their changed presence on stage, as they burst into an animated rendition of All the Women. James Blake’s vocals simultaneously can hit heights yet draw on depths which tell of passionate, painful human experience – this is music capable of not just conveying emotion, but creating it. Thanks  to powerful, yet well-paced drumming from Ross Wiggins, this kept the tracks complete in their intensity.

It seemed that Demur had cleverly chosen a selection of shorter tracks, so rather than drawing the listener on and on, their playing was infused with a type of nervous tension which left the crowd hungry for more. It is an admirable technique. All The Women was followed by the more reflective Corey, and the shoegaze intensity of Lush.

However,  sounds of shoegaze provided a meaningful entrance into the depth experienced in the three  following tracks on the setlist; Lacuna, Sertraline and one of my personal favourites Quietus, noise rock rolled out with urban fuzz.

The lyrics were loaded with bittersweetness and lived experience, whilst bass from Helgi combined with Ben’s captivating guitar static seemed to create a rhythm which said – this is the intensity by which we live, feel it. It’s a psychedelic experience blended with the edge of punk, which manages to be captivating, but never indulgent. This music is searching for something, and draws us in, not just making us listen on.

In this way, Demur live aren’t just intense, they are intelligent. James’ vocals manage to convey injury, but are lyrical and listenable too – more so than the band’s early days, and at their credit. Their set increased in quality through the course of the performance, rather than starting on a high and slipping away, as many groups do on their first phase back in a new year. Closing with new material and including ‘Envy’ and ‘Intrinsic.’  These were tales of alternate feeling, thickened thanks to the chemistry between the band on stage and  vanquishing a volume which was indeed loud, but without losing meaning.

Reminding me little of mid ’90s Sonic Youth and later Pavement, Demur still manage to convey intensity but seem to have moved away from the more dreamlike dystopias of Slowdive and My Bloody Valentine.

Now their sound is something even deeper, more impassioned, and having seen it on stage, it is enough to captivate anyone to listen to Demur further – and see what they can unearth.