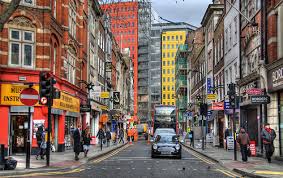 Campaign to stop the demolition of Denmark St is here

Denmark Street has been closed off on the 12th for roadworks doing bore holes and
sewer assessment for the beginning of demolition in St Giles High Street and Denmark Place. No prior written notification was given to any of the retailers in the street and no street closure notification was posted nor parking suspension indicated in public notice placards nor in any emails nor letters.

This is rather odd? When Alastair Choat and I organised our Glimmer of Hope – Save Denmark St Festival on the 26th Alastair spent some months getting permission/consents from Camden Council, Crossrail, Consolidated Developments, TFL, The London Authority, The Police, and The Highways Dept. The plan was to do everything properly. Written notification was tied to each lamppost and posted in shop windows 14 days prior to our 19 hour street closure, re buses being re-routed, etcetera, but not here between the 12th and the 16th inclusive.

Deliveries are not currently possible to any of the shops without considerable difficulty.

No refuse has been taken away since the 11th. It is piling up. Please photograph this.

Something of a Camden Council double standard methinks here. One set of rules when it comes to redevelopment – and clearly a lack of respect for all of the retailers and residents.

These are some of the comments posted on social media from the guitar shops:

“The street has been closed 2 days now and look at what happens when rubbish isn’t collected in that time on a busy retail street…I tried to speak to some guys digging up the road and got 3 “No speak English” and 2 “Sorry love, not been told anything about time scale”. The hole in the road speaks for itself though…”

“fyi, to my knowledge, no businesses on the street were made aware of the closure and the daily deliveries and shipments have been made very difficult…”

“One of our couriers had to park by The Angel pub today and bring a piano all the way down the street, traversing boxes and shit in the pavement all the way to the shop. A fucking piano! They weren’t to know the road was closed… According to Camden council, it’ll be open again on the 16th. They were completely disinterested in the rubbish collection issues… Imagine the amount of boxes and bin liners lining the pavements by then… I would advise daily visits and photos until then, if it can be arranged…”