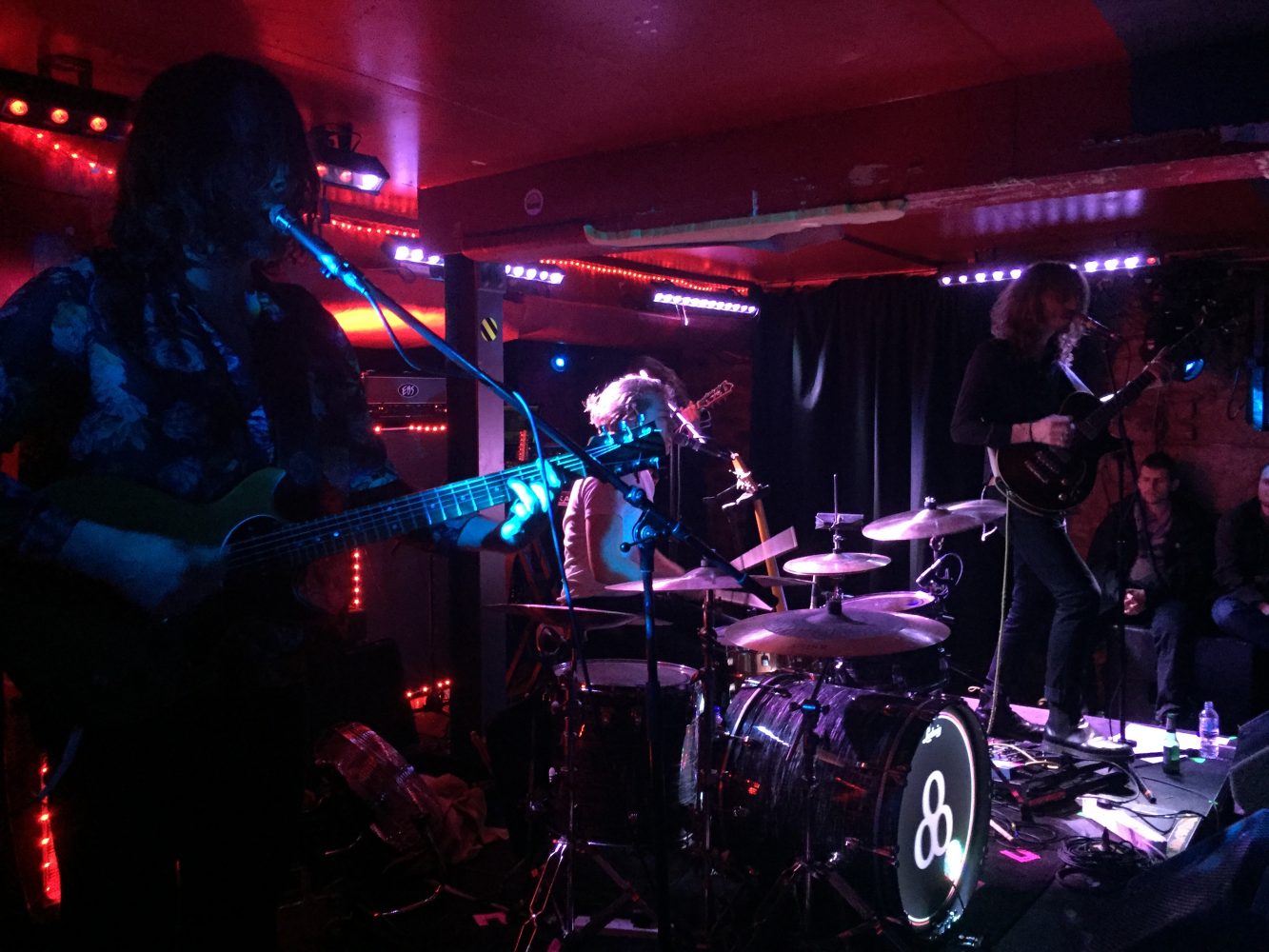 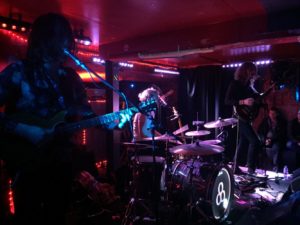 A dreich, drab Sunday night in Glasgow, the sort of night that you just want to shut the curtains and settle down on the sofa with maybe a glass or two of wine and contemplate work on the Monday morning. However, tonight the weather may have been bleak, but the forecast was good – a gig from a bright and energetic band and no work tomorrow.

Forsaking the rioja and the sofa I headed out into the horrible evening to get some metaphoric sunshine in the form of the uplifting hard-edged fuzzy rock with a psyche pop edge from Newcastle’s Demob Happy.

Arriving just too late to fully enjoy what first support Valeras had to offer, hearing only their last song and a half, I did though hear enough from the three-strong guitars of the young five-piece to make me want to seek out more from them. Unfortunately for the band, I wasn’t the only latecomer and they played to only a handful of people.

Second support Soeur blew me away and the others who had made the effort to come down early were similarly not disappointed. I was mightily impressed by the sound that came from this Bristol-based three piece. The noise they produced from their 2 guitars and drums was phenomenal and the vocal harmonies that came from the two front women were a joy to behold. My immediate thoughts on the night were that they were like a heavier/rockier Belly/Auf Der Mar. I fully expect to hear more from them in the future.

And so to the main event. Broadcast is an atmospheric intimate basement venue with great acoustics. No matter where you are you feel part of the gig. This also means the stage set up takes a bit of imagination. Toms drum kit took centre stage flanked by Matt and Adam, with their number increased to four for the evening with additional guitars/keyboards bolstering their already immense sound.

The band took to the stage looking every part the rock stars their music portrays. Matt looks like the bastard son of Frank Zappa and John Lennon and his stature means he had to be careful in a venue with such a low ceiling. With their long hair and floral/silky shirts the band and music they produce were fully congruent.

The band have recently released sophomore album Holy Doom, which I recently reviewed here, and the elation I felt on listening to the album at home was ratcheted up a number of notches on hearing the songs played live.

The wailing siren that welcomed them to the stage and introduced the pounding drums, crunching stabbing guitars and throbbing bass of Liar in My Head with complimentary melodic vocals set the tone for the evening. The band put everything into their performance and their energy didn’t let up all night.

The set contained songs old and new but for me it was the songs from the new album “Holy Doom” that had the most impact and made the biggest impression on me. Recent singles Be Your Man and Loosen It are instantaneous in their catchiness and the insistent bass and infectious guitar puts bands like Queens of the Stone Age to shame. The vocals and lyrics are delivered with a passion and often the joyfulness in the deliver belies a darker message.

On occasion the lyrics are shared by Tom and the light and shade offered in the combination of slow build and falsetto vocal of the verses and the dirty grungey guitars in the chorus of Runnin’ Around gives you a chance to catch your breath for a second. Whereas the intensity of the buzzsaw guitars and driving bass on Spinning Out along with Tom’s madman drumming drives straight through you. I could feel the music through my whole body with the sheer heavy power of the bass and drums travelling through the floor and making my heart pound. 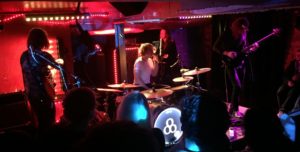 All too soon the set was through and the small but satisfied crowd dissipated and made their way to the exits or the bar with huge grins across their faces. The band had a lot of competition for gig audiences tonight with Massive Wagons playing elsewhere in the city and Dead Daisies supported by Glasgow’s own The Amorettes playing across the road in the Garage. I for one was glad that I forsook the sofa and brightened up a drab Sunday evening being entertained by this band who have a knack for a spectacular riff and a sunshine melody.

Demob Happy are on Facebook, and you can find them online here.