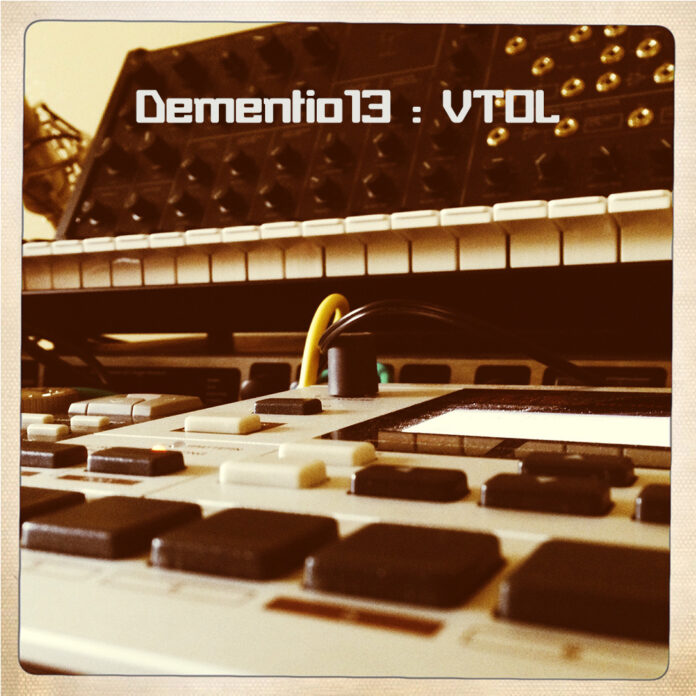 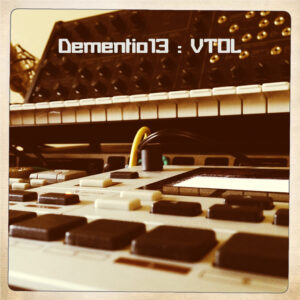 Proving that when it comes to making music there are no boundaries, Dementio13 refine and collaborate with an array of electronic talent to produce VTOL – a labour of love that leaves Nat Lyon privileged to share in its ambition.

Paul Foster has been writing and recording music for 25 years. In his latest incarnation, as Dementio13, he has influenced a number of UK artists as well as gained something back, contributing to his own musical evolution.  Foster makes very artistic, bordering on scientific, constructions of very deep grooves and uses an equally deep historic well of synth sounds.  In the process, Foster has also gotten himself out front on the post-rock soundscape.

OK, let’s back up a bit.  Paul Foster approaches beats like a combination of high mathematics and high art.  He travels light and works quickly, using a tidy set of portable synthesizers and samplers, a library of sound samples and a laptop. Foster also lives inside of DropBox, the cloud-based file sharing service.  Dementio13 is something like a loose collaborative that never works together in real time. The bits and bytes are digitally recorded, travel over the wire onto a laptop in Cardiff – and then transferred directly into the skull of Dementio13.  And that’s when it all gets very interesting.

Dementio13 co-produced and collaborated on last year’s folktronic gem by Laurence Makes Me Cry, The Diary Of Me.  On the album, Foster provided that thin layer of electronic gauze that was draped over Jo Whitby’s quirky and heartfelt songs.  The atmospherics were restrained, but extremely effective.  While Whitby and Foster often met socially during the period when The Diary Of Me was being recorded, all of the work required in the construction of the album was done over the Internet.

VTOL, the new album from Dementio13, gave Foster the opportunity to take greater control over the sonics and the content- and also allowed him to work with no fewer than seven different solo artists, each of whom had unique roles in shaping nine of the songs on the album.

VTOL provides an excellent sonic portfolio that demonstrates the dynamic range of Dementio13’s talent with compositions that range from spoken word, through folktronic, ambient, kraut-rock and techno.  People who think that artists working primarily in the electronica realm tend to carve a niche and stay in it will be sadly disappointed by this album.  VTOL moves, rumbles, pulses and gives the listener plenty to think about through a set of at times unconventionally structured songs.  The album is the product of more than a few highly creative minds, working in a variety of different ways- but Dementio13, as first-rate engineer and musician, sculpted and spliced the melodies and the rhythms creating a unified voice and theme to a group of people that hadn’t been in the same room.

Beat, texture and composition are at the centre of every track on VTOL.  Each song is expansive but the mix gives each layer a chance to shimmer.  Dementio13 is an artist in demand for his precisely constructed chaos.  But Foster is also an extremely creative writer and performer, with a memory for music and tones.  The samples and tones are a mixture of vintage and futuristic sounds.

There was no planned theme to the VTOL project.  Foster was doing his normal thing, sending data back and forth with collaborators, writing, recording, editing, repeat.  Most of the work was done this winter, a time of introspection and hibernation. On some of the tracks, like Snippet’s Alcohol, the Dementio13 touch was light, but noticeable.  On other tracks, such as Stelian (with Douglas Deep) and Genes (with Alone) the collaborators provided the raw mixed tracks and Foster arranged and recorded around them.  Theme Four, with Alun Vaughan, goes down-tempo low ambient, it’s rich in a field of overtones that features a brilliant bass performance by Vaughan.

For the most part Dementio13 provided some basic backing tracks and then the collaborators played off against them, free to add their own personal twist to the music.  Self Doubting Thomas (with Ian Thistlethwaite) is a techno-ballad that hovers as close as possible to the spoken word.  Long time collaborator Nita Disaster supplies three distinctive and engaging spoken word tracks (Finish Line, Pollution, and These Days) full of vivid imagery and vibe which Foster further processed and grooved.  Totally grooved.

One of the album standouts, Rodeo Days, Pixieguts (Marie Craven) is another spoken word track and in this case, Dementio13 took Craven’s pre-recorded words and wrote the music around them.  The track is beautiful and haunting, but mostly beautiful, with a sonically rich yet very dark cloud hovering over it.They’ve been doing this for seven years and have never met.

There are also four solo tracks on VTOL that provide transitions between the very disparate collaborative pieces.  The solo works by Dementio13 bind the album together and provide a musical theme which courses, in various levels of intensity, through the other songs on the album.  In each case the songs highlight Foster’s performance, engineering and composition.  The opener Creases blurs the lines between ambient and electronica and provides an introduction to those that follow: the composition is uncomplicated and the performance precise.  Puzzles has a kraut-rock/prog hybrid movement and allows Foster to go nuts in a very dense electronica forest.  The closer, Bondage Bus, takes us back to where we started the album.  You can practically see Harrison Ford driving his Blade Runner flying car.  And you want to be there.

VTOL is a post-rock statement for listeners as well as a teachable moment for DIY musicians.  Paul Foster is a hyper-collaborator, working with network technology as much his collection of hardware and software.  VTOL is cross-pollination and Dementio13 somehow managed to mix and process seven different musicians and give them a unified voice.  While the label of electronica might be off putting to some, the album provides an excellent guide to the future of music production.  It’s transatlantic chaos, it’s shovelling bits and bytes, it’s about sharing because you share a vision.  Dementio13 is teaching a master class here, so you should probably listen to this.  Like now – because he’s already way ahead of you.  Like those kids from Berlin, with their tiny little jackets.

You can stream and should purchase VTOL at dementio13.com.

All words by Nat Lyon, find his Louder Than War archive here.