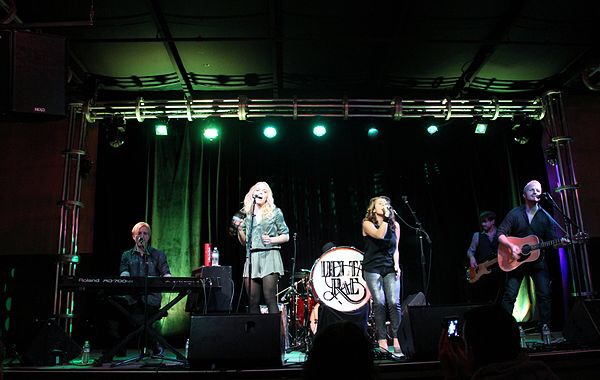 It is often said that the harmony of human voices is the highest sound of them all and tonight Delta Rae are underlining this yet again.

In one breath taking moment after another the North Carolina group are stretching the fabric of folk into shapes that makes that term look like a feeble prison for their verve and imagination. This is far more than old folk or hipster folk and music of its own dazzling brilliance that saddling it with terms does it an injustice.

The five piece band built around vocalists Elizabeth Hopkins, Brittany Hölljes and her brother Eric deal swopping harmonies and switching moods from sombre to ecstatic with a set that combines the visceral thrill of gospel to almost tribal stripped down drums with added rolling piano and sparse guitars. It’s all about the space and the sense of reverb that drenches their sound as they take the past and propel it into the future.

They have managed to arrive at a place that is totally unique and original that takes some doing when you consider a music event like The Great Escape has about 400 bands on it alone. This emotion drenched atmospheric music has seen them sign to the Sire label and release two albums that has seen them crack the top 200 in the USA and the rapt audience sat in the atmospheric pews of Brighton’s Unitarian Church are the core of what will a huge audience for them in the UK.

Like the clutch of bands that range from the Alabama Shakes to First Aid Kit they are drenched in the mystical past but have somehow found a clear road into the future with a twisted and brilliant vision. They so sound so 21st century that it hurts but without the bleeping sci fi desperation that the future seekers so often drench their music in.

It could be telling that they worked with Lindsey Buckingham from Fleetwood Mac on one track but that’s a red herring. This is a group that thrives on a minimalist sparseness, a backwoods dampness and joyous sexual celebration of the power of song. The closest I could think to them is the post punk outfit Young Marble Giants in terms of that sense of atmospheric space more than actual sound.

For a brief 40 minutes the whole world melts away and you are lost in a magical other worldly space and what higher recommendation to a band can you want?