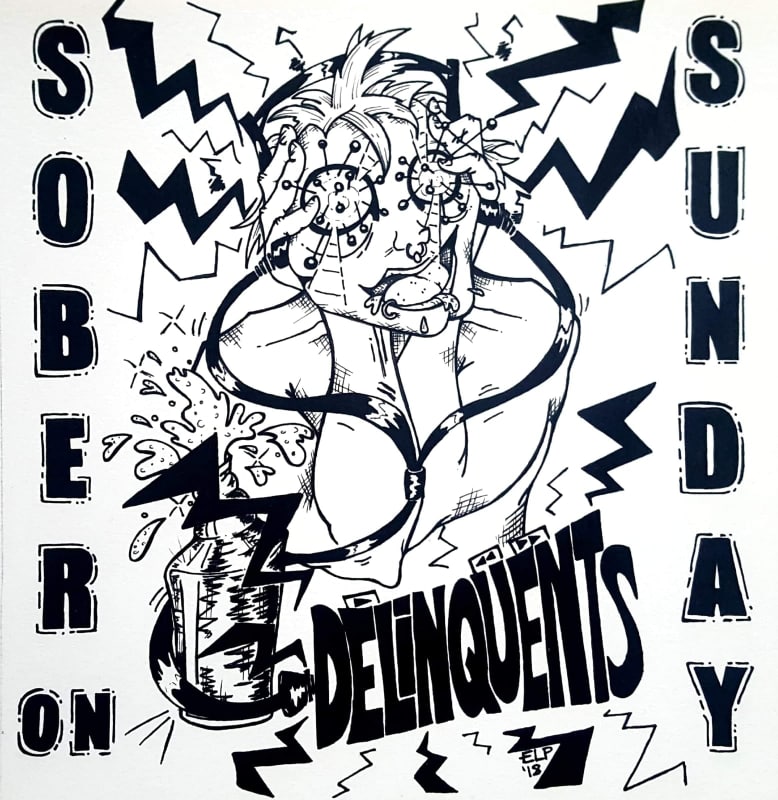 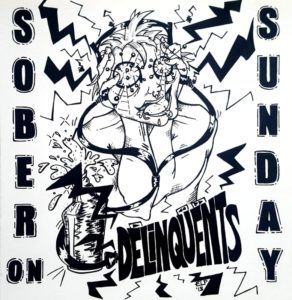 We reviewed Dundee band Delinquents Debut Album back in July 2017. This year they play Rebellion for the third year in a row, have released a song with proceeds going to a mental health charity and had a full-page feature in Vive Le Rock and now this EP…

More songs about drinking and not giving a fuck! Kinda.

Delinquents and their fans have a saying or slogan for when they are about to paaa-arty.  It is (and you have to use the strong Scots accent…) “Taps Awfff!”  which translates as “Tops Off!” Meaning, time for wild abandon.

In other words, ‘Lets drink loads and go berserk with our t-shirts off, punching the air and bellowing like a bunch of macho arseholes’ because after all, that is the way to impress girls and win friends.

Young punks from Dundee, Delinquents are what you might call a typical Rebellion/ Vive Le Rock band.  Young, Gifted and Old School rather than Art School hipster punk nouveau. Their starting point was undeniably Green Day but they sound more like NoFX or Rancid’s poppier moments now and have progressed without loosing their sense of fun and songwriting skill.

Delinquents are an instantly likeable, drinking-mans punk band. The fact they are not ground-breaking becomes an irrelevance once their hooks and choruses get stuck in your brain.

David Hennessy- singer, guitarist and songwriter had a few problems shall we say, and these are reflected in the other two songs:  No Disguise and Sinners.

No Disguise is a fast and furious ramalama punk-rock song but documents the realisation that breaking point has nearly been reached.

Sinners is acoustic with piano and is an admission of guilt and plea for forgiveness wrapped up in a nice tune which would go down well at a small venue or echoing round a massive arena.  It could be their stadium tearjerker but the band have no immediate plans to perform it live.

The EP is, I hate to say because it’s not ‘punk-rock’, almost “a song cycle which takes you on an emotional journey”: drinking is fun / has its consequences / it can leave you fucked up and full of self-disgust.

You can take it as that, or you could just crank up the volume and enjoy the first three short, smart, fast, kick-ass tunes and pretend that you don’t like “the soppy one at the end”.  When really you love it.

I like Delinquents.  In some ways an ordinary young punk band but with a talented songwriter in Hennessey and a shit-hot drummer in Ryan …. the bassist has been replaced – but the essence of the band will stay the same.  Hard on the outside with a soft centre. Bravado with a dash of sense and sensitivity.