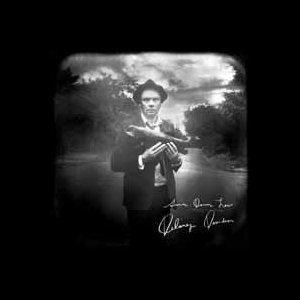 Delaney Davidson is the kind of trilby-wearing, bluesy troubadour that likely has the word ‘old school’ inked on his heart. If you like lo-fi, drive-along anthems that wear their influences on their sleeves then Swim Down Low is probably for you, as in indeed is most of his back catalogue.

Recorded in one week, on to tape at Outside Inside’s now notorious studio, this is an album that harks back to 1970s alt-rock legends like Lou Reed and Tom Waits at the same time as calling to mind the New Orleans swamp blues of the ‘50s and ‘60s.

Davidson’s sound throughout is his signature mix of slow strumming acoustic guitar with screaming, bluesy lead, all punctuated with frequent bouts of unconventional rhythm and disturbing sampling, just to keep you guessing. Davidson likes to keep the listener guessing, and never more so than on bluegrass ho-down Poor White Trash, a song that should probably have its tongue more firmly in its cheek, or country ballad The Beast In Me. As well as rounding of the album’s crescendo, which starts with Big Ugly Fish, a toe-tappingly frantic song that sounds like The Vaselines covering something from Mule Variations, the album’s last two tracks feature some incredibly well-played pedal steel guitar.

At times Swim Down Low can feel like it’s shovelling its influences down your throat. The references to catfish and doin’ deals with the Devil are a little too frequent for an album that draws more from the well of the European folk tradition and classic rock’n’roll than it does from the Cajun Bayou. That said, the extensive list of collaborators on the album do include Eric ‘Magic Fingers’ McFadden, James Hall and Mama Rosin, so it wouldn’t be fair to accuse Davidson of entirely posturing his Cajun connections.

This is by no means an upbeat album, the bluesy glue that binds it together gets into every part of it: the lyrics, the honky-tonk guitar, even the delivery. It is, however, an intense album. The fact that it was recorded in a week and using analogue production really shows in the focus of each track. It’s often said that digital recordings allow what’s recorded to be perfect, even if the band aren’t. That’s certainly not the case here as every component of each track, even the wailing distorted guitar on Old Boy (Terrible Times), slots neatly into a sound that is robust enough to support some quite odd musical pairings.

Everything about Delaney Davidson feels like it belongs to a different era of music. If that era doesn’t call to you, then there’s a good chance you won’t see what’s special about this album. But if it does then Delaney Davidson is doing to be a welcome record collection and, seven albums into his career, Swim Down Low is one of his best yet.

All words by Jon Madge. This is Jon’s first post for Louder Than War but when he’s done more they’ll be in his author’s archive.