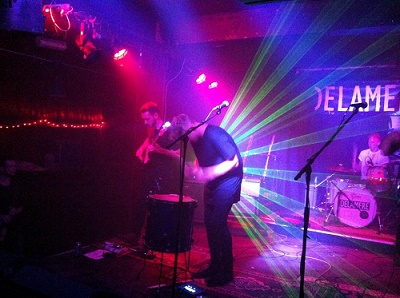 Delamere are on the cusp of something big, Dave Beech was there from the start and at Manchester’s Night & Day for the launch of their new single.

A major player in the Cash vs Common Sense debate that has scourged many a music venue across the UK in recent years, Manchester’s Night & Day was served an abatement notice last year. Rather unusually for this kind of matter however, it seems common sense has prevailed (though not when it came to the tenants signing on the dotted line and moving in to a property situated a stone’s throw from one of Manchester’s live music institutions) but rather in the venue’s doors are still open and we can, for the time being at least, still enjoy the very best of our city’s contemporary music in a setting steeped in history.

Tonight, as we enter the iconic venue, our expectations our understandably high. Having seen Delamere on their last single launch, it’s safe to say they’re a band whose reputation is beginning to snowball. As if to solidify their burgeoning popularity, the venue is already heaving and characteristically hot, despite us arriving in plenty of time to catch local lads, Skinny Roller.

Skinny Roller have been making a name for themselves in Manchester over the course of the last 18 months or so, but what’s most impressive (other than singer Mark Nangle’s choice of hats tonight) is how much they seem to have improved over recent months; their sound once competent but somewhat thin, now fully-realised, matured, even refined. It’s a welcome improvement from the band and one which makes it easy to get excited about what else they have to offer.

Of course, the band we’re all here to see is Delamere, and, ever fond of remixes, the opening somewhat distorted notes of a remixed version of previous single ‘Do You Want Me’ begin and the crowd pushes forward. 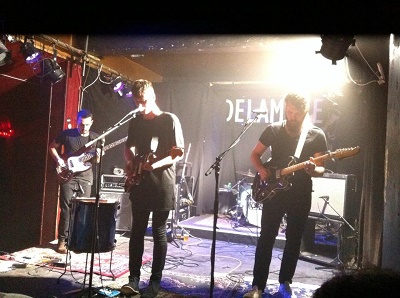 Atmosphere is very much key to Delamere’s sound, and tonight is no exception. Early track, ‘Vampire’ provides a certain shimmering chilliness, whilst following track ‘Do You Want Me’ makes for an interesting comparison; a more recent track immediately following one of the band’s earliest efforts and though both are equally as impactive as each other, the latter shows where they are as a band today.

With a set that’s comprised of old and new material alike (one track even without a name yet), it’s interesting to think which of these tracks are going to make the cut as Delamere’s repertoire expands. And even though older tracks such as ‘Heart’ and ‘Colour Me In’ fit in side by side with the newer releases, it’s a shame to think that they might not have much of a shelf life left, as the band inevitably crafts newer material.

We’re all here tonight for the release of ‘Headstrong’ and it comes in the set a little over the halfway point. The hype machine behind this track online over the last couple of weeks has been working overtime, and it’s impressive to see so many people singing along to a song that’s barely been released. Undoubtedly a testament to both the band, and the track itself, and it’s absolutely one of this evening’s highlights, much like set closer, and fan-favourite ‘Betty Boop’.

Having followed Delamere from early on and seeing them go from support slots marred with sound problems, to selling out both Deaf Institute and Night & Day, all in the space of a few months, it’s a fantastic feeling to see an act you had so much faith in going places they deserve. Though they might not be at the peak of their popularity yet, their sound suggests otherwise, and it’s hard to imagine the buzz behind them not exploding going in to next year and beyond.