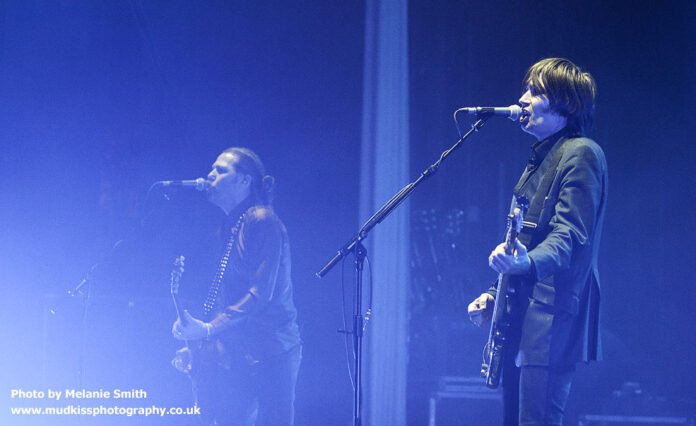 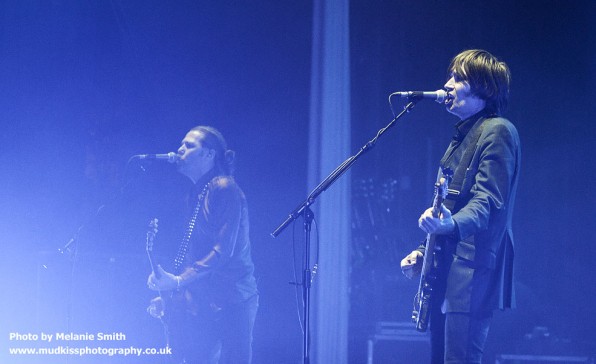 The 80s chart topping Scottish rock band Del Amitri, fronted by Justin Currie, are reunited after ten years and are currently out on what is dubbed The A – Z Tour, with all the original band and crew members. Louder Than War’s Melanie Smith, and her camera, caught the Manchester date.

For some of you the name Del Amitri sounds familiar but you might not remember what they sang, but if I said ‘Always The Last To Know’, ‘Kiss This Thing Goodbye’, ‘Nothing Ever Happens’ it might suddenly become clear. 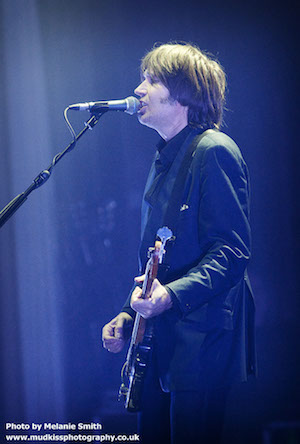 Justin admitted in an interview on TV recently that he was a little scared of going out on tour again, as the bulk of their touring took place when they were all in their 20s, and he is now 48. He went on to say the audience have grown with him. I can testify to that fact as I took my position on the sidelines ready to photograph in the all seated Apollo theatre, quite a large number amongst the all seated venue were substantially older than your regular gig goers, many flicking through their treasured newly purchased tour program, which was designed around the cover of A-Z maps.

The support band kick off with some delicious bright spotlights, and in walked two piece country sounding The O’s from Dallas, Texas. Bright and breezy, with a few wise cracks to lighten the mood, “I’d like to introduce the band….” which brought chuckles from the crowd, as there was only two of them. They were melodic and very Nashville, minus the cowboy boots. Toe tappers unite, yahoo!….

At 8:45pm and suitably warmed up, Del Amitri appeared to rapturous applause, singing their most famous hit ‘Always The Last To Know’, followed by ‘Kiss This Thing Goodbye’ under those dreaded blue lights, (which are the bane of every live music photographer). As the photographer I was only here for the first three songs, but it was obvious it was going to be a more sedate gig than the enigmatic Nick Cave & The Bad Seeds who held the Apollo captivated last time I was here.

Justin Currie and his band were all on top form which the audience fully appreciated; they begin to rise up from their seats, clapping and dancing. And from what I read in the aftermath, it proved to be a pretty spectacular show. I believe there were two thousand tickets sold tonight, not bad going at all.

Follow Justin’s tweets as he does a great line in humorous tour moans and groans, complete with photos, right now he is at complaint no32.

All words and photos by Melanie Smith. More of Melanie’s photos on Louder Than War can be found using the search box above. Her website is here: mudkissphotography.co.uk.