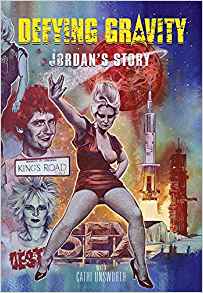 The last great story from punk finally gets told.

Make no mistake about it Jordan was one of the key faces of punk.

She was the face of the Sex shop, the scary figure behind the counter with a heart of gold and a non stop tirade of banger, she was with John Lydon when he did his famous audition for the Pistols, she was Adam Ant’s inspiration and manager, she was seeker out by Bowie and Warhol – she was the ace face from outer space who lived fast in the white heat of punk rock, crashed and burned and survived to tell the tale.

Decades later her striking image still stands out as powerful and challenging and enthralling as it once did. Part ballet dancer/part dominatrix/part Mondrian work of art she was ready and in place before punk even existed star trekking and en points fast forwarding to the future.

The real art of punk was far more complex and nuanced than a series of seven inch singles and guitar chords. The walking, talking work of art of Jordan is the heart and soul of the form even if she arrived fully formed before it had even started. Historians often gather around the corpse of great lost bands but Jordan’s imperious face and genius wardrobe tells you everything you need to know about punk.

A true original, Jordan was one of the last great untold stories of the maverick era, when anything went and the future was getting written fast.

Thank fuck then that, along with the great story teller and crime noir writer Cathi Unsworth, she has decided to tell the tale. The tale of a girl from the south coast who lived life by her own rules and her own imagination. Unlimited, wild and free Jordan embraced life without the fear that is beaten into most people. When punk arrived it grabbed the already fully formed Jordan as one of its icons and her Mondrian face and wild bouffant were prime inspiration and all over the tabloids.

Perhaps the only trick Malcolm Maclaren missed with the Sex Pistols was not making Jordan the fifth Pistol leaving the teasing clip of her on Tony Wilson’s So It Goes in Sept 1976, during the Pistols first TV appearance, standing on the stage, looking terrifying like an update on Gerard Malanga, the whip cracker SM hustler from the Velvet Underground but reimagined for the far more scary mid seventies UK nervous breakdown.

In truth Jordan was always her own woman and her role as the face of the shop that sparked the punk culture is set in stone. The book tells this extraordinary story with the dark thrill of a crime noir novel and the Dickensian cut and thrust of the great London metropolis that drew her in from her south coast home.

And Jordan was everywhere. The art provocateur and the ace face.

There she is in the shop telling the customers they should not be buying the clothes that were more likes works of art unless they understood them, there she is at the famous Johnny Rotten Pistols miming Alice Cooper audition by the jukebox, there she is the inspiration for a nervous Stuart Goddard leaving love letters around the shop for her before he reinvented himself as Adam Ant with Jordan as his muse, manager and close friend, there she is the ultimate queen bee in the scene cackling her life affirming laugh and full of fun and life and brilliant wild ideas. The book embraces this thrilling life and her relationships with the complex cast that reads like a Robin Hood and his merry (wo) men of the late 20th century – people like Malcolm and Vivienne, Rotten, Sid, Adam and the whole cast who shook down dopey UK in the late seventies.

If you want to define the true spirit of punk then look at a photo of Jordan before the scene ever even in existed. There she is in Malcolm and Vivienne shop, then called Seditionaries, looking like a terrifying, beautiful dominatrix ready to whip the terrified customers into shape – a brilliant vision of ballet dress, fifties chic and SM whips and leather that was a self made creation that came out of her own fevered imagination and was the greatest gift to the shop when she turned up one sunny afternoon after dancing her way down the Kings Road like a renegade swan from the greatest ballet of them all.

There are highs and lows, Punk was a breeze but then the hangover kicked in, the drugs got worse and so did the music. The book never blinks, as you would expect from Jordan, it’s unfailingly honest and full of the larger than life iconic woman who somehow reinvented herself as a vet and has re-emerged in the past few years as an equally powerful force, embracing her seventh decade as full of life as her teenage years.

Perhaps it’s this last chapter that is the most inspiring in a life that is full crescendos of great moments – this endless curiosity and cultural inquisitively that marks her out and the makes the book a manifesto of how to live your life on your own terms ignoring the cheap catcalls of the grey faced dullards and that is Punk’s most powerful statement and this book continues that boundary breaking empowerment and high decibel life.