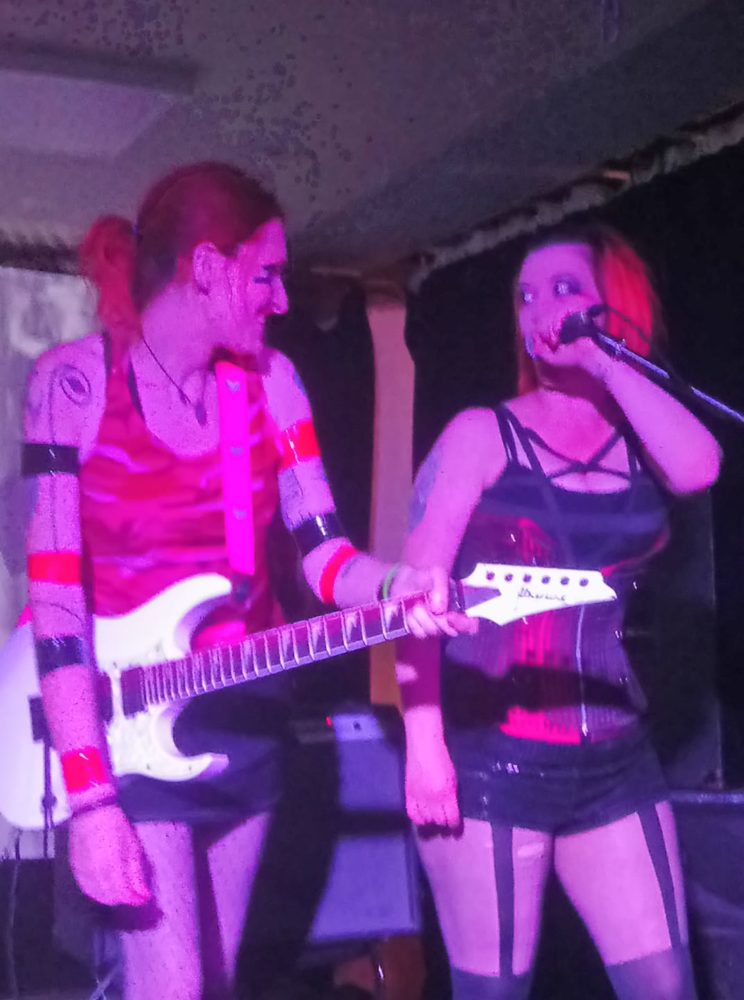 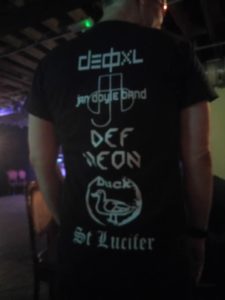 You may be familiar with musical face-offs, but how about a massive, sizzling synth-off? That was the feeling as two music collectives – Defsynth and AnalogueTrash – from Doncaster and Manchester respectively, came together to host five bands between them at Manchester’s AATMA venue; along with Anointed DJs. Louder Than War’s Emily Oldfield went along to find out…

It was a diverse mix; from sonically-charged soundscapes to visceral, violent walls of noise; and all the better for it – the ideal antidote to the so-oft bland arrangement of the usual guitar bands seen on a Friday night out. 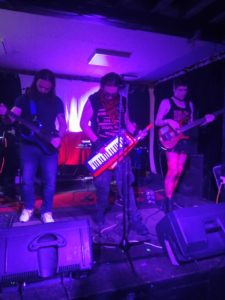 Up first were ded.pixel, a Manchester-based three piece delivering their signature sound of enchanting, accumulating layering – as if pulling the push of people around them into sensory immersion. The band overcame technical sound difficulties, to drive out a sensual surge of synths, loops and luscious strokes of keytar, topped with raw, hungry lead vocals. Frustrations faded into satisfying slabs of space-rock led by stunning guitar, with the likes of ‘To The Wolves We Are Thrown’ in particular thundering their politically-aware, powerful points home. Their ability to ascertain and evoke dystopic soundscapes which still tempt the listener in, conveying a powerful message in the process, sure is significant. 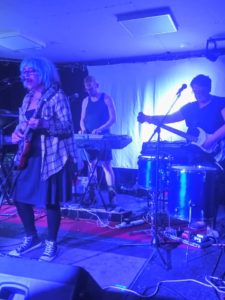 From space-shot-rock to synthy, wonky pop – it was a listener’s treat, as ded.pixel were followed by Sheffield-based Duck (Defsynth). A three piece capable of making a surprisingly energised and amplified noise-bliss. What I noticed was how well the soaring, almost celebratory vocals built with the accumulating instrumentation to carry the audience on a series of highs. The type of music which is satisfying both to hear and to dance to, as within minutes the crowd was a pulsing mass, with ‘Monsters’ a particularly memorable moment of the night, the build and breakdown of beats leaving bodies beating at the dancefloor. 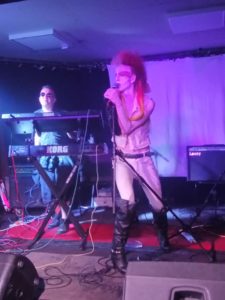 Jan Doyle Band (also of Defsynth) featured after Duck, originating from Doncaster, a theatrical fist-pump of dark electronica amplified with new romantic flair. Consisting of just two members during live performances, the band quickly gained gravitas thanks to impassioned, expressive delivery from frontman Derek Anthony Williams. Michael Stokes on keys wielded wild washes of futuristic force… resulting in a show which felt a little like punk pounded together with performance art, makeup, hair and musical release. Wading into the crowd, cavorting as if carrying the weight of the industrial elements, this was a performance people were sure not to forget in a hurry.

By the point of three bands in, the room was surging with heat and adrenaline… all in time to face the force of St Lucifer. Based in Manchester, this four-piece revealed a startling line-up change, with a new drummer- Alice – forever driving the rhythms home, and Charlotte Winchcombe on utterly stunning lead guitar which seethed through each mix with slices of metal-infused majesty. David Fox also took to lead vocals as well as guitar and keys, allowing for impassioned, angry articulacy throughout… ideal for fusing together with the gut-stirring force of John Mitchell’s bass. 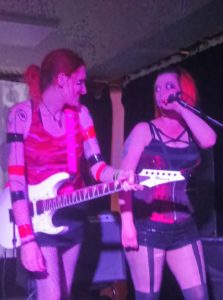 The songs were a blast: and I mean that in the literal and metaphorical sense – hot shocks of noise with a metallic edge underlaid by a glistening layer of dark dance. Pop songs for pounded minds. Particularly memorable points include the cutting depth of ‘Crucible’, contribution from Amy Griffiths (of Still Forever) adding sensuous vocal depth to ‘Raise The Dead’, a reworking of much-loved track ‘Hate Love Indecision’ (now with a glorious metal spiral shot all the way through) and a particularly punchy version of ‘The Enemy’, amplified with an enveloping, immersive guitar solo. ‘Junk Days’ was an utterly anthemic high. The set was sealed with St Lucifer’s title track from the upcoming album ‘Music is Violence,’ a colossal force of building pulses before plunges into almost break-beat noise. 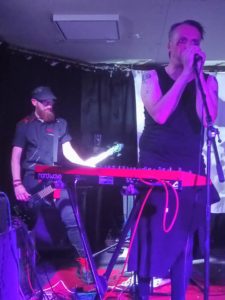 A set I could hardly walk at the end of, I think is a good sign for sure: St Lucifer showing progress and seizing new themes with a real dark drive, twisted energy and seething rage all rich in their sound. The use of captivating, cut-up films in the background all added to the intensity.

Yet there was opportunity for one further level of anthemic, utterly incensing energy – thanks to the final band of the night, DEF NEON. A duo from Wrexham consisting of Emily Celestine Gresham on vocals and bass and Michael Harmina on guitar and electronica… it is difficult to believe that is just two people on stage, creating blast-propelled, buoyant and explosive sound which slams feet into movement. Spellbinding, ear-bending guitar solos too… something not heard often in heavy electronic music. Rhythmic as well as resonant, they have perfected the art of cried-out vocals which seem effortless, combined with ever-soaring instrumentation, the dynamics swirling, diving and taking us on a daring delve into sonic reaches with every track. 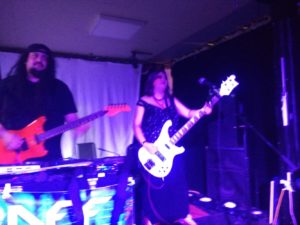 Favourites of the night included ‘Nightvision’(an utterly gorgeous beat-drop going on in here), as well two new tracks which drew out the dancing into a full-on frenzy – handling the dynamics between raw live noise, robotics and instrumentation with signature skill. And of course, not just one but two additional songs, ending on a searing cover of Rage Against The Machine’s ‘Killing In The Name’, which was completely transformed through pulses and electronic power into a dance-drive well into the night.

Followed up by delicious dark electronica from the Anointed DJs (Adrian Brian Thompson and Deany Sevigny), extending the immersion in exciting, engaging music, this was an event to remember.

Photography with thanks to Emily Celestine Gresham, Derek Anthony Williams and Lucy Oldfield