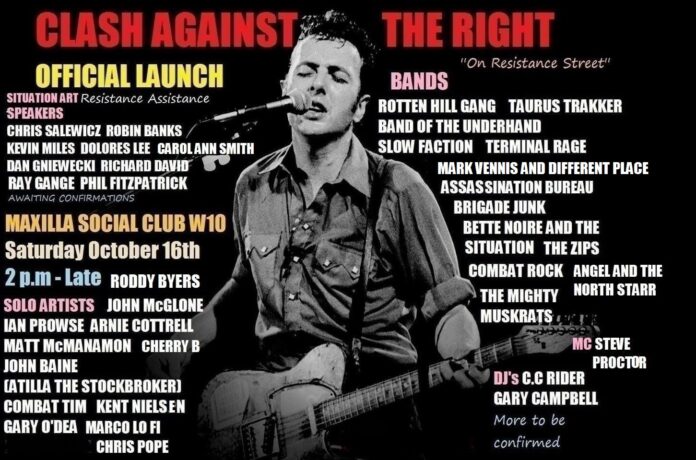 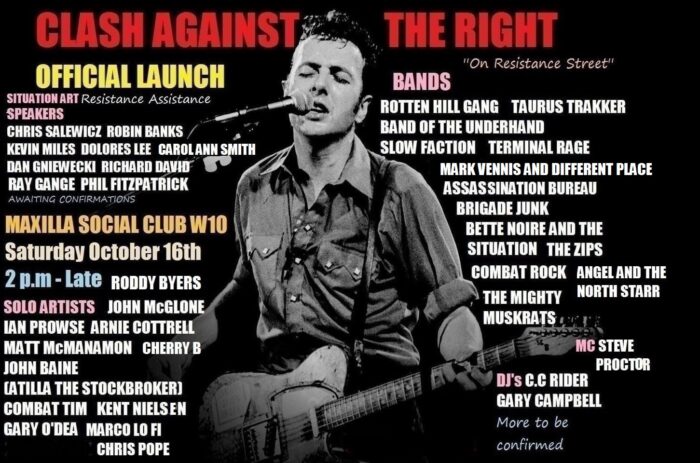 DEFENDING THE CLASH – WELCOME TO THE RESISTANCE

If you have read  Stealing The Clash Part One and Part Two you will know why the ‘Clash Against The Right’ Facebook group (CATR), now 3,200 members strong, came into existence.

When Boris Johnson attempted to appropriate The Clash as one of his ”favourite bands” during a Tory Party political party broadcast in 2019, it was followed by a sinister intervention inside another Clash group by a multi-millionaire Tory donor and friend of the Prime Minister, who had previously been disciplined for politically championing Johnson as far back as 2010. That guy’s surreptitious attempts – which amounted to nothing less than an attempted second Tory political broadcast when transcribed – to tell Clash fans that Johnson shared ”the same egalitarian principals” as Joe, Mick, Topper and Paul was met with a wave of repulsion and anger from true Clash fans, that mirrored by reactions from the surviving group members.

CATR came into existence in September 2020, following discussions between myself, legendary Clash Confidente and Iraq ”Human Wall’ ‘political activist Robin Banks and former Clash crew member Brenda Siegelman, from America. As Robin stated in a recent CATR radio show, ”We knew something had to be done” The history of all that can still be read on LTW, but to say things have moved forward since then would be a drastic understatement.

The ”Spirit of ’78” is still alive and kicking. On Saturday 16th October 2021, ‘Clash Against The Right’ will evolve into a fully fledged real life campaign organisation, staging Live Music showcases and other themed events across Britain and the western hemisphere.

The inaugural Launch event will take place at Maxilla’s Social Club under the Westway in Notting Hill, right in the heart of Clash territory. On that day, over 25 bands, solo artists and guest speakers will come together to present a united creative front against the Tories, Right Wing political perspectives in general and the accompanying shameless attempts to appropriate radical cultural figureheads. Joe once said ”People need to get something. We are Anti-Fascist, Anti-Racist, Anti-violence and pro-creative.” Indeed they were and importantly, still are. From October any future attempts on behalf of Johnson and his cronies to manipulate The Clash inside their political agendas, will be met with fierce resistance.

It’s not just ‘London Calling’. In America on Saturday August 21st (Joe’s birthday), Brenda Siegelman will host a celebratory ”Campfire” gathering of around 100 of Joe’s friends and Clash fans, from the American ranks of the organisation. There are over 500 American members of CATR, including a good number who knew Joe personally and who were as revolted as we were in Britain, at the events of 2019. A gathering of New York based members will take place a few days before that event. At Christmas in Belfast, the CATR Irish Branch will stage a 2 day event at Richard Barclay’s ‘Clash Bar’. That gathering will see plans for a major Irish CATR Live Music event in 2022 formulated. Following the London Launch, a date will be announced for a Manchester Branch event, hopefully at the fan-owned FC UNITED OF MANCHESTER football club. That will be staged in conjunction with the Pete Shelley Memorial Campaign and Phil Fitzpatrick’s legendary ‘Strummercamp Festival’.

A state of the art home website for the organisation will be constructed in the oncoming period. That will be accompanied by a series of CATR RADIO shows promoting the Launch and the goals of the organisation. Robin Banks and myself were recently interviewed by London based Cultural Campaigner and Radio Presenter Henry Scott for the first episode of this series, which will be available across social media and become a regular feature of the CATR website when it appears. The show was recorded and mixed by Andrtei Nicula of ‘The Black Olives’, in his backstreet studio in West London and can be heard above.  Future guests lined up include Joe’s biographer and renowned author Chris Salewicz, ”Rude Boy” Clash movie star Ray Gange and members of the legendary British Punk-Folk band ‘The Men They Couldn’t Hang’.

These are dark times and radical rock’n’roll music has faced cynical and barefaced manipulation on behalf of Right Wing mouthpieces. To see Nigel Farage splattered all across John Lennon’s Youtube ”Imagine” video at midnight on New Years Eve 2020, that in a shameless adverts for his ”Stock Market Financial Tips” company and laced with crass post-Brexit nationalism and WW2 flavoured phraseology, showed us exactly how deeply these exercises have become embedded. The sight of former NRA Spokespeople, speaking against Gun restrictions in America, on prime-time News whilst wearing Clash T-shirts, only further underlines this sordid trend.

We happen to think some things are worth defending. As such ”Clash Against The Right” will provide a platform for Bands and Artists, who wish to come together to oppose the general Right Wing political climate and the attempts to dilute radical music inside it. Defending something worthy is a positive energy and we are not playing here. Most of the power might be in the hands of those rich enough to buy it, but not all of it. And some of us are not too chicken to even try building a resistance culture. In their musical career, The Clash changed many, many thousands of lives permanently. Some of us have never forgotten the impact they had upon us and in many ways, they are now more relevant than they were at the height of their powers. The Clash have transcended the parameters of popular music. Their songbook now stands as a mighty engine of non-conformist rebellion and resistance. Their songs have become huge ‘Folk’ vehicles in the absolute truest sense of the word.

And one thing we know for sure, as Robin Banks said upon the original formation of CATR ”I know in my heart, that were Joe here, he would be 100 per cent behind this radical and much needed fightback,”

People can apply to join the CATR Facebook group here. Tickets for the London Launch event will be available from mid-June and will be offered to group members first.