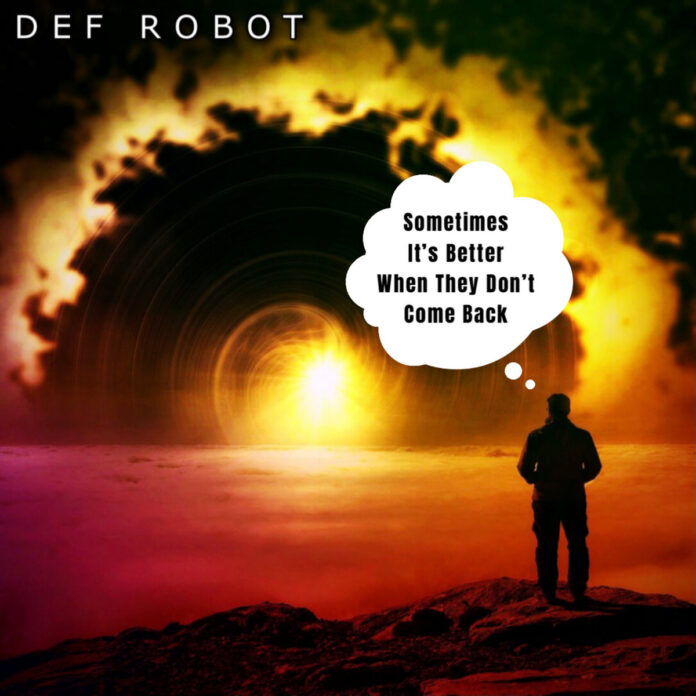 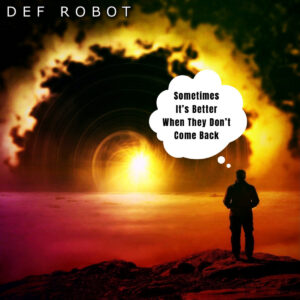 Sometimes It’s Better When They Don’t Come Back

Def Robot are back once more with album number thirteen which is bursting with more new ideas and comes across as strong as ever. Taylor and Hancox are ready to hit the road with live sets that are going to keep everyone guessing with their sprawling back catalogue that spans only two years. Yes, you’re reading that right. Wayne AF Carey gets his usual track by track wisdom from the Kendal Manc-cake Paul Taylor…

“The powers that be have failed us. Trusted to have our best interests at heart, instead they have looked after themselves. It’s time for a change at the top…”

A futuristic number with a great space sounding intro layered with sweeping guitars and a Floyd-esque bassline. It spins and an out and bounces along with a top as fuck anthemic chorus.

A Walk In The Future

“Time travel. There are times I’d like to do the form of time travel that’s theoretically possible. Sleep through this crap and wake up in a better future!”

A mellow start with a tribal drum beat and an industrial background and haunting bass matched by Paul’s now familiar vocals for Def Robot fans.

“Greed is bad m’kay. Unfortunately, we have a British government that is grabbing as much as it can and the poor are paying for it. Milking money out of a disaster is criminal.”

Starts with a killer riff, some great double drumming with a crunchy bass and an angry rant about our corrupt government. Goes all glam rock at one point.

“A mash up of ideas/ideals between the Kill Bill films and the Kill The Bill movement. A rant about laws that are usually applied by oppressive states, that don’t allow peaceful protest and even the right to show dissent against rogue governance.”

A dirty bass riff and distorted vocals that has hints of The Cramps and the spirit of Keith Flint flowing right through. a proper rockabilly number and a slice of futuristic punk that sounds top as fuck.

Evil In My Eye

“This song was on the first all brand new recorded Kerosene album after 20 odd years away. We fancied having a crack at it!”

A cracking little tune that sounds like Muse on speed! It blasts straight in with a rush and the chorus is just magestic. A proper roller that hits you in the face with pure anthemic power. One to see live. It’s just full of funk and that guitar solo sounds like they’re having fun big time!

“Being away from somewhere/someone for a long time and just having a memory of it like still life. A statue in your mind. Hoping everything is still there when you return, but fearing all is now changed.”

A slow burner, maudlin and touching with a tribal feel that builds slowly and Taylor brings out his inner Leonard Cohen to great effect. An accomplished bit of songwriting from the musical magician, unleashing his bag of tricks that twist and turn on every album. Love the pissed up sing along at the end.

“David takes a vocal turn with a song from his legendary teenage band Tim, bringing it up to date for 2021.”

Hancox takes over on this one. All Floyd-esque intro with some amazing drumming, a chugging riff complimented by that mesmerising bass. His whispered vocals drag you in to a gothic chorus with crushing guitars and glittering skill throughout.

“Couped up like a vampire for what seems like an eternity. Fearful of going back out into the sunshine (if we ever get any!) and returning to ‘normality’.” Is anything ever gonna be what it was?”

A proper Led Zep like drum intro that slows right down into another goth tinged number that crunches around your head and rushes along in a stream of sound that sounds dark as fuck. A nightmare scenario that has a sense of paranoia yet works and has the classic seventies fade out

“People that talk a lot but never listen. Arrogance that only their opinions matter when really, we should all be open to what others think. Otherwise, how do we improve as humans?”

An intelligent song that describes quite a few people I know in this world of social media. A glam stomper that flirts with ska and has something to say to people with dodgy opinions and a stone cold wall of “I’m right you’re wrong” A message to the keyboard warriors…

State Of The Union

“Originally on the ‘Def: I Cult’ album. Redone with Kerosene drummer Chris Willcocks  who has done a great job on the tub thumping for this album.”

What Paul says here. Another Def Robot anthem with added drum power from the old school of Nineties bands that made an impression on the scene I was emerged in at the time. A romp of grunge indie that ends the album on a high with a happy tone that Taylor and Hancox excel in.

Def Robot play their DEBUT gig at the Salty Dog, Northwich with The Battery Farm and Leon The Pig Farmer with a GuST cameo on Friday 13th August.