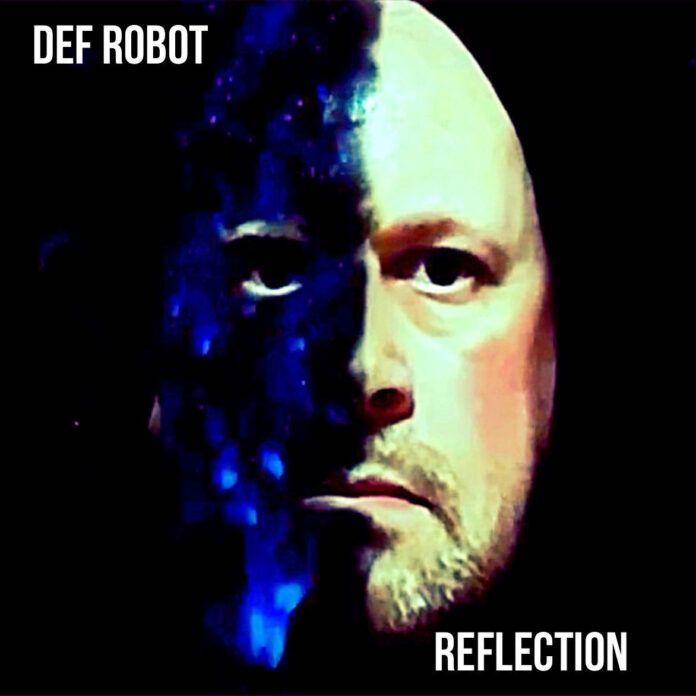 Lazy bastards Def Robot return with a cracking double A side to start the year before the release of their 11th album in two years with the Spinal Tap inspired title We Go Up To Eleven. Paul Clarke, sorry Taylor gives me a bit of insight…

“Reflection is a comment on authoritarian governments destroying and censoring art. Bit like how the Tories have given no support to musicians and would rather they died off.

Original Soda Queen rails against celebrity leeches who get famous off their other half, without much talent of their own.”

“Founding members Paul Taylor and David Hancox originally met in an alternate universe, eons ago. In 2019, we found a way to communicate and collaborate. Def Robot was thus born. After recording and producing their first 6 albums with various contributing musicians and guest vocalists inside the 1st year (David resides in Berlin, so the logistics are a bit tricky!), Paul set about putting together the live band in his adopted town of Kendal.

Drummer Paul Schwarzer was discovered cleaning Taylor’s windows. His rhythmic knocking on the door, to request payment, was an early indication of his drumming prowess. Bass player Adam Hughes, worked as a waiter in a cocktail bar when Paul met him. Seriously! That much is true. Guitarist – Rob and Simon – keyboards, were jamming friends of drummer Paul. We set about rehearsing to play gigs that were arranged from March 2020 onwards. Then lockdown came and we had to put our tour dates back to another time.
Back to the studio and collaborations!”

Reflection is pure quality. A keyboard led dream like tune which gives a nod to Depeche Mode. It’s an ear worm that gets inside your head after a few listens. Original Soda Queen steps into pure grunge mode with its quiet loud stop start movements led by a great guitar riff. The total opposite of Reflection. How this band are not massive yet is beyond me. I’ve said before that you can’t really put them into any genre. They’re like magpies, taking bits from the vast back catalogues of their favourite bands and melding them into the myriad minds of the Def Robot machine.

Def Robot have now released 10 albums. After great press and reviews, plus radio play around the world, including BBC Introducing on many occasions, the band are going from strength to strength, continuously writing and pushing the boundaries of their songwriting. The 11th album We Go Up To Eleven is being recorded for release this summer. It features Paul Taylor on vocals, David Hancox on instrumentation and Chris Willcocks (Kerosene) on drums.