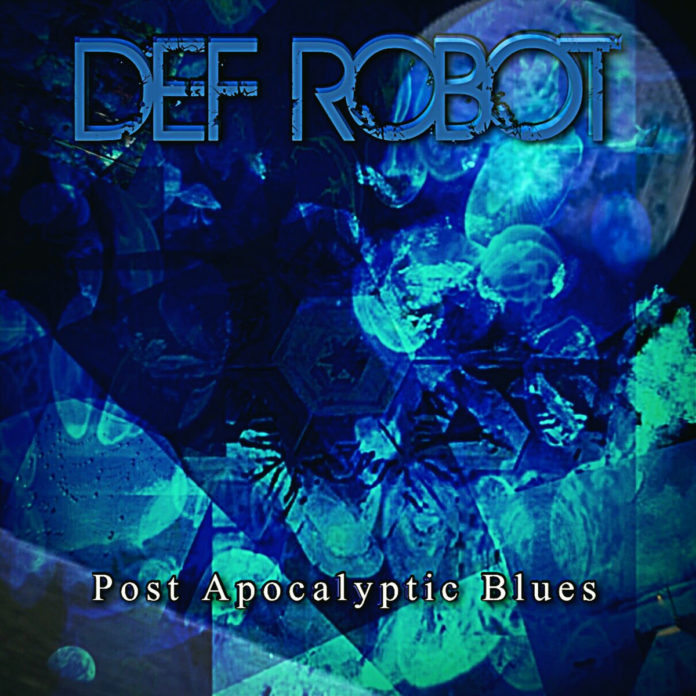 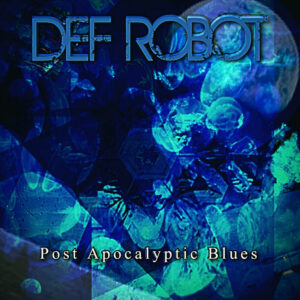 As we enter the *enter your own number here* (who knows what day or week it is now) of lockdown, Def Robot keep us entertained with their album defining the times. The appropriately titled Post-Apocalyptic Blues. The prolific Northerners share 18 more highly addictive original compositions highlighting their talent for a hook laden melody here, a wry lyric there and always a strange element mixed in for that extra air of mystery.

On what is possibly their 52nd album of the last 12 months the band show no desire to let up or go down a lazy formulaic route. OK, I exaggerate, but the work rate of this band is phenomenal. The eighteen tracks here are all instantly recognisable as Def Robot, but that doesn’t mean they are all a particular “style”.

On Post-Apocalyptic Blues you can expect a bit of rockabilly surf or some 80’s indie jangle. A slither of full on punk rock, grungy Americana, little idiosyncratic melodies and just for good measure a Lynchian epic.

This isn’t the sound of a band resting on their laurels, and it isn’t a band pushing out content to fulfil a contract. Def Robot display a passion for what they do, they wouldn’t put 18 tracks on an album unless they were happy that all 18 had a place. The fact that I don’t once find myself looking for the skip option tells a story in itself.

Kicking off with a brief palette cleanser the louche Snake Oil, the short introit gives way to the vibrating bass of Matter of Fact which quickly layers grungy guitars and unveils its full glory mixing a Throwing Muses/Pixies element with a 90’s UK guitar band sound. Be ready, E.M.A is over in just over a minute of full aural punk rock assault. There we have it in a nutshell in the first three tracks. Don’t divert your attention for a moment. You’ll miss something, a surprise, a shock to the system, a nuance…there is something here or everyone.

The speeding surf guitars on the instrumental, Assassin, make it feel like a long-lost theme tune to some 1960s TV show, the rockabilly surf theme repeated on The Kaiser a couple of tracks later. These two tracks sandwich the uproarious cutting comment on Boris Johnson as he bungles his way through his premiership. Somehow though he is being made out to be a saint in the last couple of weeks, the lockdown obviously melting many people’s ability to think straight and wiping their memories. The ultimate definition of hypocrisy was seeing him applaud the NHS having previously been cheered by his colleagues when they voted down a pay raise for nurses. Anyway, back to the music.

Play This When I’m Gone nods to their previous album of (almost) the same name. Shades of Female of the Species on this one. Another nod to 1990s “indie” – He’s Lost His Mind could have been a dancefloor classic on the indie disco dancefloors of the 1990s, a powerful bassline throughout and as the song breaks halfway through it takes on a folky indie guitar jangle, reminiscent of James

And so, to the Lynchian epic that is Julietta 1969. The nigh on 8-minute striking production reveals itself initially with quiet brushed drums adding vibrato riffs that wouldn’t be out of place on a Julee Cruise song from the soundtrack of the ground-breaking Twin Peaks. The band layer atmospheric keys adding to the eerie feel. The song is then taken to another level…Beg…Borrow…Steal starts the chant as the momentum lifts and introduces sinister guitar parts. These develop into sonorous mini-echoed solos returning to the ominous chanted words. The ever-present brushed drums and vibrato riffs underlying the final singing guitar parts perfectly as the song reaches its sorrowful climax.

Real Estate shakes you back into reality from your other worldly feeling with its bouncing beat, crunching guitars and soaring vocals. And just before the album ends Here and Now is a magnificent uplifting anthem, powerful driving guitars and staccato snare lifting the spirits.

The final track is ominously real for the current times…How Will it End starts with someone apparently struggling to breath before it breaks into a Velvet Underground Black Angels Death Song-esque strings and drums cacophony…How Will it End?

That is only touching on the glory of this album, potentially one of Def Robot’s best to date. Just because I haven’t listed every single song on the album doesn’t take away from the magnificent of songs like Confidential or the laid-back splendour of Trip Over Again. Don’t take my word for it though. Head over to Bandcamp and check it out for yourself.