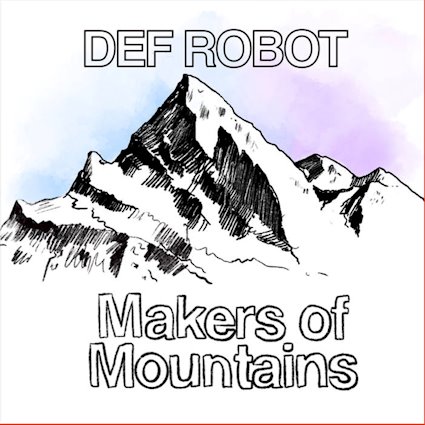 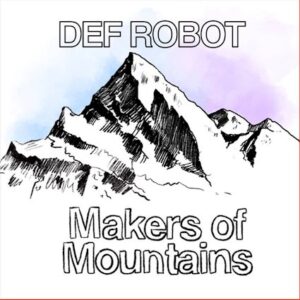 Debut album by the Cumbrian duo Def Robot provides a strange mix of all sorts that you just can’t put into one bag. Wayne Carey tries to decipher this weird bag of tricks brought to you by two revived 90’s musicians releasing their talents after quite a few years out. And it’s all good.

Paul Taylor and David Hancock have come a long way from those 90’s Kerosene years. Teaming up again under the alter ego of Def Robot, resurrecting Kerosene, fuck, they’re busy again! Paul enlightens me on what’s going on in his head.

“We had imagined a sound that varied from the edginess of bands like Fugazi and Pixies, mixed with an alt American country sound, like Wilco. Also a bit of laid back slacker rock along the lines of Pavement and Dinosaur Jr. There’s a decent amount of Manchester’s 80’s and 90’s alternative/indie scene thrown into the pot too. In these times of immediate access, we believe and love, the idea of getting stuff out there once it’s ready. We have a very punk ethic, of write it, record it, release it. We can write a song one day, record it on the second day and release it on the third day. That to us, is thrilling and scary in equal parts.”

And it’s all that. Unlike a lot of albums where the first song is upbeat to try to drag you in, this does the reverse. Falling Apart Again sounds doom laden yet beautiful with echo chamber like effects and smooth laid back guitar and drums. A strange opener which has grown on me each listen. Mover And A Shaker moves into the above mentioned 90’s indie scene sound, catchy as hell, killer chorus and clever hooks throughout. Fall On You is a dark little number that has a film noir soundtrack feel to it. Proper chilled  haunting stuff with a lovely chiming guitar sound.

Sweet And Sour is pure Bunnymen in sound, lovely sounds that could easily be lifted of Ocean Rain which is a high compliment. Fortune Cookie Writer is a short but sweet weird bastard fuck of a song full of effects and LSD like madness. The tempo speeds right up with Ferman Saved My Life (CUT!) which goes along the same lines of wonk noise a la Fugazi / Cabbage and is the closest they get to politics. A nice stormer of a song that works on all levels with that dirty guitar sound.

Pieces Of Me is another nod to The Bunnymen with it’s McCulloch like vocals swerving a bend and running into Nick Cave having a spliff with Richard Hawley. Haunting stuff again.

Just when you think you’ve got your head round their sound they go and fuck with you on next track Gordon From Gordon. It’s punk as fuck with a Pixies type sound and chugs along like a rocket. Fuck know what it’s about but they do get the line “Gordon Is A Moron” into it. Proper breath of fresh air which shows how diverse this duo can be. Long Time Dead is like a 60’s California pop song, psychedelic as fuck, catchy as fuck, Tarantino like guitars, movie soundtrack written all over it.

Last Stop Coney is fuckin brilliant. It reminds me of something else but I’m having a mental block here. Short and to the point with an excellent guitar refrain crashing in three quarters through. A triumph of a track to end this startling debut.

The trick with Paul Taylor and David Hancox is they have this skill of using soundscapes to great effect and they produce killer hooks and choruses. And it’s so diverse it’s scary. It took me a few listens to get it, however I think this is a gem that everyone needs to hear. Not long winded, just right to make you want more.

Keep up with Def Robot