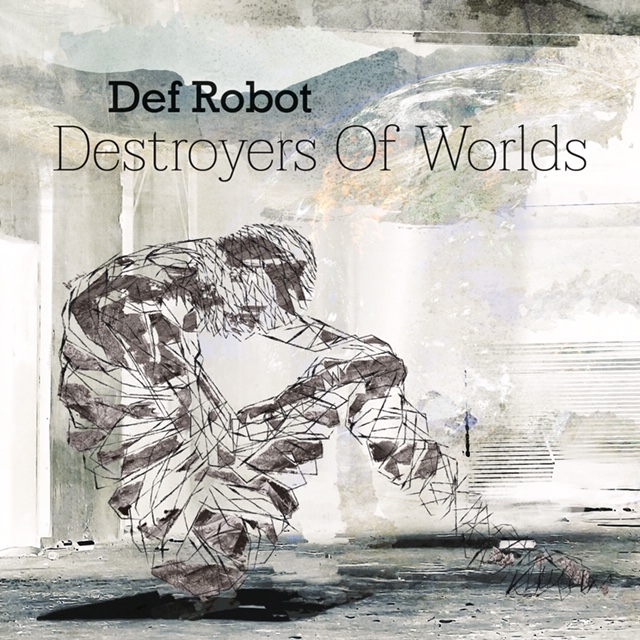 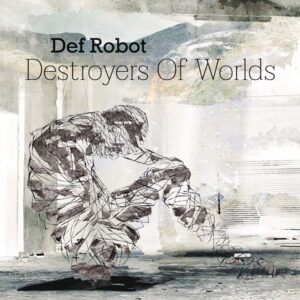 The strange Cumbrian duo of Taylor and Hancox are back quickly with their second album of the year, full of gems that don’t fit into one genre. It’s another mixed bag of influences and definitely not your average indie by numbers. Wayne AF Carey is dragged in once again to the weird and wonderful world of Def Robot. Paul Taylor tells me why they’re back so soon.

“Having brought in new guests and band members, we got the spur to create another album. The songs on Destroyers Of Worlds, range from an ode to Frank Black, memories of Manchester, technological overload and making the most of the present. Our heads are overloaded with ideas and we need the release valve of Def Robot to get them out! Meanwhile, we are getting the live band together and rehearsing, with a view to playing gigs in the new year.”

Unlike the first album, the opener Frankly is a dark gothic number with echoing drum rolls and a nice guitar refrain which goes all psychedelic on our arses towards the end with loads of fuck off feedback. My Human Is Broken then just totally changes direction and sound. They turn into a Depeche Mode like industrial sound with it’s robotic rhythms and catchy chorus. Raindrops is a clever tune which sounds eerie as fuck with some spooky sound effects straight from the sixties and has a hazy LSD like feel with an infectious chorus yet again which is what the duo are good at.

Cockroach has that dirty lo-fi guitar sound crunching in which reminds me of early Pavement. A strange little number with ethereal vocals and strange sounds going on in there. A simple riff but powerful enough to drag you in. Get In The Game stays lo-fi and has a football terrace like feel with a razor sharp guitar effect flowing through the vocals. Remind Me Of You is a pure nod to The Jesus & Mary Chain. A well crafted song with cracking melodies and definitely influenced by the Reid brothers. Would be A listed if the right people picked up on it.

Next tune Manchester Clever is probably the weirdest track on here. It about David’s experiences with his wife when they were students in Manchester as he explains: “You’re never as clever as you think you are. You can have all the paper qualifications you want, but nothing beats the wit that puts you in your place quicker than a good, honest Manchester put down.”It’s a sample of a conversation running over a experimental soundscape of noise that builds up.

An Old Song is the nearest you’ll get to a normal indie number as is Distractions which are close cousins to their Kerosene days. Anthemic indie rock with clever choruses and hooks as usual. Closing track Chips Are Down is another contender for a single and is the longest track on hear. It reminds me of Doves in their heyday until the cracking guitar solo kicks in to change direction and rocks out in style.

This is totally different from the first album as they have decided to experiment more with guitar effects and different genres from the last. It’s a good move as you don’t know which direction they’ll head next which gives you an idea of how good these two songwriters actually are. For fucks sake, they’ve almost recorded album number three. I think they’re trying to make Mark E Smith look like a lazy bastard!