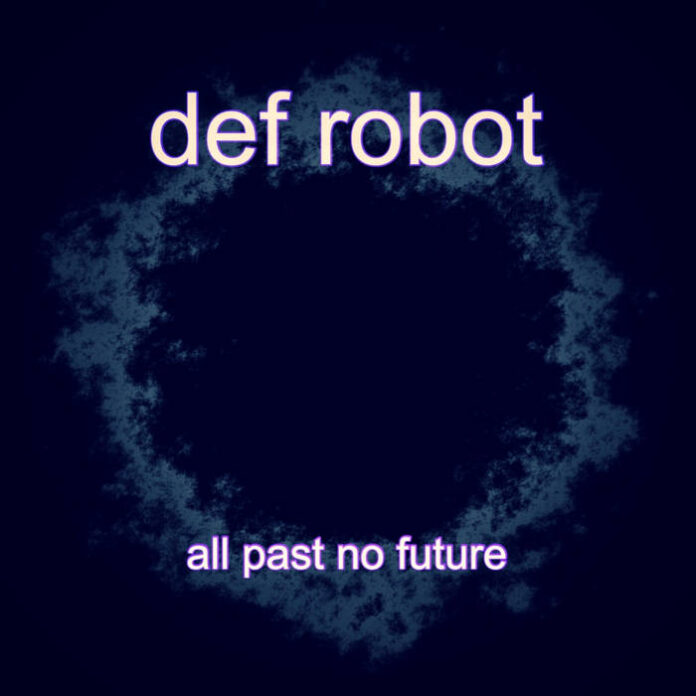 Def Robot: All Past No Future 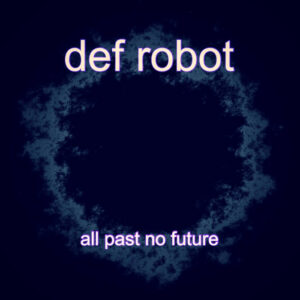 Def Robot are at it again with yet another album (number 15) and the output is as varied and unpredictable as ever. Wayne AF Carey captures a track by track run down from the prolific duo and the sounds in his own words…

This is astonishingly their 15th album which also features 4 songs written by Slouch – a Manchester based band from the 90’s which contained David Hancox (guitar and vocals) and Chris Willcocks (Who provided drums on most of these tracks). Alan Broady has also provided various keyboard parts.

Paul – Soft Machines – Also tying in with the original idea for the band name Def(inition) Robot, the theme on this is humans being made to be more robotic and tied to machines and computers. We increasingly aren’t ‘allowed’ to just be human.

A futuristic slab with a touch of Numan that delivers a catchy chorus and lights up the room with dayglo and has that classic 70’s fade out.

David – Cookie – A collection of words that came out of a box of 90s Slacker rock fortune cookies.

A fuzzed up bass heavy fast as fuck punk tune with a rasping vocal rant.

Paul – Life In Transmission 1-4 – Littered through the album are these 4 short pieces that are venting frustrations of modern life.

Paul has four rants over random noise, road rage, government control, nervously waiting for something to happen and taking control of his own destiny. Great splits in between the quality gems you’ll discover on here.

Paul – Bad Show – A whole load of time wasted on something that isn’t worth it. Films and TV shows are being churned out at an alarming rate to fill schedules on god knows how many channels.

An atmospheric guitar intro layered with keyboards and the Manc tinged vocals from Taylor, who again delivers a killer chorus. A belting piece of indie electronica.

David – Academy – I played the Manchester Academy once, apparently. I’d sold out – the venue didn’t.

Probably a nod to Kerosene signing to Sire back in the 90’s. Another big hitter with a hint of alt punk Americana.

Paul – New You – Inspired by the recent film ‘Swan Song’.

A dark atmospheric tune that slows down the pace. A trip hop beat with haunting keyboards that turns dream pop into nightmare pop. Eery stuff.

David – Weller vs Westerberg –  Has the makings of a dull no score draw.

Another punk blaster lasting just over a minute. Exhilarating and punchy!

Paul – Reloaded Up – An electronic rework of the song ‘Loaded Up’ from previous album ‘We Go Up To Eleven’.

Full of drug references – “Bring my little friend to the party” A nice little bit of guitar worked fused with some funky electronica and another anthemic chorus.

Paul – Medicine – Bad jobs and being stuck in one!

A menacing bass line packed with a belter of a drum beat, crunching guitars and a chugging riff. One of the highlights and a nod to their love of grunge and Pixies.

David – PW – ‘Punk rock guilt is coming to get ya!’. Ian Mackaye writes a song and others turn it into a militant ideology.

Another punk number cranked to eleven. Has all the stop start elements and hits hard with a loud as fuck riff. Short and sweet.

Paul – On The Air – The sense that someone who is no longer around is still part of the world in some way.

The atmospherics are back with this mellow gothic tinged tune and the eery keyboards that flutter in and out. A nod to The Horrors on this little beauty.

A fist full of wonk going on in this DR standard that shows they have some kind of formula going on sometimes, as Taylors choruses are becoming a bit of their trademark sound. How many songs have these guys got stored in there?

Paul – Coffee – An imaginary psychiatrist talks to an imaginary mass murderer. I’ll leave it at that!

A stunning ending to the album that goes all horror noir and has some disturbing lyrics as described above. I love the dark element that DR bring to the party. A bit of a Goth classic that unnerves yet sounds massive when the chorus crashes in. Another highlight. Dark As Fuck…

The ideas keep coming and you’ll probably expect another five albums at least from the most prolific band in the North. They’ve crammed so many ideas on this album, it borders on insane. One of their best releases yet.