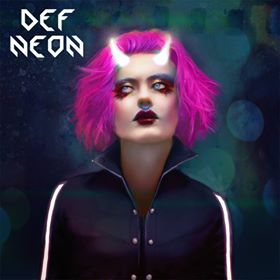 DEF NEON’s tracks have an alluring quality – they make you feel like you are interrupting something – and there’s a weird thrill to it. Forget the usual arrangement, their debut 10-track album, released November 2016 on AnalogueTrash Records, contains a number of tunes which throw you right into the mix, as if the song has already been running a while. It is this intense energy combined with their use of electro, rock and synthpop which makes their sound so infectious.

Not only is rapid immersion in the tracks quite refreshing, but so is their gutsiness in combining dominant guitar with catchy synths; they are a band from Wrexham keen to question our assumption of ‘electronica’. A little like the Pet Shop Boys collaborations (such as when they famously came together with ‘Electronic’ and especially the pop-rock pleasantries of ‘Blur’) – they keep the beats, but boost the rock.

The album crashes open with Rotoscope, a pulsing bassline with powerful vocals ‘Don’t say a thing’ – and the immediacy with which the audience is involved allures us to listen in. It’s well-worth it, as although electronica is initially strong in the mix, it shatters into an immense guitar solo. But is it too early in the album for something so powerful? Nah, say Def Neon. Their ability to fill every track with stand-alone power yet still be cohesive as part of an album is impressive; like they’re capturing mood shifts.

How so? Rotoscope gives way to the following track Destroy, although there is a similar direct, almost confrontational tone to the vocals ‘you’re not listening to the sound’ – it is a clearly more robotic, dance-orientated mix with echo thrown in. DEF NEON want to confront the audience with new scenarios, something different each time, it seems. The mixed male and female vocal on Damaged takes us away from the individual and towards a contemplation of other relationships.  But does it create a complete whole, a cohesive feel?  Not always – but the fragmentary feeling at times could be seen as creatively intentional. Stan Bush is a big influence here, with tracks which go up and down in their intensity. Listen to the original ‘Transformers’ soundtrack and you’ll find out why; this is music with movement involved.

‘If you could picture a club full of people dancing to all the different rhythms in this; the sight would be seriously impressive’

High Hopes in contrast, plunges into vocals, the repeated lyrics of ‘insides breaking’ proving that this is a group which doesn’t shy away from emotionally exploratory sound. This ‘exploration’ is emphasized in the variation within the tracks themselves, as High Hopes then heads into a slow drum pattern, washes of electronica – even stints of near silence. Reflecting the rhythms – exciting but intense – of the modern day? Perhaps; the alternating intensity of social media, technology, updates, alerts. If you could picture a club full of people dancing to all the different rhythms in this; the sight would be seriously impressive.

But it’s not just the sound which conjures up imagery; I do feel that the tracks get lyrically stronger as the album progresses. In High Hopes for example, certain lines stick in the mind like – ‘a production line made especially for two’ , emphasizing that this is a series of songs reflecting modern life and the means by which it is ‘manufactured’.

‘No wonder they are a treat live’

Closing with ‘Stop’, it seems an adequately-titled song to give self-contained closure to an album of great movement, both aurally and emotionally. No wonder they are a treat live, with a number of headline shows and festival appearances already under their belt. This has included high-profile support slots for The Orb, 65daysofstatic, Death in Vegas, Pop Will Eat Itself, The Birthday Massacre, Syd.31, The Algorithm and Sonic Boom Six. Listen out for much more. 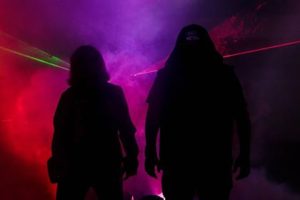 To find out more about DEF NEON you can visit their page on the AnalogueTrash site: https://www.analoguetrash.com/def-neon.html and find them on Soundcloud: https://soundcloud.com/defneonmusic