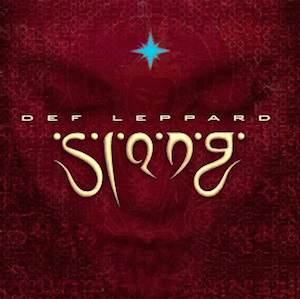 Hard rocking Brits, Def Leppard, change tack on their 1996 release after a massively successful period. How does the album stand up, nearly two decades on?

Def Leppard will always have a place in my personal musical history, for it was on the tour in support of Slang that I went to my very first gig; Def Leppard at the Nynex Arena in Manchester. Terrorvision were the first band I saw (as they supported!) but it was still a Def Leppard gig. I was 13 or 14 years old. When Slang came out I remember loving the album out of blind enthusiasm, and taking my first steps in trying to compete with my Dad’s vast record collection! So to hear it was being reissued interested me a great deal to see how I reacted to the album revisiting it with a greater musical knowledge and palate myself.

The reissue is packaged within a classic double CD case, that slots nicely on your shelf and is a lot more robust than those flimsy deluxe CD packages; so that’s a tick in the good column for packaging! Musically, I am pleased to say, the album still stands up. The bands intentions to record in a more live environment are showcased from the off. Opening track, Truth, is a very heavy track. Joe Elliot’s distorted vocals on the chorus sound edgy, raw and quite scary at times. The opening crash of riffs and drums also has a raw edge to it. It is much better than the original version on offer as part of the bonus material. An Eastern tinge is brought to Turn To Dust before the album’s title track. Slang sounds cheesy to me at times, however it has an infectious groove and the band still regularly play the song live. Another of the up tempo offerings come in the form of Gift Of Flesh; a straight up, head down rocker in the vein of Retro Active single, Action. It is in your face, and the live feel of the production helps the track along.

Whilst the band are no strangers to rocking hard, they have always showed their desire to pen a ballad. All I Want Is Everything is everything you’d expect from a mid nineties rock ballad. It has Elliott’s rugged vocal over a slightly moody guitar line leading the music. Blood Runs Cold is a different proposition altogether. Harmonic guitars slow, swinging drums make for an emotive epitaph to the bands former, and sadly departed guitarist, Steve Clark. The track feels like a cathartic moment for the band. Where Does Love Go When It Dies has a more folky feel to it, before the haunting and dark Pearl Of Euphoria finishes the album in towering fashion; quite possibly the best and most epic track on the album.

Of the extra material on the reissue, there is a good range of inclusions that will satisfy fans. There are several early mixes of songs (some with different names; Anger and Black Train) that show the genealogy of songs from their initial rough mixes to the finished article. All On Your Touch is a track the band has revisited for the purpose of this reissue. There are also versions of the tracks with Phil Collen and Vivian Campell flexing their vocal chords on the initial mixes. As well as these inclusions, there are the standard deluxe edition appearances of the single B-Sides from the era.

One the whole, Slang is never going to compete with the band’s 1980’s period, however, it is a good album. Some of the song writing is excellent, and the production of the album still sounds great some 18 years on. Considering the album is borne out of many struggles (the death of Steve Clark, illness and run ins with the law), the band should be commended for going away and changing their approach when they probably could have turned to Mutt Lange and produced another hit laden monster of an album. As Joe Elliott states in the liner notes of the album, it is an album that the band feel kept them together.