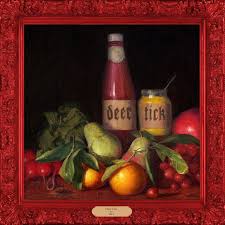 For the first time in four years – not long really, considering world cups, Olympic games, etc – Deer Tick issue an album, or two. The chance to express their dynamic range and branch out into indie rock, country, pop, punk, Americana, folk and a whole lot more.

Following in the occasionally time honoured tradition of releasing two albums at once (Guns N Roses and Springsteen in the early 1990’s come to mind) rather than go for the double option, it offers the ‘contrasting and complementing style’ option of two albums rather than two albums in one, if you get the drift.

The ‘quiet and reflective’ comes in Vol.1, Sea Of Clouds opens the set with a vocal that crosses a Liam Gallagher/Bob Dylan sneer in an alt country coating. Introspective and observational, lyrically dealing with inner struggles and conflicts, the more familiar Deer Tick signature, it veers towards the more maudlin with ‘Hope Is Big’ where there’s talk of feeling the cool breeze on invalid knees. In contrast, hope springs eternal on ‘Only Love’ which is a more lush string touched arrangement, yet all in all, Vol.1 is a distinctly subdued and considered set. Well reined in and essentially the calm before the storm. Like Springsteen’s Nebraska experiment before throwing the kitchen sink into Born In The USA.

Vol.2 therefore is the ‘loud and raucous’ – the punk inspired garage rock version of Deer Tick. Rowdy and boisterous. You can almost sense the relief and the palpable electricity in the air, amps buzzing and fizzing, not quite turned up to eleven, but by comparison, certainly in overdrive adding a daring element of distortion and sustain to proceedings. Power chording away with a vengeance and driving punky rhythms ensure a rawness in two and three minute blasts of energy. Somehow, it also gives the vocals a more distinct attitude, exemplified on SMF (the ‘shitty music festival’) making sure that the humour and the bite remain at the core. REM with balls, American rock and roll passed through a country and new wave filter, a pairing that sees Deer Tick, checking in at all bases.

You can watch the video for Sea Of Clouds from Vol.1 here:

You can watch the video for Jumpstarting from Vol.2 here: