Growing up in a small town has as many negatives as it does positives – strip away the idyllic Kinksian cavalcade of bowling greens and ivy-proofed pubs and you’re left with a more accurate truth, one of living in each other’s pockets, submerged in a goldfish bowl where everyone can see in but no one can jump out. For Stereophonics, this fueled their first, and their finest, work, the deceptively clever Word Gets Around. “Is anyone going anywhere?” Kelly Jones asks. Who knows, but they’re certainly not going far.

Jones, bassist Richard Jones and drummer Stuart Cable had been playing together on and off since they were barely in their teens, and it was that small-town closeness that helped create their diary entry-esque debut. Despite the music being bathed in a Britpop glower that was, at the time, about to go the same way as Rick Witter’s shoes, lyrically Jones was streets ahead of the pack – songs of suicide, sexual abuse, suburban spinsterdom and smoky pub philosophies chimed with the uncertainty of life and the mundanity of certainty. As Kelly wrenches during ‘Not Up To You’, “how do you know your last swing weren’t the last for good?”

It’s the clever juxtaposition of serious subject matter and fist-pumping anthem that gave Word Gets Around such, well, buzz. The singles were soaked in fuzzy but familiar distortion, but beneath the bluster lay Jones’ creative writing, which inherited the same kitchen sink pathos of Noel Gallagher but cast a lingering look more in the vein of Smiths-era Morrissey. ‘A Thousand Trees’, its familiar chorus recalled by Jones from a prophetic matchstick packet, was written about an alleged sexual abuse scandal lobbied at a popular football coach, a sadly all-too-topical subject that lays bare the cruel reality of a world where being manly and scholarly separate the crime from the truth. “He taught our Steve, he even trained me,” “growing seeds won’t believe why he’s been away,” “his picture gathers dust in the bar”…Jones had the ability to pass the baton of gossip through different bar glasses and demographics, without losing touch of reality.

With its sprightly buzz and suburban angst, ‘More Life in a Tramps Vest’ provides light relief, Jones’ despair at bagging groceries a neat contrast to his mournful reflections on the heart-wrenching ‘Local Boy in the Photograph’, where death and loss are summed up in the line: “the train runs last for the first time.” With its opening chime and pounding chorus, ‘Local Boy…’ gave the band one of their most recognisable hits, while also hitting new heights of bathos. 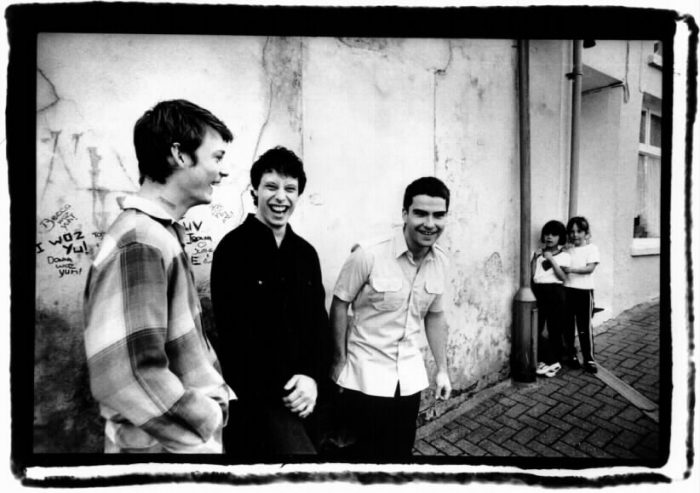 Growing up in a small town provides plenty of self-reflection, as well as a desire to progress and escape. This is encapsulated in the folky strum of ‘Goldfish Bowl’, where a smokescreen of drunken has-beens play out their twilight years and Jones hopes to god he doesn’t end up the same. ‘Traffic’, with its Slacker-esque alleged vignettes, is perhaps the only moment on the record where it feels like Jones is trying too hard, an A Level English Literature task played out to a moaning acoustic motif.

At this point, Jones’ unique selling point wasn’t so much that unmistakeable voice – a honeyed roar mixed with a delta blues howl – but it’s certainly on show during some of the record’s more poignant moments. The nagging riff and Cable’s robotic drumming propel ‘Not Up to You’, but Jones ever-growing yearn matches the irascibility of the song’s almighty shrug (“who’s to know…whatever”), while he’s allowed to let loose on the more rollicking ‘Too Many Sandwiches’, a bad wedding played to good music. The most arresting moment, though, is ‘Billy Davey’s Daughter’, where Jones muses on the passing of one of the locals’ kin through drowning, before launching into a gorgeous falsetto that betrays his usual gravelly bellow.

Word Gets Around is Stereophonics’ finest work, where Jones’ talent for putting the microscope on the mundane is fleshed to perfection. They’d achieve mainstream immortality with 1999’s Performance and Cocktails, but it is on their debut where you find the band thirsty, reflective and swimming, not drowning.

Stereophonics are on Facebook and Twitter. Their most recent record, Keep the Village Alive, is out now.