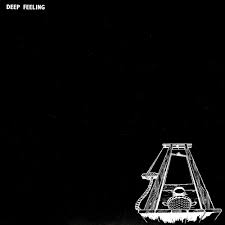 The complete recorded works of the Harmony Pop/Prog Rock band Deep Feeling, including their sole album and single sides…Ian Canty wonders how a band could combine two seemingly disparate styles into a pleasing whole….

Guy Darrell was a very talented singer and recorded extensively in the 1960s (see here for a review of the compilation of his solo singles entitled I’ve Been Hurt), mainly in a Soul vein. As the new decade arrived his latest outfit, the Guy Darrell Syndicate, changed both their name and their modus operandi. Darrell reverted to his real name John Swail and the band was remodelled in a more “progressive” style and renamed Deep Feeling. Guitarist Martin Jenner, Dave Green on bass, drummer Dave Clare and Derek Elson on keys made up the rest of the band. For the first two this change meant they could finally have a chance to flex their considerable songwriting muscles. To make the break with the past complete, no reference was made to Darrell’s past career in any of the Deep Feeling publicity material.

The first recording that emerged on the Page One label in 1971 showed the strengths of the newly retitled act. The single’s top side was a cover of the old Contours/Berry Gordy number Do You Love Me? and this record and subsequent singles would have more in common with the kind of symphonic, beautifully sung Pop Music the Bee Gees had perfected during the latter half of the 60s, than anything much to do with the Prog Rock explosion. There is a lovely warmth to this, they tease out feeling from the song and accompany the great vocals appropriately. There’s not much of the instrumental grandstanding that you might have expected, but this offering is all the better for the treatment applied. The band nudged at the lower end of the UK charts, though it was a shame such a pristine Pop nugget did not go higher.

The flipside Move On could have comfortably fitted into Darrell’s mid-60s Mod Soul set – very danceable indeed, with a real groove. The follow up was Skyline Pigeon, an Elton John/Bernie Taupin song that Darrell had cut previously for Pye Records way back in 1968. It didn’t achieve anywhere near the success of the debut single, this was of course just before Elton John made his breakthrough – timing was everything and on this occasion they missed the window of opportunity and the record flopped. After this slight setback the band moved onto the DJM imprint and for their first waxing with the new label they went back to the template of their debut. They slowed the pace of Bobby Freeman’s R&B favourite Do You Wanna Dance to a tranquil trot replete with heavenly harmonies – it was another minor marvel and restored them to the edge of the charts again, just falling short of scoring that elusive big hit single.

The self-titled debut album (also sometimes called “Guillotine” after the sleeve cover) arrived in the Winter of 1971. It certainly had much more of a progressive tint than anything the band had set down on tape previously, but still the material is darn catchy in its own long-winded way. The front cover of the sleeve was plain black with a small cartoon Guillotine in the bottom right corner and inside was a creepy drawing with photos of the bands’ heads growing out of a tree branch. So far, so early 70s Rock. Even so the opener Welcome For A Soldier has the kind of choral approach that wasn’t a million miles away from the dreamy harmonies of the Beach Boys, not a typical gambit in the Prog world. They paint a luscious landscape despite the fatalistic nature of the lyrics.

The album’s centrepiece is the band’s version of Classical Gas. It is certainly their most Prog moment, long and full of changes of emphasis and time plus some natty instrumental set-pieces. This is right in the Prog-riffing mode, but the light touch Deep Feeling possessed means the 8 minute running time does not seem that long at all. Probably better that you listen to this than I describe it, so there you go.

A shortened version of Country Heir, a piece of self-explanatory Country Rock, was extracted from the LP as a single, with the slowie We’ve Thrown It All Away on the b-side. Meeting with little in the way of success, it would be almost a full year before Deep Feeling were heard from again. Switching labels to Phillips, they reappeared with the Sunday Morning Leaving single in October 1972. This one was another strong offering, a fluid guitar line and again some traces of Country in the outro. Though again appealing, it disappeared without trace and the band busied themselves recording under a variety of aliases (including the National Shinguard Company!)

Meanwhile, Darrell/Swail’s 1966 recording of I’ve Been Hurt was starting to played to wild reaction on the Northern Soul scene, resulting the record being re-released. It made number 12 in the charts and he and the band ending up appearing on Top Of The Pops in 1973. Boosted by this success, Darrell resumed his solo status, which effectively ended the career of Deep Feeling. As a postscript there was a final single by the band, a cover of the Stones’ Lets Spend The Night Together, treated in much the same, slowed down way as the debut single. It was another sparky bit of Pop but didn’t make any headway. The flipside Avalon was dramatic treat though and showed that the band could always pen a decent tune themselves – a great Jenner/Green original.

The vocal abilities of Deep Feeling set them apart from the great-coated Prog hordes and they were dab hands in the art of constructing stately Pop music pieces. In reality, they weren’t a Progressive band in the true sense of the word, but they did manage to assemble a concoction that was novel and sometimes quite beautiful. For me the singles are the pick here, but for anyone more Prog minded, the album is a peach. Sadly only Derek Elson is still with us from the band to see their oeuvre finally gain a re-release – hopefully people hearing this for the first time will listen to what Deep Feeling had to offer – a potent and bewitching brew indeed.