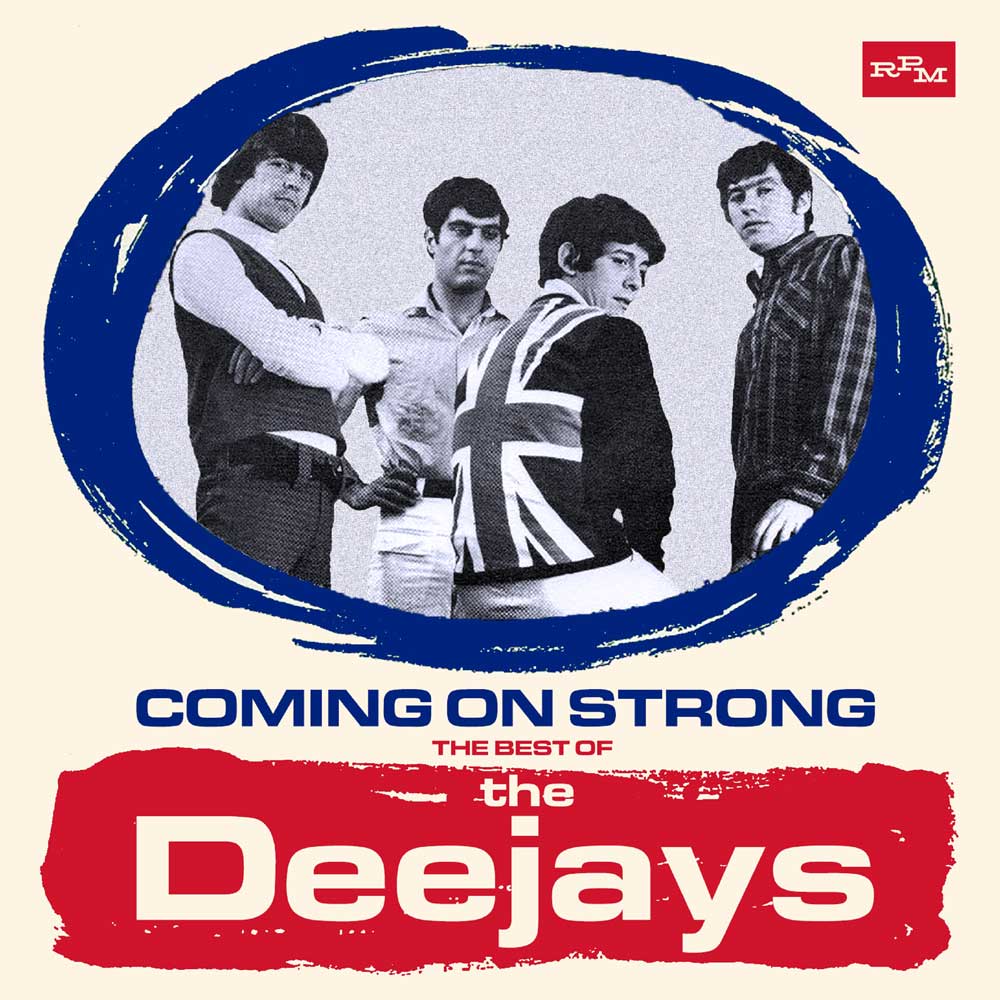 Subtitled “The Best Of The Deejays” this is the first UK retrospective of the South London Mod band who became a huge deal in Sweden, with links to the famous Sarstedt family and Abba…Ian Canty afjords (sorry!) their compilation a hearing……

Though the Deejays no doubt could kick up mess of raucousness with the best of them (when provided with the right R&B gear as this CD proves), they sidestepped what was probably their fate of endless Marquee support slots and pirate radio “hits” by a single stroke of luck near the beginning of their existence. Whilst playing under the elongated moniker of Johnny Vallons and the Deejays in 1963, they were seen by the Spotnicks manager Roland Ferneborg. Suitably impressed, he invited them to do some gigs in Sweden and this would lead to the band initially signing to the Swe-Disc label. This chance meeting would work marvellously for the band, as they hit the charts many times there and stayed for about five years of almost solid success.

Johnny Vallons and Derek Skinner soon jumped ship, leaving the band a drummer and singer short, so John Murray came in as a frontman with Erle Morgan assuming responsibility behind the kit. They joined the already in situ Pete Clinton and Buzz Nelson who played guitar and bass respectively. Quickly moving onto the larger Polydor imprint, they released a version of the standard “Long Tall Shorty”, which is where we pick up the story on this CD. Virtually every 60s band covered that track, however the Deejays’ take was suitably frantic and chaotic to make it stand out from the pack. It managed to climb to the Swedish Top 10 which was the start of their extraordinary run of success there. Much like The Rokes with their fame in Italy, while it was akin to Beatlemania in their chosen foreign haven, they couldn’t get arrested back home.

After cutting their eponymous first album for Polydor, they soon switched labels to Hep House (at this time Morgan was replaced by John Watson). This label had been set up by The Hep Stars, who included in their number a certain Benny Andersson (of course he was later of Abba) who produced some of their records. This move did see the band hit the charts regularly, but the material they were asked to record as A sides tended towards MOR and outmoded styles. Indeed they were recording things like the Freddie And The Dreamers song “I’ll Never Get Over You” in a Beat fashion straight out a ’63 in 1967. This must have rankled a bit for what was on the face of it a rough, high energy sort of outfit – looking at them glowering on the cover of this CD in their Mod/Pop Art gear they didn’t look short of attitude. It must have had some detrimental effect, as John Murray left and the youngest scion of the talented Sarstedt family, Clive, came in on vocals.

In fact as he joined the band they hit the number one spot with Baby Talk (not included here, a bit of a Dave Clark Five knock-off 3 years too late). Thrown in very much at the deep end, his first work was on the follow-up Bom Bom single. The flip to this was an excellent raunchy stomp through In The Midnight Hour, taking the original in a driving Garage fuzz manner to a totally new place. One of the best recordings the band ever set down in fact. After recording a second album entitled Haze (5 tracks from it are included here) which took them in a more modern Psychedelic direction and a number of less than successful and anachronistic singles, the band folded for good.

The Deejays problems were twofold really. The link up with the Hep Stars meant hits, but the quality of material they had to record was sadly lacking. This was band who were at their best at full throttle, for the most part restrained by MOR songs and arrangements. The other thing was, like a lot of 60s bands, they didn’t really have strong song writing skills of their own, or at least weren’t allowed to develop them except on album tracks. When the material was there, they could be trusted to put in a powerful performance of tough R&B/Freakbeat which most times took cover versions on in a no-holds-barred and thrilling way.

This compilation carefully picks its way around the more commercial covers that ironically gained them most of the big hits in Sweden, instead concentrating mainly on the more vital and upbeat Deejays recordings. I would think the track selection far more reflects what the band would have been like in front of a live audience, loud, powerful and full of attitude. Early on they set about with gusto the kind of songs that many Mod/R&B bands all over the place did like I Can Tell, Long Tall Shorty (good version that) and I’m A Hog For Your Baby. The tough Mod Pop thump of the self-penned Blackeyed Woman is a great piece of proto-Freakbeat and the tough versions of Dimples and particular Tobacco Road stack up well against anyone else’s attempts.

The songs from the second album prove that they could adapt to changing trends in a way you would have not expected when listening to that Freddie and the Dreamers cover. Striped Dreams Checked Fear is as trippy as Psych Pop got and Far Apart, Why? also was no slouch in that particular field. On the cover of Summertime Blues though they’re back on “home ground” by fuzzing merry hell out of the old standard. Coming On Strong shows the Deejays in a certain light and one that suits. Perhaps you do not get the full story of the Deejays here, but you do get the best story.