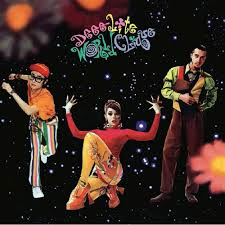 Two CD bumper reissue of New York Dance/House/Rap trio Deee-Lite’s debut album, including a whole disc of remixes. LTW’s Ian Canty feels old because we suspect he remembers thinking this was music for youngsters back then…

On the face of it, it would have been pretty easy at the time to take a quick dislike to the New York Three piece Dance outfit Deee-Lite. They had the kind of ultra-trendy image that would have made them shoe-ins for Chris Morris’s trendy-bashing series Nathan Barley if it had been made 15 years early. They were kitted out in the latest wigged out fashions and were doyens of the Big Apple’s club scene, plus they had the thumbs-up from the legendary Boosty Collins. All this may have added up to the “total package” but they also could easily have come off as achingly, teeth-grindingly “hip” and perhaps too premeditated for some. But that was until you heard the irresistible Groove Is In The Heart, probably one of the best pop singles ever, which skilfully managed to cram Funk, Psychedelica and Hip Hop into one insanely catchy trip of pure pleasure. You all know what it sounds like, heaven.

To add perspective shall we take a quick skip back to 1990? Whilst Madchester took shape in the North West of England, on the other side of the Atlantic De La Soul were really doing something quite revolutionary and Deee-Lite were part of the general thrust of good vibes coming out of the US. As Hip Hop became more and more a complete parody of itself, lost in a mountain of gold chains topped off with a Kangol hat, DLS stepped back from the dumb macho posturing and gangsta accoutrements to make a bright, humourous and truly great record called Three Foot High And Rising. The floodgates opened and so did minds – you could do anything with turntables, samples and a microphone, not just slag and brag.

Deee-Lite were obviously more song-based but the samples and breakbeats they used were unique and the ’60s-derived vibe shared common ground with the architects of the Daisy Age. Also, I always felt like they were a Dance Music update of the B52s, kooky Monkees/Redd Kross-like way-out vibes and fashions united with a solid dance beat. In Lady Miss Kier they had a striking focal point and seductive lead singer, with the band having an intuitive and inspired skill with moulding sound too. Groove Is In The Heart was a massive worldwide hit and jettisoned Deee-Lite from a club scene novelty to the very forefront of music culture. Such massive initial success can be a bit of a curse, but undaunted they readied their debut album.

Though perhaps nothing on World Clique is quite as immediately pleasing as Groove… there are still a load of delights (sorry) on the album. The band utilised the some of the cream of Funk musicians with JBs brass titans Maceo Parker and Fred Wesley joining Bootsy Collins in contributing, which laced their work with an authenticity which belied their scenster status. Some of the tracks on the LP do feature that “plinky plonky” house piano that was everywhere at the time but now dates the record rather. However there are more instances where they seem ahead of the game rather than just on the cutting edge for 1990. For instance What Is Love is a bit like the kind of restrained, sexy Electro-beat that Air made their own five years later.

My personal favourite of the whole record is Who Was That, if only because it is one of the very few pop records powered along by a Casio VLtone rhythm beat (the only other one I can think of is the Fall’s The Man Whose Head Expanded). Taking that to one side for a moment, the song itself is an excellent Funk/Gospel mix.

Smile On is great too, with some fine Fred Wesley trombone mixing well with shuffle beats. Good Beat is a real groover, no wonder it was pulled off the album as a single, some cool vocals from Miss Kier embellishing the insistent Funk rhythm added to a killer hook.

The bonus remix CD that accompanies the original album is mainly for completists, with some of the takes being not too dissimilar to the original recordings. Still it is nice to have them. The better mixes are where the original falls away a little and is broken down to its constituent parts: the short Jelly Beats Jam mix of Groove…. expertly sifts out instruments, samples and vocals and re-jigs them madly, I could have stood to have heard more of that. On the Ouijee Extended mix of ESP doomy bells and Hip Hop percussion are grafted onto what was already a fine track and skews it in a different direction altogether. Among these re-imaginings this disc also has the rare and quite brilliant b-side to the Good Thing single Riding On Through. Electronic sounding with shades of Yazzo and Devo plus what sounds like a bog paper and comb solo!

Of course one problem with being “state of the art” and the “height of fashion” is that they are very difficult, if not impossible positions to maintain. So it proved to Deee-Lite, after World Clique they didn’t have really anywhere to go. In the aftermath of that massive hit single and the good showing by this LP in the UK and US charts, they struggled to gain a foothold as time and trends marched relentlessly onwards. They split in the middle of the 1990s after their third album Dewdrops In The Garden with DJ Towa Tei leaving some time beforehand.

World Clique is possibly the perfect time capsule from 1990, when Acid House had become the mainstream and people wanted something a bit more than just techno, techno, techno. Deee-Lite, with their Psychedelic comic strip sassiness and ultra-cool demeanour, provided the dance floor with songs imbued with the influence of Funk, as well as taste and humour. They may be irrevocably stuck in a certain epoch and space, but it is still a pleasure to spend time in their whacked out, day-glo world. A reissue put together with a clear love for the record and a new interview in the accompanying booklet with Lady Miss Kier, we can again enjoy the everlasting “Now” the band promised, in full trippy, living colour.