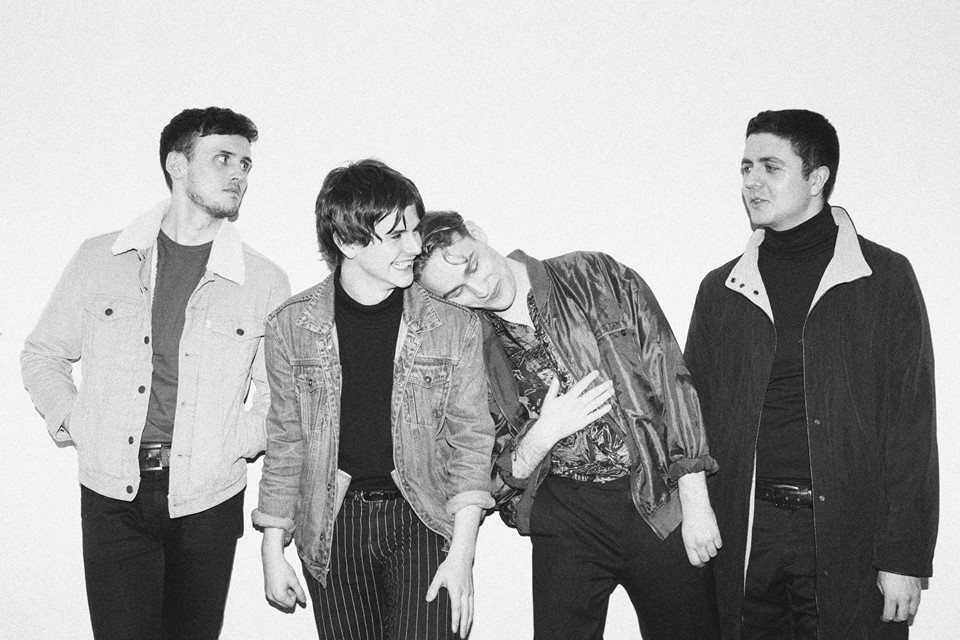 Declan Welsh and his band The Decadent West are firm favourites on the Glasgow live scene. A staunch political activist, Declan Welsh works closely with the charitable organisation Children In Scotland and has also performed at the Labour For Socialism event Concert For Corbyn in Glasgow .

This has been a heady year which has seen him perform in Palestine with an orchestra of child refugees. He is also a poet and has had his spoken word featured in Teatum Jones’ opening show at London Fashion Week. With sell-out concerts in Glasgow at King Tut’s and Stereo for the band, 2017 has certainly been memorable.  With an excellent new single Useless released this week, these are exciting times indeed. Roxy Gillespie caught up with Declan Welsh following the release of the controversial video for the single Nazi Boys, speaking to him about his politics and what drives him musically.

Louder Than War: You are known for you forthright views on modern society. Did any of your own experiences shape the way you feel?

I think growing up in a pretty normal place, suburban South Lanarkshire, it shows you the effect that the destruction of community has on people. My parents definitely played a huge role in my politics. Empathy was always very important. But neither of them were incredibly political, I think it’s more their example as people. Them and their parents grew up with communities in working class areas, I think that lineage, to know the hard work and struggles that generations went through to provide their kids with a decent shot, it means you know how easy it is to be the one struggling, you know? Maybe it’s that, but I also think studying Law helped shape the nuances of my politics. To view everything critically, to understand the bigger picture, that’s the skill it teaches you. Just because something sounds like it makes sense, it doesn’t always mean it does. And everyone has their own biases, and they will communicate them in ways even they might not be aware of.

What do you feel is the best way for people to become less complacent about what is going on around them?

I don’t necessarily think people are complacent. I think perhaps they feel powerless. Which is very deliberate. This system controls us not through force, but through giving us loads of freedom in controlled environment. You can say whatever you want, but you have no right to food or a home. The fact we appear to be free disguises the fact that the majority of us have a fate predestined by factors that were indebted to us before we were born. That’s terrifying. I think the solution to that is to ignore the current systems and create our own. I will not pretend for a second I have the answers, that’s the journey I’m on. I think that reading is the best thing to do, though. Listen to people who have the time to think about all this, see what rings true. Then, go and connect with people. Go out, see how immigrants resist detention centres, see how communities combat austerity, see how places like Govanhill Baths in Glasgow combat racism by fostering a community spirit. It’s that combination of education and activism that is the key to resistance and revolution.

What do you think the worst thing is that is happening now?

The rise of the far right has got to take precedent at home, but really it is the centre and right’s continuous pandering that has given rise to this. If you patronise communities that are fed lies about immigrants by saying “oh well that lot don’t like immigrants so we’ve gotta do something”, it’s absolutely fucking insulting. If people are wrong about a problem, which they are about immigration, then you have a responsibility as a public servant to provide them with a compelling argument, a vision, and fucking research and analysis. Immigration does not cause unemployment or falling wages. This system exists to exploit workers, and make as much profit as is possible. So I think at home, it’s both the rise of white nationalism, and the fucking insufferable “surprise” of the middle ground, who has been peddling myths about immigration, Islam, British Colonisation, war and all sorts for years and is now confronted by its own Frankenstein’s monster. It happened in Germany and Italy in the 30s. History is repeating itself again.

Nazi Boys throws down the gauntlet in the fight against fascist bully boys. Have you had a lot of negativity because of it?

Yeah. But not from fascists. I think mostly because they wouldn’t really hear my stuff anyway. But there’s a lot of people on the centre and left who are uncomfortable with aggression as a means to confront violent ideologies. I am anti-war. War is the poor fighting the poor for the rich, and the poor are the casualties. But if you ask me do I think the fight against Franco was wrong? Do I think antifascists in the USA confronting KKK members is wrong? Do I think that violent resistance by oppressed groups against totalitarian regimes is wrong? I could only answer that by stating my own ignorance. I have never been an oppressed group. For us to judge their actions, to claim moral superiority, is ridiculous. Violence should be avoided at every cost, and the innocent should never be brought into it. But if you have an armed right wing militia chanting anti-Semitic slurs and advocating genocide, are you telling me they should be brought to the debate? Come on. There comes a point when a certain ideology is so toxic, so baseless, and so dangerous that it has to be met with resistance.

So I think that white, straight liberals condemning antifascist resistance is a comfortable way to relieve yourself of the responsibility that you have to stand in solidarity with the oppressed. Reformers of history are great when everything is going well. But crises like our current one show it to be a weak tactic. Socialism or barbarism, as they say.

Do you have any heroes?

Musically, I love Kate Tempest, Courtney Barnett, Billy Bragg. But it’s my mum, if I’m being honest. She’s a fucking superwoman, taught me everything I know.

Do you think there are any honest politicians? Can they lead us towards a fairer future?

I think the problem is that political parties exist to get elected. Corbyn’s rise is promising, Caroline Lucas is great, there’s some principled SNP politicians, but fundamentally (Greens aside), parties have to constantly concede principled points in line with public opinion. Fuck trying to focus group policies. It’s insulting. You are paid to think about how best to run the country. We are not. Our time is taken up by doing other things. So you think about it, and you come to us with good ideas and put them across. Stand for something.

Fundamentally, though, this system is fucked. We need to put people before profit. And we need to work in tandem with our world, not plunder it for resources with no consideration for the future. We need politicians much less than we need movements. No cult of personality, no electing the change. We will do it from the ground up.

Do you think having a fairly political profile will hinder or help your career in music?

God knows. It is maybe gonna make some people sigh, and might put people off. But equally other people will like it. I don’t think you can think about what other people want from you too much. I write the songs I want to write. If folk like them, great. But I write them for me.

Glasgow produces so much talent. Is it an exciting time to be part of the music scene in the city?

It is. I love the place. The amount of exciting bands is quality. I think what’s cool is there’s a lot of women leading the way. Guitar music is really male driven, still. I am part of that problem, but The Van Ts, Lucia, Emme Woods, Misc. Meat (to name but a few in a long list) are shining lights. They’re all so talented, so in that respect gender isn’t a factor. But as someone who likes lyrics, different perspectives are always interesting. It gets boring hearing daft boys sing about how they wish the girl they fancy would realise what a very nice guy they were. The sooner the boys club is dead, the better. Fuck all male bills as well while we’re at it. Though again, I am part of this problem.

Your music seems to be a way for you to express the truth of situations as you see them. Is that true, and how important is that to you if it is?

Yeah, I think that’s what it’s all about. How else could you possibly create any art if you didn’t want to express something? And what else are you going to express other than how you see the world? It seems pretty self-evident to me.

Things can seem pretty bleak at the moment. How do you see your own future?

I’m always hopeful. I think that the silver lining right now is that we can’t ignore that there is a serious problem. We have to face up to it. It’s a wakeup call. One which carries with it so much danger that it is scary. It really is. But what else are we gonna do other than keep trying to make things better and fight? On a personal level, god knows. I hope to get the music out further, keep writing, let people hear us develop. Trying to be a better person, read more, understand the world better, all that stuff is a goal too. But those kind of resolutions are for January 1st, now, aren’t they?

Declan Welsh and The Decadent West release their new single Useless on 17.11.2017. Listen to it on Soundcloud.