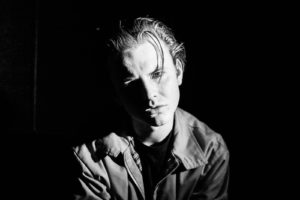 Another of Glasgow’s finest up-and-coming acts Declan Welsh and The Decadent West has chosen to premiere the new video for hard-hitting track Mirrors on Louder Than War.

Known for his strong political stance and willingness to fight against the intolerance so prevalent in modern society, Declan Welsh performed in Palestine, T In The Park and London Fashion Week last year – quite an eclectic mix by anyone’s standards.

Also a poet, Declan Welsh has this to say about Mirrors, which was recently released as a double A –side single with the track No Pasaran: “Our view of the world is increasingly skewed by outside forces, by what information we consume and what bubbles we exist in. Mirrors is a reflection of this, a snapshot of paranoia and disassociation. It is the suicide note of a man driven mad by watching the world burn, and not knowing who lit the fire, or why.”

The video gives us a few candidates for global arson. The usual suspects line up, flashed at us from the screen – Trump, May and the whole shebang. The guitars are strong and moody, the vocals tortured in keeping with the mood and the images of fractured modern life. The moodiness extends to the vocals which are alternately soft, with an almost ’80s feel, and shouted; anguish filled and out of control. The flashing images of politicians, war and 1st world societies slot in with the ‘hall of mirrors’ shots giving the video a suitable feel of distrust, fear and confusion.

Declan Walsh is currently working with Johnny Madden of Baby Strange, who is producing Declan’s next two singles. He is performing a headline gig at King Tut’s on July 14. He is on the line-up at both Kendal Calling and Electric Fields.