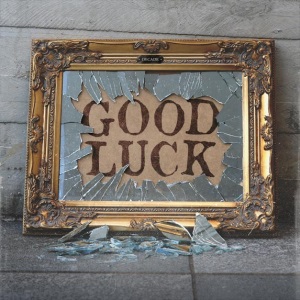 Cracking debut album from Decade – Bath-based five-piece, many years in the making.

As the relentless march to the grave picks up pace, it’s very easy to fall into a trough of lazy cynicism and critical torpitude that only a bloody good new band can kick you out of. It is, therefore, unfettered gratitude and an unforeseen smile that greets Decade’s debut album because, you see, they’re new (sort of) and they’re bloody good.

It’s taken a good five years to get to debut album stage, but by about three tracks into Good Luck it’s pretty clear this band have class. It’s equally clear from where that class stems – this is a quintet of musicians who have somehow found themselves in remarkable tandem with each other and as a result the pieces of the album fit together like a jigsaw puzzle. This is no exaggeration: guitars, vocals, bass, all complement each other in just a way as to induce grinning. And to complete the set Dan Clarke somehow seems to know exactly the right moment to whack a drum to glue the whole lot together – unlike a jigsaw puzzle, which you’d ruin with glue obviously, don’t do that.

The standout songs, in a fine set with few weak links, are the three singles nestled nicely up against each other at two, three and four. Brainfreeze, Callous and British Weather form one of the finest trios of songs you’ll hear together for many a moon. Callous in particular – a riff like that at the start of any song is quite enough to bring welcome warmth to a grumpy old git’s chilly heart. The only tune that doesn’t quite work is Homebound, but even that would be worthy of inclusion on countless albums that get good write-ups in a genre stuffed with mediocrity.

Knowing when to shut up is an underrated art and Decade don’t leave us in much doubt as to whether they’ve mastered it. The standard album is just 26 minutes long for its ten tracks, although two live numbers have been added to the deluxe addition. This usually signifies a band running out of ideas and tossing off a couple more tracks they happened to find on the recording of a gig somewhere, but in this case both Thursday and Who Knew sound much like studio recordings. That’s handy in Thursday’s case, as it’s a fine song that would have deserved more than an afterthought.

Some bands whack all their ideas onto their first album and burn out fast, drizzling out a sophomore LP a couple of years later to no fanfare and fewer sales. It’s possible, I suppose, that this will happen to Decade, but with a team of musicians so swiftly at the top of their game, and in such sync, it’d be a devastating shame. Good Luck isn’t exactly innovative but that’s of little concern – in playing to their strengths Decade have formed an heroic debut. Here lies the body of a play on words about their name and how long they’re more likely to last.