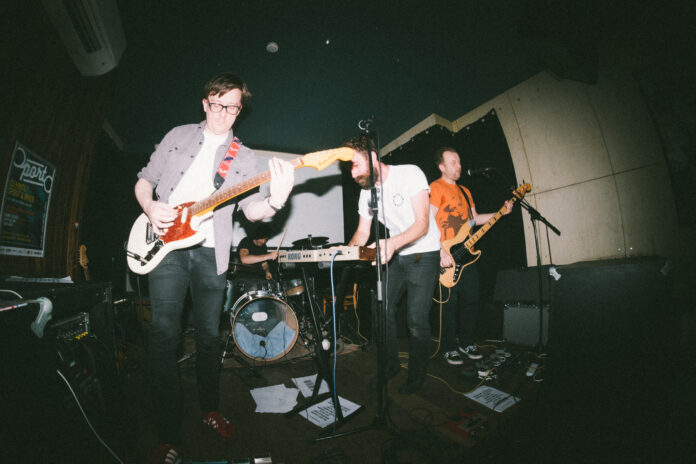 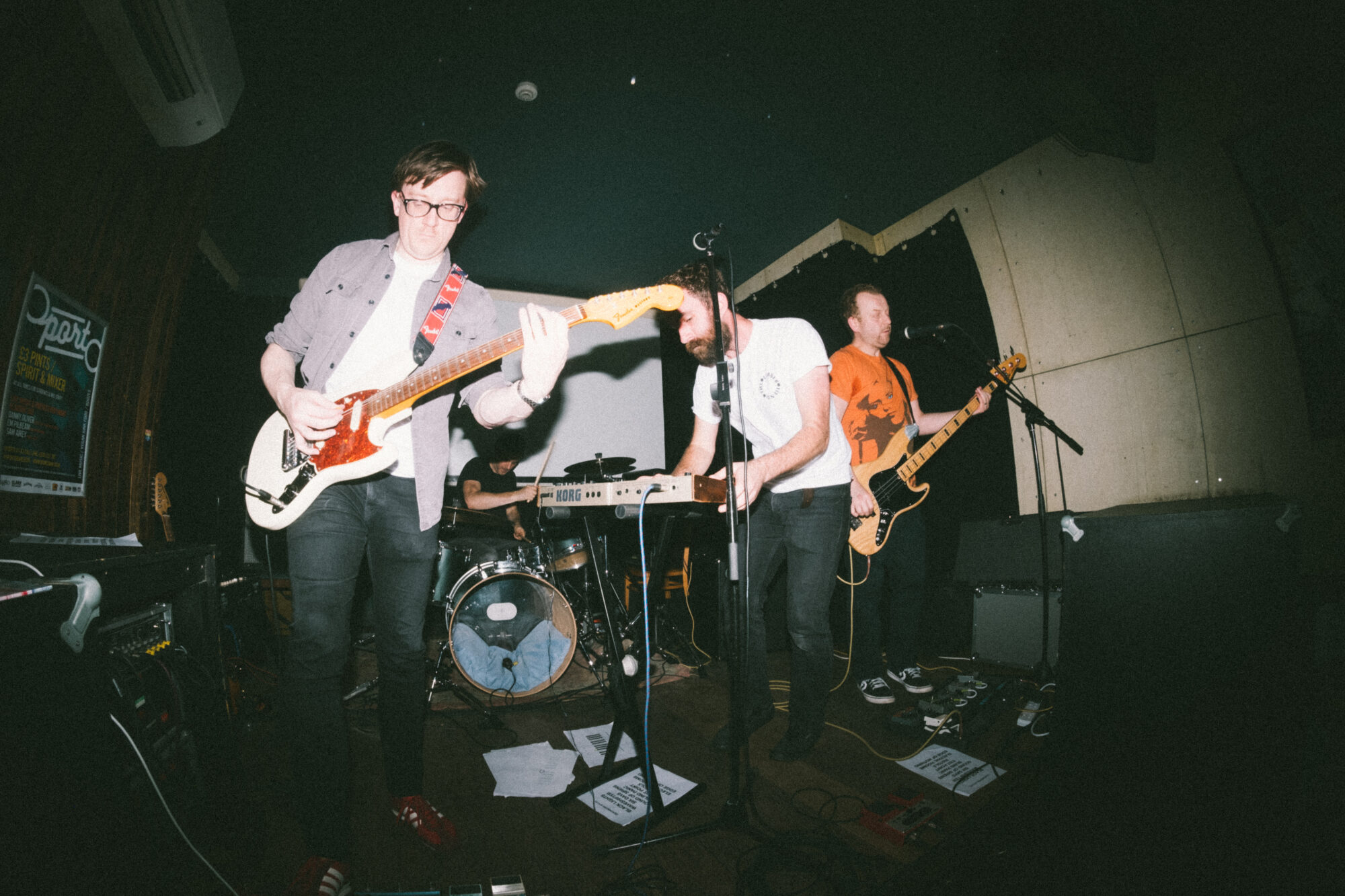 Andy Brown heads to Oporto in Leeds to watch Deathretro celebrate the release of their long-awaited debut album. He shares his thoughts for Louder Than War.

There’s been something particularly cathartic about going to gigs recently; the memories of lockdown, endless cancellations and re-scheduled performances still feel fresh. Imagine, if you will, how Deathretro must feel. The Manchester-based electro-punks have had their debut album in the pipeline for about 10 years and have finally reformed to unleash their beloved creation upon an unsuspecting public. To say they’re ready to hit the stage is something of an understatement. 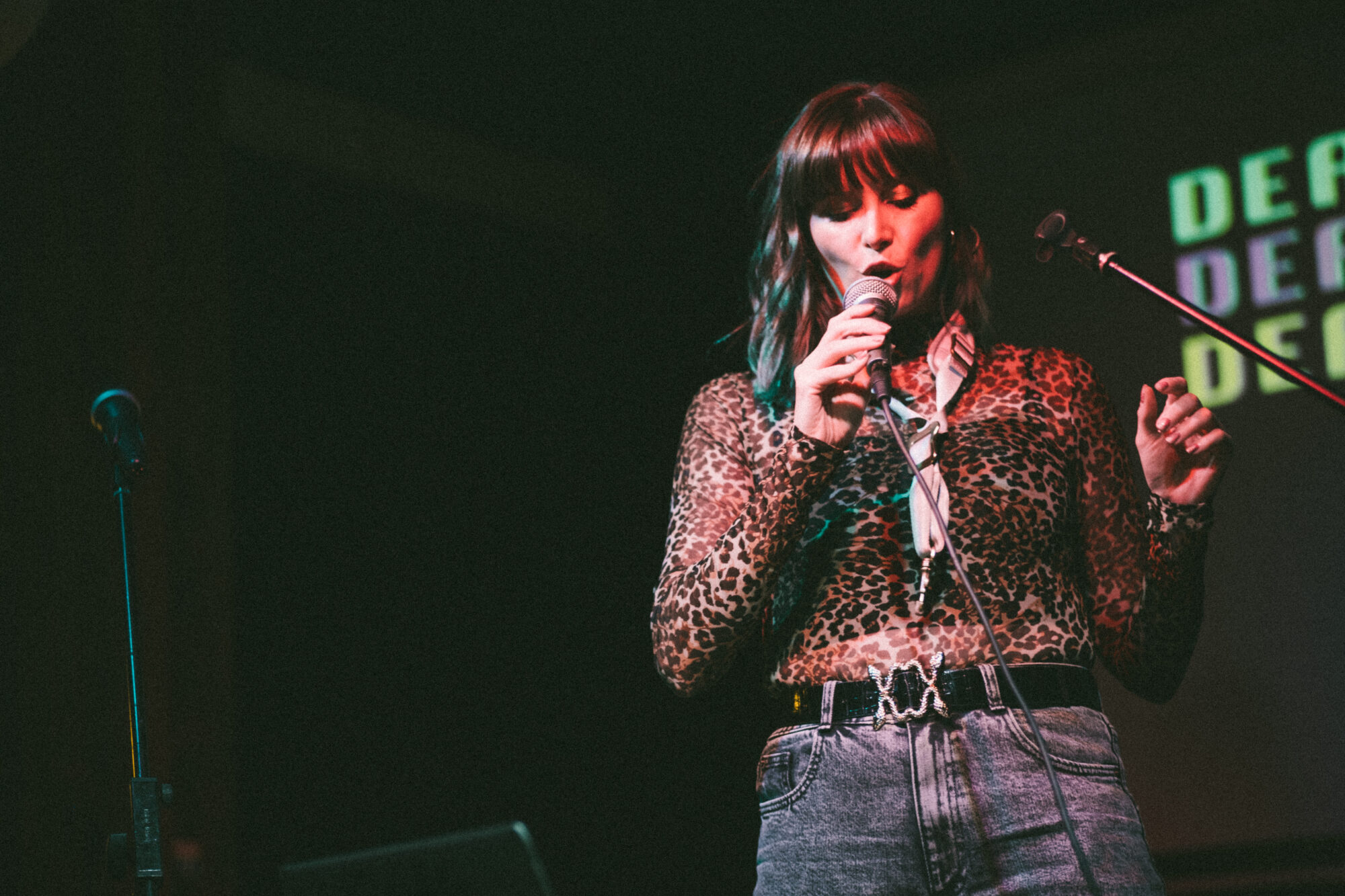 Tonight’s first set comes from Leeds’ very own alt-pop innovator, Elara. Standing in front of a laptop with a flute and a saxophone draped around her neck, Elara starts the party with a hip-swivelling, technicolour blast of electro-pop. Using loops, beats, smooth vocals and disco sensibilities, the multi-instrumentalist creates catchy, dancefloor-ready tunes. One track dabbles in drum ‘n’ bass while tunes like Dead Of Night prove to be irresistible, alt-pop earworms. Top this all off with a thoroughly joyous, saxophone heavy cover of Sweet Dreams (Are Made Of This) and you’re onto a winner. An immensely fun set.

The next set comes from West Yorkshire’s finest, The Wind-up Birds. The band first caught my attention way back in 2010; eternal underdogs and quite possibly the best band you’ve never heard. “Alright, alright” drawls frontman Kroyd as the band rip into long-lost b-side The Night Soil, “I’ll get to the point in a minute”. The four-piece sound energised as they dive into a set of raw, passionately delivered post-punk. “This is off our last album” begins Kroyd before the anxiously anthemic Ignore The Summer, “which you haven’t heard but you should. It’s good”. 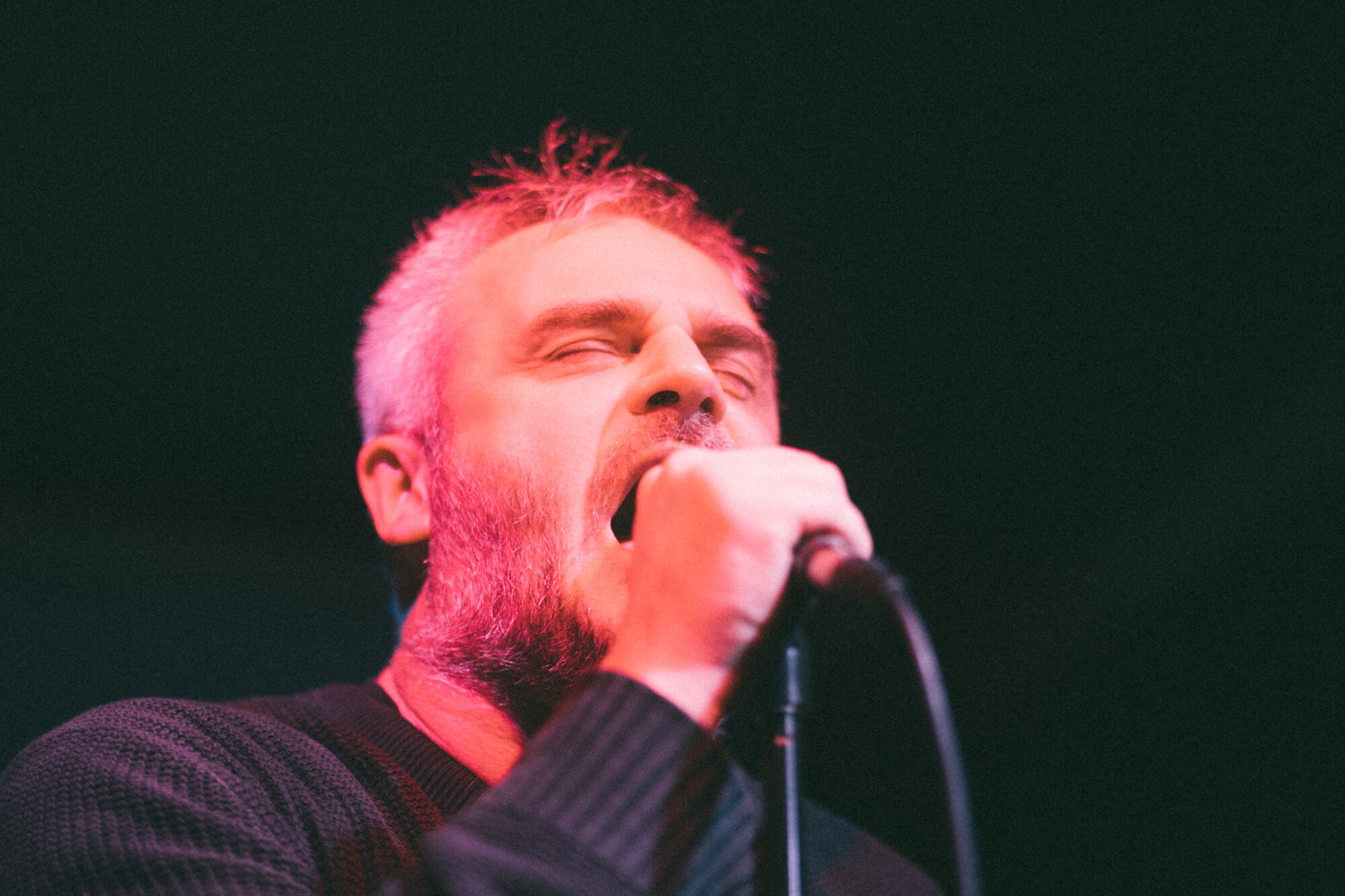 Tracks from the excellent Summer Haunts mingle with cuts from the band’s impressive back catalogue. Teeth is a fierce and razor-sharp anti-anthem, while the life and death drama of Two Ambulance Day still provides a potent, emotional gut punch. Kroyd’s dark, funny and whip-smart lyrics are bolstered by the band’s heart-racing harmonies and riotous tunes. The seething Where We Built Our Settlements lumbers through the Brexit wasteland, while the chorus on Straight Forward Skies damn near lifts the roof off. If you’re not familiar with The Wind-up Birds then you really need to give them a listen.

Deathretro have been hunkered down in the electro-punk bunker for the last 10 years, yet with a long-overdue debut album stashed under their arms they’re finally ready to hit the stage. They aren’t about to take any prisoners either as they open with the thunderous Black Lights; the band sound thoroughly vicious from the start. Waveshifter captures the outfit’s explosive energy, with vocalist Kieran Harris leaping into the crowd like a tightly-coiled spring at the moment of release. How they’ve managed to keep this kind of irrepressible energy under wraps for so long is anyone’s guess. 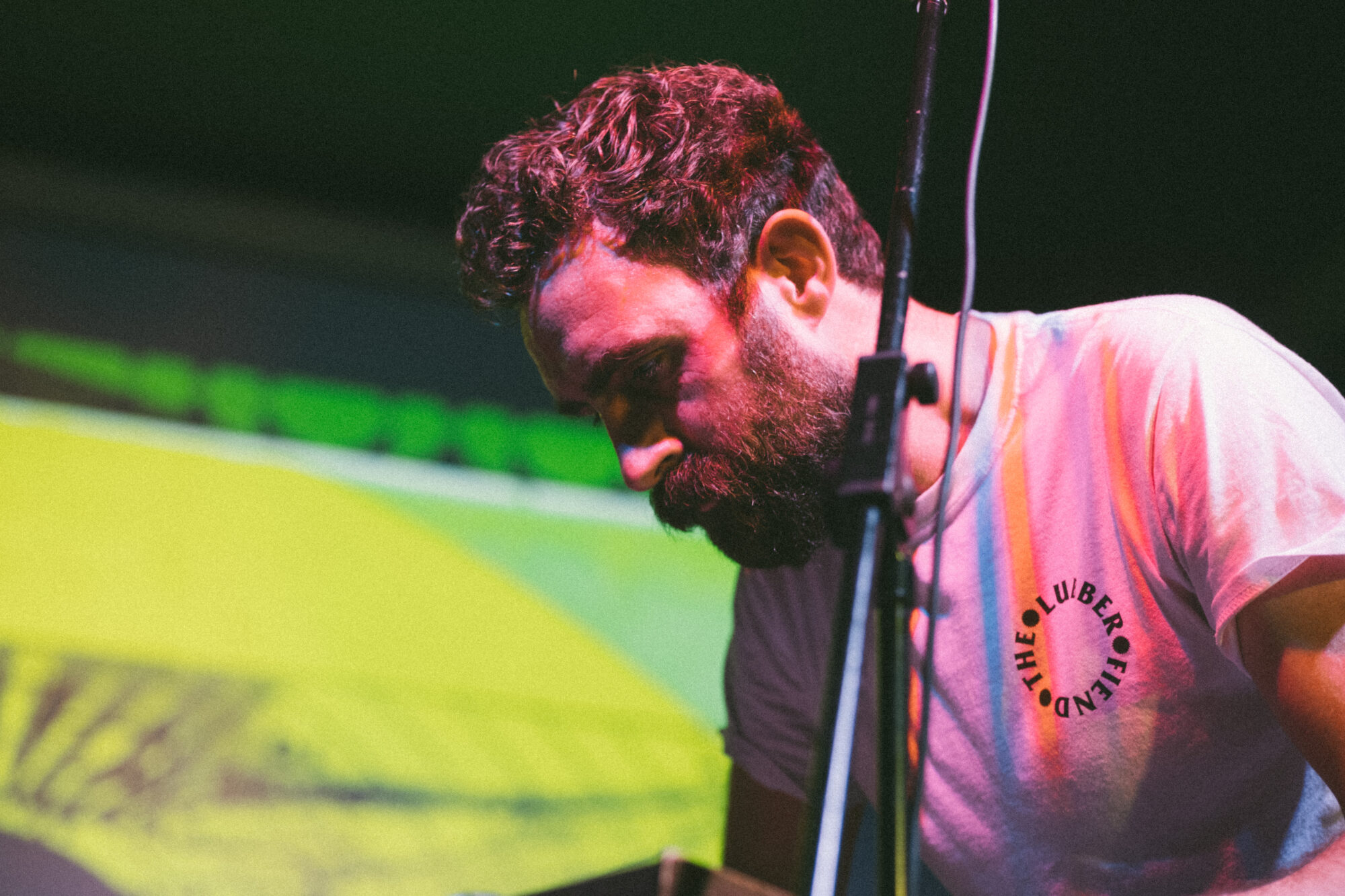 The intimate backroom at Oporto bursts into life as the band plough through a set of alt-rock riffs, synth-punk stylings and danceable dread. Blind Panic rides along on a head-nodding groove while the huge Sound Of Sirens pummels the grateful crowd. Guitarist Adrian Ingham serves up a relentlessly creative and satisfyingly heavy smorgasbord of riffs while the rhythm section adds further sonic heft. Meanwhile, Harris jogs on the spot, screams and dives to his knees as he loses himself in every explosively sweaty second.

Bonfire night may be tomorrow but no one told Deathretro. Electric Rooms hits like a molasses-thick, wall-of-sound while the raw, live incarnation of Pistols sounds like Gang Of Four in a particularly belligerent mood. The brand new Exit Point even gives us a glimpse into what the band are preparing for their second LP. Suffice to say, Deathretro aren’t planning on sleeping anytime soon. At one point Harris reminisces about first seeing The Wind-up Birds some 20 odd years ago at an all-dayer at The Primrose. The two bands would go on to play together on numerous occasions. For those who were there, tonight’s reunion has been a long time coming. Rumours of Deathretro’s demise, as the saying goes, have been greatly exaggerated.