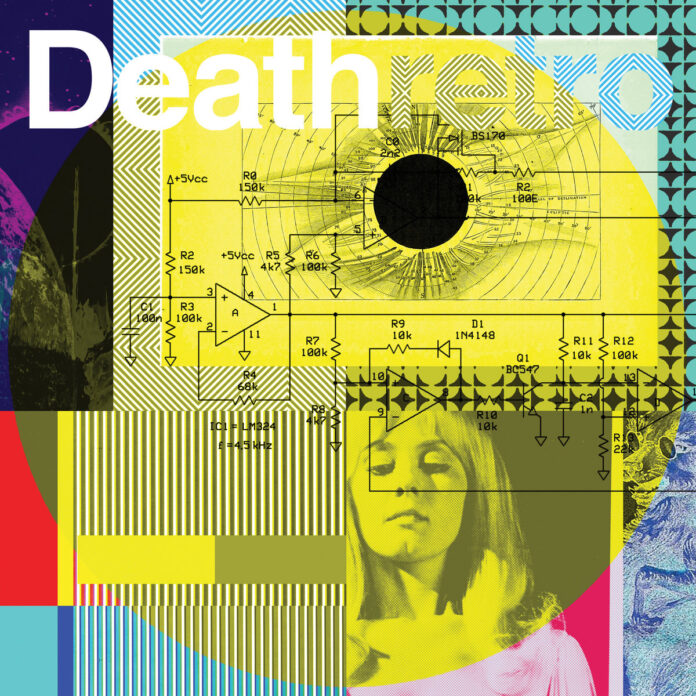 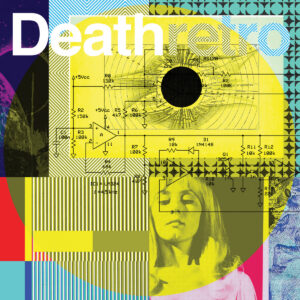 A flurry of shimmering synths is quickly followed by a muscular riff and a rhythm section that feels intent on ploughing through anything and everything in its path. Black Lights is one hell of an album opener, yet the self-titled debut LP by Deathretro is a record we almost never got to hear. Our journey begins sometime around 2010 with a close-knit group of friends out in the rural heartlands of Cumbria. A band of music obsessives with a shared passion for heavy riffs and danceable rhythms. Delays and deliberation would keep the band’s long-planned debut album on the back-burner for a decade. Trapped in amber like the mosquito in Jurassic Park, Deathretro have finally re-emerged as a fully grown T-Rex. Jaws drooling and ready to rock.

Great rock ‘n’ roll is often defined by those barely describable and breathlessly thrilling moments. It’s that part in a song where you involuntarily reach into the sky with a clenched fist and have an almost overwhelming urge to get up and dance – raising the eyebrows of concerned commuters on the bus as you nod along with ever-increasing enthusiasm. In its meagre two and a half minute runtime, Waveshifter pulls this trick off with aplomb. It’s a rule-bending, heart-pumping slice of manic post-punk and quite possibly one of the most exciting things I’ve heard all year. “I drink in all the bars/ that I know you hate/ and I don’t like what I’ve found” sings vocalist Kieran Harris as the rug is abruptly pulled from under our feet and the song erupts.

After the last 18 or so months, the band’s mix of electronic influences, post-punk swagger and heavy alternative rock feels like a much-needed kick up the backside. Edge Of Nothing captures the albums irrepressible sense of urgency; the lyrics and music dancing on a knife-edge. Guitarist Adrian Ingham serves up a tense, jittery riff as bassist Ben ‘Boone’ Robinson and drummer Phil Littlefair lock into a heavy and persuasive groove. Add washes of mind-bending synths and you’re onto a winner. As Harris suggests in the midst of the sonic assault, this could be the start of something. The somersaulting riffs, hard-hitting drums and wild unpredictability on Six Days keep pulses suitably high.

Two-part instrumental Cycles sits at the centre of the LP and flexes the band’s electronic muscle. A suitably pulsating, electronic banger full of dance-inducing synths and some frenzied, semi-improvised guitar; the two parts are over fairly quickly but I like to think there’s an edit out there where they play for an hour straight. Bliss.

Electric Rooms highlights just how well the album is produced: a glistening wall of post-rock guitars that fill my headphones with the band’s epic, spine-tingling noise. A dark and brooding sonic colossus populated by lost souls and twisted love. While their music may inspire a trip to the indie-rock dance floor, there’s something far darker going on under the surface.

After driving us around the dimly lit woods for a while, Sound Of Sirens finds the band dropping us off in the heaving chaos of the city centre. A blistering and nightmarish tale of squealing sirens and blood that trickles underfoot. The bass and drums keep the track distinctly danceable while the guitars sound utterly fierce. The brief Blind Panic keeps us in the sick-stained pandemonium of a Saturday night with a track that sits somewhere between post-punk and early Beck. “It doesn’t matter if you win this game” intones our well-seasoned guide. The incendiary Pistols drags us back for one final woodland rave with the bands bludgeoning dance-punk hitting the forest-dwelling revellers at full-tilt.

For all its time kept on ice, the album has lost none of its wild-eyed urgency. An LP without an inch of flab, there isn’t a second here that doesn’t crackle with electricity. Every second is stuffed-to-the-gills with riffs, synths and swagger. A genuinely exhilarating experience: Deathretro have delivered an album that goes for the jugular with an impressive and persistent ferocity.