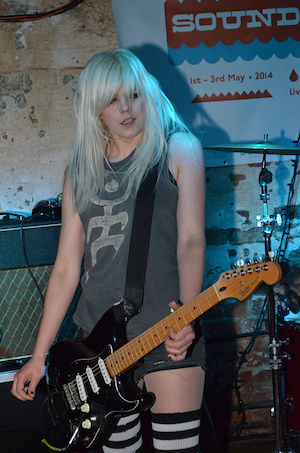 This gig was just one of the hundreds taking place all across Liverpool under the banner of the cities ‘Sound City’ Festival, the festival is now in its 7th year and draws performers and fans from across Europe – there are apparently in excess of 350 artists appearing over the 3-day event; the difficulty, certainly for those of us wanting to see a band is trying to select a band from such a huge offering.

Local music magazine Bido Lito! Goes into overdrive for the duration of the festival and produces a daily newspaper complete with the past days gig reviews, listings and suggestions, amongst its pink pages, pink the colour and not a lifestyle statement I saw a footnote regarding a band I had never come across before; Deathcrush – apparently from Norway and offering a mix of no-wave and death metal…well that was my decision made!

The subterranean location of The Shipping Forecast’s live area simply begs for dark intensity, and Deathcrush supply by the armful; a sometimes savage thrashy noise that collides with, well almost pop tunes, the pop aspect being accentuated by the dual female lead vocal delivery, however this impossibly young trio clearly know their musical history as they draw upon elements of No-Wave and deliver the entire adrenalin fuelled rage with a charismatic swagger.

Linn Nystadnes and Ase Røyset face each other, though at right angles to the audience; Linn is impossibly pretty – pure Nordic, long bleached hair, cropped shorts matched with a battered Neubauten T-Shirt draped across her slender frame; Ase is a mass of hair and involuntary smiles as she careers around the stage, Linn making regular forays into the shell-shocked crowd, the vocals screeched into the microphones in an apparent half-arsed über-cool fashion; their music, like them is never static – its dark, sinews twisting reaching out into the shadowed venue, and those partially submerged pop melodies offering succour; at one point Vidar Evensen’ drum kit succumbs to the relentless punishment, cymbals fall to the floor – none of the band care the sonic space is suddenly filled with squalls of distorted guitar wails…then one of Linn’s effects pedals jams – she crouches down and repeatedly punches it until it reactivates; her joy evident as she pinballs the stage…at times she abandons the guitar entirely, choosing to cavort the stage as she delivers another vocal onslaught all the while peacocking herself in poses more likely to be witnessed at a Girls Aloud event

Deathcrush create an almighty racket, a powerhouse of grinding, almost sludge like noise – what’s quicker than sludge, because that’s where Deathcrush operate, their sound is intense, enveloping you in the chaos, almost claustrophobic but always pinpointing release via an innate pop sensibility – the set is short, perhaps 25 minutes and concludes as Linn hurls her guitar to the floor feedback filling the void…a slow ripple of applause begins and then as people begin to assimilate what has been witnessed the praise builds expeditiously; none of that matters to Deathcrush who by now are already making their way to the bar.

Deathcrush have a couple of UK dates remaining on this short headlining tour, before heading out across the UK in support of White Denim – Go see ’em.