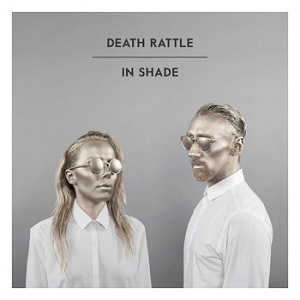 London’s Death Rattle have an interesting sound which borders on many styles and finally rests on one that they seem to have made their own. A brand of dark, alternative pop with catchy choruses and unusual soundscapes often littered with impressive percussion breaks and guitar gnarls.

Opening with Shade, this is maybe what Savages would sound like if they had opted for synthesizers instead of guitars. A lone bass line begins with Helen Hamilton’s accomplished vocals give an infectious start with a gentle drum sound. The track builds and progresses into an impressive start to the album and closing screeching feedback only adds to the drama.

Situate begins with a Led Zeppelin like riff before being overplayed by a simple electronic melody. The hard riff continues to make appearances and again the vocals are clear and powerful. The duo is completed by another Hamilton – Chris (presumably related) – who provides some chilling instrumentation.

Recent single Weak Joints has another throbbing bass and has some great synth effects and sounds. Complimented by more rolling drum sounds and a chant which is hard to forget, it is very easy to see the duo attracting wider appeal. Think along the lines of a less commercial Lorde and look at the success she has achieved.

After the opening three tracks, the album takes a less harsh approach and maybe becomes slightly poppy. It’s not a bad thing but the sound is far more common and the edge is taken away from Death Rattle. For instance, another recent single Wait lacks punch and to be frank is just an ordinary tune. Sure, the clinical gravel sound is still there but it’s tame and not as brave as its predecessors.

The less adventurous approach is also repeated for Shell and Safe Waters and had it not been for the intriguing start to the album, it could well have faded into obscurity. Only on Take Down and Exhale does the original inventiveness come back the fore, and dark brooding pop is the order of the day again. Exhale in particular broods between catchy pop and an apocalyptical combination, and another impressive guitar lick adds power and menace.

Album closer, Fortress inspires a bleak soundscape as a tale of Stockholm Syndrome unfolds. It’s dark, it’s gloomy and it’s rather wonderful as its dramatic sound unfolds and menacingly rises to a tumultuous finale. Death Rattle hold promise and lots of it. There’s potentially something very special about them and could be signs of big things to come.