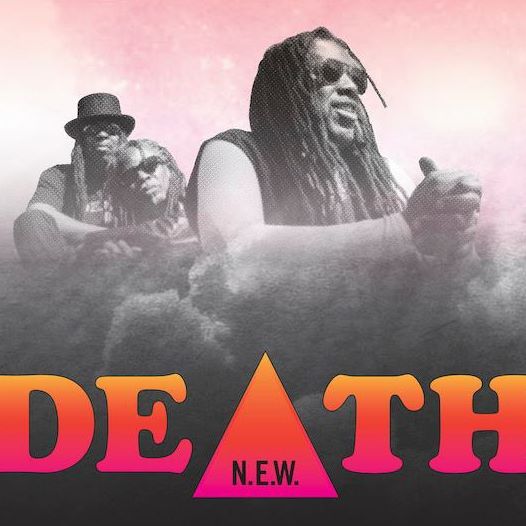 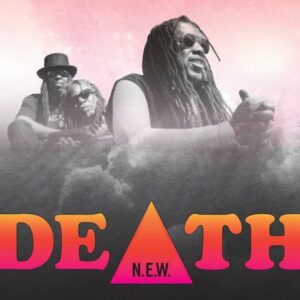 The incredible Death have been resurrected by Drag City, they’ve finally answered the critics with the release of N.E.W. It’s a primitive slab of fantastic rock music!

Some of you will know the story of Death, but I’ll summarise it here for you. Originally formed in 1971 by the three Hackney brothers, originally began as a Funk trio but switched having seen The Who and Alice Cooper. With a name like Death no one was willing to give them a record deal without changing their name, so despite potentially being one of the first punk bands in the world their music was rarely heard.

Since they disbanded in 1977, following different musical paths before being resurrected by Drag City in 2009 in which they released their early demos. Since then they’ve begun playing live again, with new guitarist Bobbie Duncan taking the place of David Hackney who sadly passed away in 2000. With this came the question would there ever be another Death record, the answer to which is yes, and to say it’s incredible is something of an understatement.

The powerful riffs of opening track Relief, hit you like a bolt out of the blue as you press play. There’s a raw quality to this opening track, the lyrics are simple yet effective it’s a primitive beast of an opener. Fortunately the album continues in a very similar vein, raw rock driven by intricate riffs and almost spoken word style vocals.

Yet in parts the pace an exhilaration of the album are brought down a notch though, Story Of The World is opened up in a softer style yet reverts quickly to the manic behaviour seen elsewhere. This track also has a real message about the current state in which we live in, as the lyrics point out “the world is in the hands of fools.” There are many other poignant statements to but this is the most resonant, that shines out in this track.

There are a lot of fun elements to the tracks though as demonstrated in Playtime, where we’re all encouraged to live in the moment. Whilst the music is frantic and fun, there is a real fun and quite danceable element to parts of the record. It’s difficult though to pin it to one genre as with many records now, Death flick between a multitude of styles.

The simplicity of the songs really does help their accessibility; it would be quite feasible for Who Am I to easily become an alternative festival anthem this year. For more reasons than its insanely catchy lyrics, every track has a great hook in the lyrics though that makes them so instant. Yet Who Am I will be that track that after listening to the album will stick firmly in your mind for days after.

As the album closes out the track Resurrection, feels like the track that should of opened the album. As it could be likened to the resurrection of the band after so many years, it also hints at how they’re having fun and how it has only just begun. On the strength of every single track on this album I can only hope that this is just the beginning.

The final track though goes at odds with Resurrection, Change talks of how everything has to change and rightly so. That said though, Death have really found an incredible formula here, it’s powerful, accessible and exciting. Overall it’s a fabulous album, whilst it may be simple in its style it is executed perfectly and brilliantly and all I can say to close is long live Death!

Death can be found online here deathfromdetroit.com. They’re also on Facebook and tweets as @TheDEATHBand.