Despite cinematic classics such as Belle de Jour, The Discreet Charm of the Bourgeoisie and That Obscure Object of Desire, Luis Buñuel will perhaps always be best remembered for the silent short he created along with his childhood friend Salvador Dali, Un Chien Andalou. David Bowie used it in lieu of a support act on his 1976 Isolar tour and Pixies sang about the film in Debaser. It was screened on BBC 4 recently, and I still can’t watch the infamous slicing up eyeballs shot.

Death in the Garden dates from the period between Un Chien Andalou and his later more critically acclaimed period. It was never widely screened outside of Mexico, where it was shot, and France (it being a co-production between both countries).

The film begins with local soldiers demanding that a group of diamond prospectors immediately surrender their land and claims in a South American mining outpost to the authoritarian government.

Chaos ensues with shootings and riots and, through a variety of circumstances, a group of five characters are forced to flee through the jungle to the safety of nearby Brazil.

This mismatched group are led by Chark (Georges Marchal), a stranger in town with shades of future Spaghetti Western heroes that Clint Eastwood would specialise in; Djin, an opportunistic tart with a cold heart (Simone Signoret), Father Lizardi (Michel Piccoli), a missionary who is as naive as he is self-righteous along with Castin, an aging diamond miner (Charles Vanel), and Maria, his deaf-mute daughter (Michèle Girardon).

Based on the novel by Jose-Andre Lacour, Death in the Garden’s plus points include a very entertaining and never predictable plot. It has solid performances and some very impressive cinematography – shot in Eastmancolor, the colours in Death in the Garden look fantastically vivid. The soundscape is equally good, particularly in the long section of movie set in the rainforest.

Buñuel fans, though, might be slightly disappointed by the lack of the director’s signature flourishes. It’s not till the seventy five minute mark that he employs one of these – an army of ants dining on a snake as the fugitives, on the verge of starvation and intending to devour it themselves, attempt to light a fire to cook it.

Death in the Garden is by the standards of the director one of his most accessible films. It has with two distinct halves. The first, set in the town, is clearly political – anti-authority and anti-clerical, the second half is really an adventure yarn, albeit a particularly gripping adventure yarn.

As a whole, the film is definitely recommended even if it doesn’t reach the artistic heights of some of those classics I mentioned earlier. Very few films, though, can compete with those.

Extras include optional English subtitles, interviews, trailer and a booklet featuring a new essay by Philip Kemp, along with archival imagery. 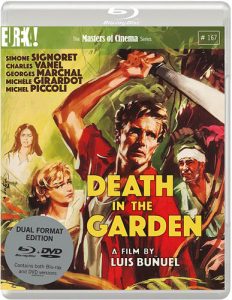 The Masters of Cinema Series presents the Death in the Garden for the first time ever on Blu-ray in a new Dual Format edition. You can find out more information and see the trailer here.