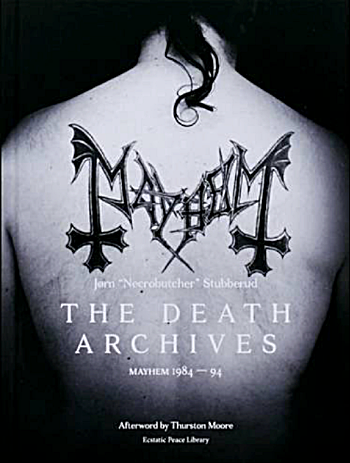 First time in paperback for the illustrated first person account of the origins of Norwegian Black Metal told by bass player and founding member of Mayhem, Jørn ‘Necrobutcher’ Stubberud.

“I should just write a book myself and tell how it really was, to end all of this speculation and bullshit” has been  Stubberud’s response to all the previous attempts to tell the tale – what he bluntly refers to as “all fucked up with the wrong things.”  The old maxim of ‘If you want a job doing, do it yourself’ coming into play.

There’s no doubting the fact that Norwegian black metal is both a unique and niche subculture – at times extreme yet some would argue the melodic nature of the genre. So from the horse’s mouth comes a collection of photos, memorabilia and recollections of moments all shared in 250 pages.  The NME has termed it “the wildest story ever told” and yes, there are some parts that might induce a grimace or two as he reveals from first hand, the seedier side of band life.

From impenetrable noise to cultural significance, it’s a no holds barred account of a band proud of their notoriety – something embraced by their fans – and as is often the case, of particular interest as with most bands and artists are the early days from the band’s formation in the early /mid eighties. Included are images of Mayhem’s  early years, from their first photo sessions in full corpse regalia to exclusive video stills of their earliest gigs  alongside rare and unseen photos of the band before the death of singer Pelle ‘Dead’ Ohlin and the murder of guitarist Oystein ‘Euronymous’ Aarseth. Suitably grainy and low res rather than the usual glossy pin sharp images we’re exposed to in the digital age, they fit perfectly with the underground nature of the scene.

The commentary holds a similar allure. Even to some who may never have heard of Mayhem, Stubberud’s narrative is enthralling. A tale of corpse make up and Interrail touring, The Death Archives is an artefact that must be something of a holy grail for long terms fans who will relish the images and words while for those who are less knowledgeable about the Black Metal scene, then nowhere would you find a better or more fascinating  insight.

“The most desperate people hang around railway stations.”

“We were so far along in the planning that we’d already purchased the pigs heads.”

“The day after they arrived I discovered that Jan Axel suddenly developed a habit of eating glass.”

The tome is published by  esteemed art and culture press, Ecstatic Peace Library whose subjects include everything from Norwegian Black Metal to radical underground newspapers and sumptuous photographs of the New York music scenes of the ’60s, ’70s and ’80s.

Necrobutcher will be signing copies of his book at:
Crypt Of The Wizard, 324C Hackney Rd, London E2 7AX
On Monday 29 October at 6pm.