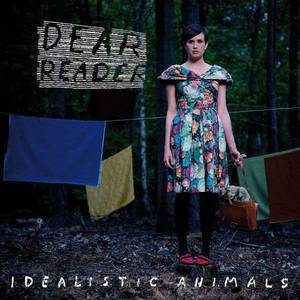 Breakup albums tend to be hackneyed affairs (weak pun semi-intended), largely filled with either overwrought sentiment or half-arsed bitterness. The new record from Dear Reader, aka Johannesburg’s Cherylin MacNeil, is a slightly loftier affair, chronicling her loss of faith in a series of pop ditties named after animals. Pink Floyd this is not.

I’ll confess, I never studied to be a critic, or a journalist, or a writer; it’s a sometime thing I managed to stumble into by a combination of luck and borderline-obsessive geekiness when it came to music. Nevertheless, over the past year or so I’ve managed to pick up on one or two of the rules along the way: for example, any new Morrissey record must mention alienation of fans, anything with a vaguely African sound or origin will be compared to Graceland, and anything out of the European continent must have been influenced by Krautrock… right?

Idealistic Animals, the new record from Dear Reader is, if the lazy tropes are to be believed, a bit of an oddity then. It’s a superficially uplifting record that floats somewhere above twee pop whilst occasionally drifting towards a classic rock sound ”â€œ the guitar line from opener ”ËœFox (Take Your Chances)’ for example, owes a debt to both ”ËœStairway to Heaven’ and, aptly, ”ËœHouse of the Rising Sun’.

As previously mentioned, this is a brave foray into the oft-maligned (oft-rightly) milieu of concept albums. It deals with not only the separation from her homeland and (amicably) Darryl Torr, her collaborator in the band who chose to stay there, but also with a falling out from faith. In a way it’s possibly for the best that such a deep and personal subject is disguised in ditties this light: MacNeil’s voice is more fairy-cake lightness than the kind of anguished BjÃƒÂ¶rk-wail you might expect for such an apparent crisis of the soul as “Mole, do you feel the darkness closing in? / Mole, can you shake the dampness from your skin? / You’ll collide in a tunnel / That connects two burrows”Â.

Fortunately the music often shows enough invention and ambition to dilute the pleasant-but-twee vocals, with flourishes of strings adding a taste of something more Gallic than Brandenburg to the jumpy light percussion of tracks such as ”ËœMonkey (You Can Go Home)’. OK yes, it’s quirky, but those of us who are able to enjoy Yann Tiersen’s Amelie soundtrack without grinding our teeth will find this a pleasant enough listen.

Ultimately Dear Reader may never give us a groundbreaking album of raw unbridled energy, searing instrumentation, or groundbreaking stellar multiverses of sonic experimentation. Nonetheless, Idealistic Animals is both a pleasant and brave album; there may be a slight sense of vagueness to the idea of man and the animals, erm, not being that different after all, and the placing of the song ”ËœMan (Idealistic Animals)’ (Hey, that’s the name of the album!) at the exact centre point of the record feels a touch contrived, but hey it is a nice idea, if slightly uncertain in its execution. Fortunately though there is a line, however fine it may be, between refreshing pop and twee bullshit; Dear Reader just about tread it nicely.