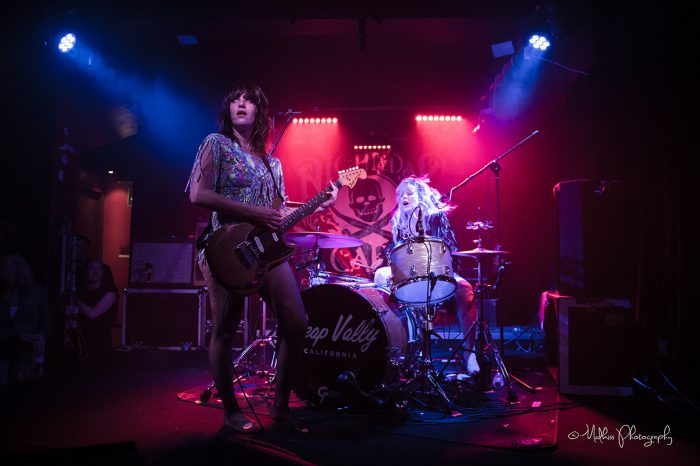 Off the back of blistering album Femejism Californian duo Deap Vally bring their raucous rock to Derby, with support from PINS and Demob Happy. Features editor Sarah Lay reviews.

The guitar slews through the soup of the venue as Lindsay Troy stares out over the Friday night crowd, all hungering for the ravaging and the empowerment of raw rock n roll.

Returning to UK for summer dates including festival slots at Secret Garden Party and Reading and Leeds, Deap Vally are as brutal and vital as ever. Last year’s Femejism, the second album from the Californian duo, built on the success of 2013 debut Sistrionix with more of their scuzzy but raucous rock sound. While on the album their are occasional moments of light with playful harmonies tonight is a full on hard rock onslaught, big riffs grinding through Julie Edwards relentless rhythms.

They headline a brilliant line up tonight, with openers Demob Happy getting things off to the right start. Chunky riffs and hazy vocals give moments of a garage rock Muse sound. They are followed by the ever-brilliant PINS – we’ve said it before and still sadly true – one of the most underrated bands around right now.

Tonight we get recent single Aggrophobe, on record featuring the vocals of Iggy Pop but tonight a re-worked but no-less dark and brooding version without him along with some favourites in Bad Thing, Young Girls and LUVU4LYF. The set shimmers throughout, ’60s pop harmonies mixed with jangling guitars – theirs could so easily become an insubstantial indie sound but they add a synth edge and bring raw power that makes this a wonder rather than a whimsy to behold.

Having already encouraged everyone to dance and, the Riot Grrrl rally of Girls To The Front still needing to be given here, the band invite a sing-a-long as they finish with a cover of The Ramones’ Sheena Is A Punk Rocker.  It passes the baton perfectly to Deap Vally, the energy in the room colliding with the wall of sound unleashed from the stage.

With an impressive stage presence the band don’t hesitate to break out their full sound, it owes as much to the driving rock of Led Zeppelin as it does the desert blues of QOTSA, and the punk of X Ray Spex and feminism of Bikini Kill. In fact the ethos and the sound of Riot Grrrl are prevalent tonight, feminism, space and respect for women in music ever-more vital issues.

It’s with bombast that Deap Vally present tonight, at first a sludgy shock of sound which distills into the awe of detail from across the rock spectrum – a little grunge here, some ’80s infused hard rock there, a creep toward the complexity of math-rock before backing away to the pure raging simplicity of punk.

Derby, a small city with an often inward looking attitude, is fond of excusing its own tendency for apathy by saying nothing ever happens there. Last night added more evidence that view is simply not true. This was blistering rock n roll from some of the best alt bands on the circuit,  a tour-de-force of Riot Grrrl attitude and brooding, bombastic rock.

All words by Sarah Lay. Sarah is features editor of Louder Than War. You can find her on Twitter, her LTW author archive here, and her full music portfolio here.

Images by Melanie Smith from show at Night & Day, Manchester in 2016. More work by Mel on Louder Than War can be found at her author’s archive. You can find her on Facebook and Twitter. Photography portfolio can be found here and Flickr