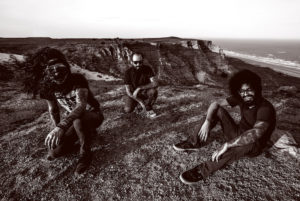 DEAFKIDS announce Metaprogramação their third full length release, and first studio album to be released with Neurot Recordings due for release on 15th March. ‘Mente Bicameral’ is the lead track from this release.

According to DEAFKIDS, ‘Deceived by perceiving our so-called individuality as a form of freedom, we are programmed to live and continue living as a fragmented and binary model of nature. Experimental numbers in a worldwide political power-game where human lives and its complexities, connections, necessities and environments are lowered in terms manipulated by algorithms, mind control and brutal force upon our conditions, our rights and our true will. Shaping, overwhelming and fragmenting our tunnels of perception to the point where the excess of information becomes diffused and the whole contained within each being is more and more dispersed, confused and disconnected. Reflecting an insane image of ones identification with an artificial reality – where in some bizarre way, all these schizophrenic, corrupted and truculent theatres of domination and submission that appears all over human relations seems to make some sense – and of non-identification with what would be our inner reality. The telepathic level behind the veils where boundaries and divisions between us and the plane of consciousness, between you and the other don’t really exist. A level of reality where we might have the power to start learning how to reprogram ourselves by our own tools, being able to visit our internal hall of mirrors beyond space and time and deal with the negative roots of our condensed emotions and traumas through a new perspective of relation and control with our thoughts, paths and everything we’re connected with. We must unite as one and resist against the violent symbols of oppression, including what’s imprinted on our own self, that which must be sacrificed daily.

Lead track of the album ‘Mente Bicameral’ starts off as a gentle, yet menacing atmospheric noise avalanche that slowly, but surely morphs into an all encompassing drum and noise cacophony with guitar stabs and pained echoey vocals.

This is not for the faint hearted, and is by no means an easy listen. However, what DEAFKIDS do so well, compared to other bands in the noise genre, is combine the bombastic instrumental aspects of their music, with the vocal delivery and electronica features to produce an unwielding barrage of controlled chaos. And this chaos is unrelenting in its ferocity and power across the 4.20. It is obvious that DEAFKIDS revel in this discordance and dissonance and this is absolutely what engendered my love and appreciation for this band.

They are a force to be reckoned with and not to be taken lightly.

…and more dates to be announced