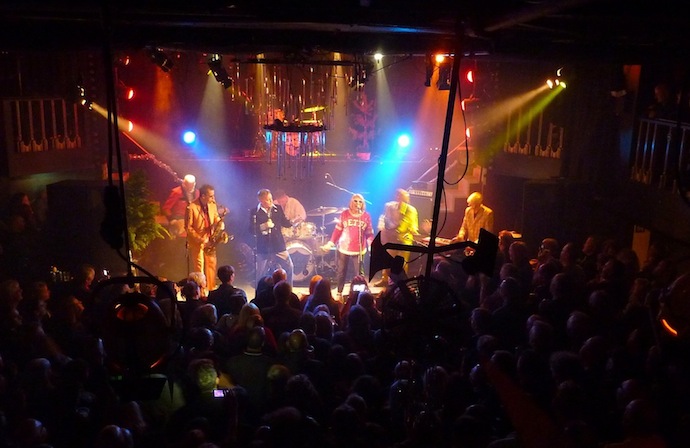 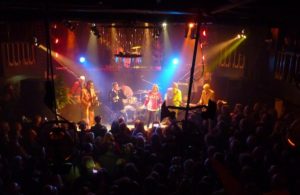 Ah, the Kazimier …… how much will I miss you when you’re gone? Well, of course, that question doesn’t really need answering. Quite possibly the single most unique and undersold venue that Liverpool has been blessed with in recent years, playing host in the seven-odd years of its truly maverick existence to a never-ending roll-call of the most eclectic, original, inventive, and downright strange and oddball acts you will ever – or never, as the case may be – behold within its humble walls…. presenting an otherwise nondescript and deceptively plain facade to its Wolstenholme Square setting – with its more illustrious neighbour Nation club (home of Cream) situated within tripping distance right next door….

Sadly, the end looms for both venues as they currently stand, however, with only Nation being promised an alternative [re]location. It would appear that its little neighbour and relative new kid on the block, our beloved ‘Kaz’, will soon be consigned to the annals of history once the usual unscrupulous City Council-appointed and endorsed developers move in and raze the site to the ground only to erect yet more identikit, soulless, pointless apartment blocks (in this case a twelve-storey monstrosity that will be completely at odds with – and totally destroy – the character and scale of this tumbledown little oasis in the heart of the city). Such is the way things always turn out in the dubious name of ‘progress’.

So it comes as no surprise that for the last gig proper to be hosted here, we are granted another evening – no, make that TWO evenings – with a collective whom are arguably without question the grand-daddies (and grand-ma) of all the wildly eclectic, arty and uncategorisable bands we have seen pass through the doors at this hallowed space since 2008….and there have been more of these than you can shake several bundles of sticks at, such is the sheer diversity and richness of the city’s creative/bohemian scene over the last decade or so. Welcome to the world of DEAF SCHOOL.

The much-loved art rock/new wave/cabaret/vaudeville stalwarts now appear to have an almost tragi-comic reputation of being the ‘grim reaper’ of all Liverpool bands. This has nothing to do with their seniority of course, more to do with the fact that, on no less than three occasions now, they have played incredible shows at venues that have faced closure almost straight afterwards. In 2011, it was Liverpool’s original Everyman Theatre (which has since re-opened after a multi-million refurbishment and rebuild), followed shortly by Birkenhead’s Pacific Road Arts Centre (sadly now no more). They were the last band to play at both. Likewise, their two sold-out shows here at the Kazimier will bring the curtain down on this wondrously esoteric little venue for the last time (save for two further showcase/club night events with which to give the place the ultimate send-off later in the month).

It’s with a huge and barely-suppressed sense of anticipation that the venue is packed to the rafters even before the opening act comes on – the ever-reliable troubadour Henry Priestman (Yachts, It’s Immaterial, The Christians) and sparring partner for the evening ‘Loved Up’ Les Glover, performing an intimate but surprisingly short set, showcasing songs from his last album Chronicles of Modern Life interjected with some homely and humorous anecdotes in between. Perfect for getting the gathered masses all nicely warmed up for the main attraction – which even Henry seemed in a hurry to bring on: “We’re gonna do a few songs for you… then we’ll get Deaf School on right after cos I know you’ve all come to see them!!….” or words to that effect! From where I was stood at the highest – and hottest – point in the venue, on the narrow lookout directly facing down towards the stage, balconies all around were groaning with people trying to get the best view, the cheerful merchandise folks doing more than brisk trade throughout.

When Deaf School do arrive, it’s, as expected, pandemonium …. welcomed home like returning heroes of course…..the irrepressible double-act of Enrico Cadillac Jr. and Bette Bright making their teasing entrance after the rest of the band take up positions…. and launch into an incendiary 90 minute set which mixes up all the magical elements of what make this band so goddamned unique and….well, legendary! Glam rock, cabaret, theatre, vaudeville/music hall show tunes, torch ballads, furious punk riffage, kooky pop, you name it…. they pull it off ….…. always beyond simple pigeonholing, and always supremely entertaining. Ian Ritchie’s Roxy Music-esque sax outbursts and the Rev Max Ripple’s wicked keyboard / accordion virtuosity were the glue that bound together much of the set … not to mention guitarist Clive Langer’s amazing hyperactive fretwork, Steve “Mr Average” Lindsey’s anchoring bass and Greg Braden’s formidable drum heroics….. it really was a joy to behold. 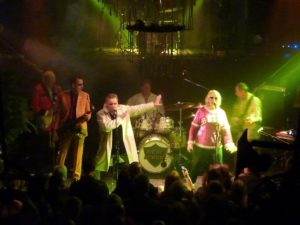 Never once did this thrilling roller-coaster ride flag or let up – tempos would rise and fall, songs would ebb away to near silence and them come surging back. Make no mistake, this was an exhaustive and celebratory [some would say valedictory for the venue] trawl through the finest recesses of their back catalogue, interspersed with some of their greatest sing-along/ shout-along numbers such as the immense adrenalised Capaldi’s Cafe, the melodramatic and stunning Taxi, the explosive Thunder and Lightning, the towering Second Honeymoon, the stately showstopper Final Act, and, inevitably, the one song which would go on to sum up the entire evening: What A Way To End It All, performed not once, but twice – the second time as their THIRD encore…. just when we thought they’d retreated to their dressing room to finally catch their collective breaths!

As if that wasn’t enough, they also had the luxury of the Kazimier’s two stage levels to gallivant about on – notably Bette, Enrico and drummer Greg (introduced as Dick Whittington by Enrico and playing a second kit on the upper level on some numbers!)….and then “Mr Average” was given his own star vocal turn too. Pure spectacular decadence in excelsis. And when we’re talking about Deaf School, we wouldn’t have it any other way!

There is very little to fault with their extravagant performance tonight, even though I am a relative newcomer to their live shows, having only caught them the first time during 2009’s (then annual) Hope Street Feast food/music festival, despite always being aware of their hugely influential status over the decades….but tonight’s show whipped everybody into a frenzy … of massed sing-alongs, cheering, and even hanky-waving compliance from the crowds during the aforementioned Thunder and Lightning.

Of the various wildly differing gigs I have caught at this amazing venue, few have moved me quite as much as witnessing this incredible homecoming of sorts. From the way every single note was rapturously received by the [predominantly] middle-aged crowd present here tonight, it would appear that The Kazimier was simply destined to host a show by the greatest vaudevillian art rockers of them all as a last hurrah. And to do it in such style and with such panache simply puts a lot of the other young pretenders to the art-rock throne into their place.

And yes…..I have to admit I was overcome with emotion when THAT song came on, and no doubt many others were too: massed ‘lumps in throats time’ for sure.

I will no doubt see Deaf School in action again at some point, but I will miss the Kazimier like crazy when it’s gone. What A Way To End It All indeed!

The band can be found online here: deafschoolmusic.com.

All words and photo images by Martin Gray.