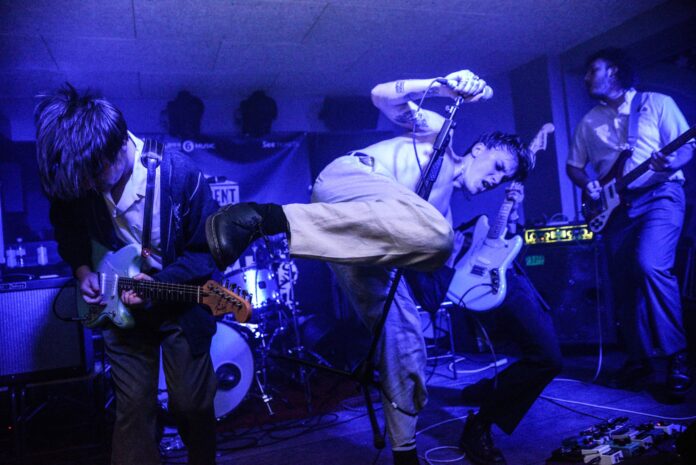 New bands playing small venues as part of Independent venue week are always going to be visited by those in search of great new music. Keith Goldhanger ventures into town to see Deadletter who he has high expectations of and gets even more entertainment than he bargained for.

It’s Independent Venue week and what else could be better than a visit to one of the smallest venues in town to see the band responsible for one man’s favourite show of the previous year (Deadletter) and maybe hang around to see what else is on offer during the evening.

We’d seen Deep Tan a couple of times already and it’s always great to witness this trio provide us with a set of songs that no other band around the gig circuit can currently match. Each song built around a throbbing (PIL- like) bass line, intimidating vocals with a minimalist guitar that goes back further than the 80’s influenced music we’re reminded of a lot nowadays. Deep Tan are a welcome distraction from a lot of the rowdy shouty stuff we get to witness each time we enter these small venues in 2022.

There’s nothing wrong with being rowdy of course. Priestgate, a band we know little about at the moment are given the task of ending the evenings entertainment and were a fabulous reward for those of us hungry for more new great bands that will no doubt turn up a few more times before the year is out. This lot are from a few miles north of Hull and sound like more aggressive versions of The Cure or Echo and the Bunnymen when they first turned up in equally small rooms to entertain those cool enough back then to know the right places to hang out. A white vest gets shredded by the front man after two songs and from this moment on its brutal catchy sweaty topless 1980’s Pop, Goth (before it was labelled ‘Goth’) recognisable music and as compelling as anything we’ve seen recently. Priestgate are a bit like HTML without make up or daft clothes it could be said. There’s room for both. We’ll be back for more of this for sure we say as we climb back up onto the street above where our new favourite band are still hanging around at the end of the evening.

This trio of bands are taking turns in headlining during the short six-date tour around the country. Deadletter open up the proceedings tonight at the early hour of Eight O’clock and explode into life the moment they arrive. It’s this six-piece we’ve predominantly come to see and we wanted to make sure the first visit wasn’t a fluke.
It wasn’t.

Last years appearance inside Cardiff’s (even smaller but equally important) Fuel venue during the cities Sŵn Festival had some of us shaking with delight for hours after seeing them despite the show being sandwiched between bands that were already favourable in our ears Enola Gay, Lice, Ladybird and Cheap Teeth. Deadletter’s tunes that are already available (see below) are going to be many peoples favourites as this year crawls on and we imagine more than one of us will be mentioning tonight’s show again in the company of others when there’s a scramble for tickets in some of the larger venues around the country for the same set of songs from the same set of people that are to provide the entertainment. It doesn’t feel as though we’re sticking our necks out too much here when we start predicting that a lot of people will utterly love this.

Try to see them now and witness another great front man for the collection, a bass player who doubles up on the vocals, a drummer that adds even more layers of vocals when needed and hits the odd cowbell. A Saxophone player adding more vocals and at times more percussion (nothing overplayed) keeps the momentum going. Twin guitars chop and change in the same way that the ones belonging to The Gang of Four provided us with back when we were young. The sarky aggression is there just as we remember New Model Army having before they started releasing records. Then, if you’re still taking notes you could add a musical backing track similar to The first Adam & the Ants album with the dance beats of The Rapture or LCD Soundsystem. Basically, this all results in the soundtrack to a fist fight between Shame and Franz Ferdinand in today’s money. It’s a glorious racket to witness and if you feel one of us may be trying too hard to convince you then at least have a look at these yourselves before getting that stick out.

Its night’s like this that make the crawl towards the weekend much less of a struggle. The Social is only one of two (the other being the 100 Club) reasons some of us ever bother to visit the west end in London nowadays but this is an important space that gig goers should take note of and visit once in a while. Without these small venues, the big ones could not exist. This was the room where Adele turned up one Saturday afternoon to support Dan Le Sac Vs Scroobius Pip. Every small venue will have stories like this. If you want to witness mind blowing stuff when you least expect it you have to take chances. These three bands and many many others will be appearing a few more times in your local venues throughout the year if you keep paying attention and will provide as many memories, if not more than the ones that take place in venues four deep at the bar and big enough to lose your friends and mobile phones in.

Make it a new years resolution to visit these places more often. We missed them loads when they were lying empty for more than a year. These venues are important to everyone involved in music whether playing, watching or anything in between.

Don’t just meet your mates down the pub. Meet them down the one with the bands playing in the backroom, basement or upstairs space and don’t feel it’s important to know anything about who’s playing either. When you get the thrill of a great catch you’ll never forget it.

Tonight was a winner for the few dozen inside the tiny room tonight. This is why some of us venture out on cold Tuesday evenings in the middle winter and this is why the habit will continue but it needs the support of everyone who involves themselves in music. Whether listening, performing or somewhere in between as someone once said about thirty seconds ago.

Words by Keith Goldhanger. Photos by Keira Anee. More writing by Keith on Louder Than War can be found at his author’s archive. You can also find Keith on Facebook and Twitter (@HIDEOUSWHEELINV).