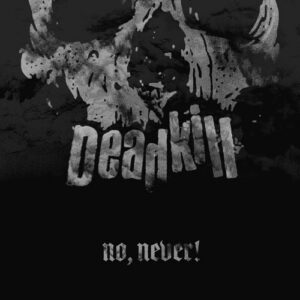 Seattle punks DEADKILL release their debut album – one that deserves to keep company with some old classics in your record collection. Louder Than War’s Anne Johanna gives it a listen.

Ever since the world heard the death rattle of grunge, many dismissed bands emerging from Seattle with indifference. More fool them, as there is a thriving underground scene bubbling away in the shadow of the Space Needle and one of these bands making an almighty racket is Deadkill. Now armed with their full-length debut following the release of a self-titled, four-track 7 inch in 2012, these Pacific Northwesterners punch you right in the face with their catchy hard core tinged punk rock.

Starting off with the slightly middle of the road but still singalong-worthy Orpheus, No, Never! hits its stride with Hoof Polish. The album dips its toes into a slightly more commercial sound in Ghost Out with its whooawhooa chorus but is still pure adrenaline driven punk. The album moves along like a rockier Circle Jerks, and there’s also similarities to Adolescents, Black Flag and other 70s and 80s punk bands throughout. Most of the tracks clocking in at just over one or two minutes, Deadkill squeeze the best juice out of each song. Vocalist Bryan Krieger has exactly the right kind of voice for this rocking punk record, and in all honesty I’ll be surprised if this band don’t get known a lot better. The band managed to bag Matt Bayles (Mastodon, Isis) to record the album and the end result is polished, but because of the band’s delivery manages to hold on to a gritty, trashy edge at the same time. Guns is one of those tracks that get you nodding along in preparation for the full throttle hard core of Kill It Dead and Borderline, sure to drive the crowd mental at the band’s gigs. The first song that guitarist Michael Stubz ever wrote, Oh God Help You, was already released on the afore mentioned EP and is given another airing here. The Desert is one of the best tracks on the album, slower and more dynamic, driven by Michael Loftus’s bass lines and the relentless, almost drony guitar riff with Krieger layering on the angry vocals.

These 14 tracks make an impressive, contemporary punk record which could and should sit proudly next to your classic American punk albums. Deadkill are not reinventing the wheel by any means but hey, if punk is about the energy and the tunes which Deadkill seem to have by the truckload, this is the album to get.

All words by Anne Johanna. More writing by Anne on Louder Than War can be found in her author’s archive.