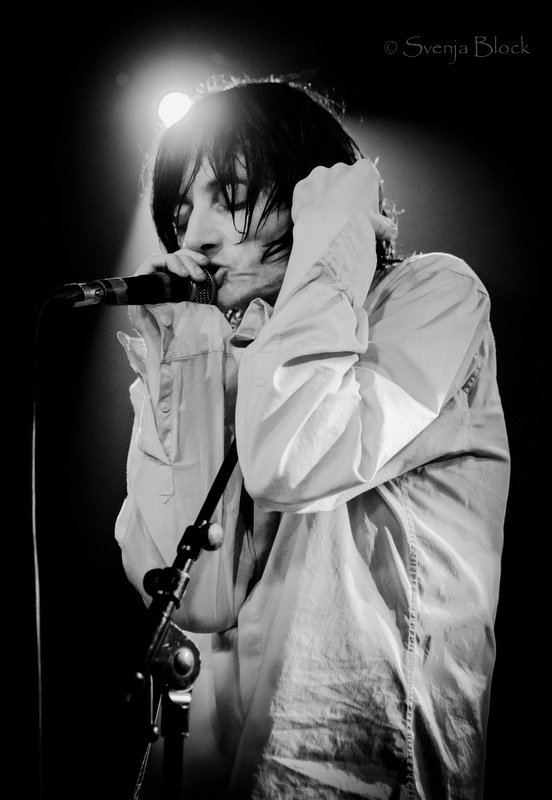 The dark, emotional intensity of Deadcuts and the harsh, twisted nihilism of Starsha Lee take over a Camden Rocks night at the Barfly in Camden. Words by Anne Johanna. Photos by Svenja Block.

“It’s art.” “Pretentious.” “It’s cool.” “Nudity for the sake of getting a reaction.” “A star.” “A copy cat.” “A performer extraordinaire.” “Unoriginal.” “Ravishing.” Starsha Lee may not have been around for much longer than six months but the band certainly have managed to do what a lot of new bands don’t – provoked opinion, and a divided one at that. Guitarist Crispin Gray (Daisy Chainsaw, Queen Adreena, The Dogbones) clearly has a penchant for a certain type of female performer for his bands, hence the inevitable comparisons of Starsha Lee to his previous output. As the fiercesome foursome get onstage to support Deadcuts, there’s a steady trickle of punters into the room which suggests that the word of mouth has done the talking.

Starsha Lee kick off with Uncle Nietzsche, with the leading lady wearing a sparkly white corset, sunglasses hiding her eyes and a drink briefly in hand, she screeches and sings her way through the catchy chorus and then the shoes come off. Crispin Gray’s cold as steel, fingernails on chalkboard guitar twists and turns and spirals around the singer’s passionate, rabid cat on heat delivery. Holy Hatred is jagged, nihilistic and Lee’s vocals with the guitarist sound good. Gray looks like a man who goes to bed at night in stained silver lamé pyjamas – the man exudes natural dirty glam-ness and otherworldliness. Michael Vakalis on bass seems a little worse for wear and at one point seems to genuinely think that his shoes are talking to him, however doesn’t appear to miss a note and manages to provide a solid backing along with Steve Nightmare on drums. (For any music trivia fans out there, Nightmare was in the industrial band Automata with Jerome Alexandre of Deadcuts some 15 years ago.) The corseted, long-legged Miss Lee herself is a ball of fire, all flailing limbs and expressing herself with a frenzy, demanding attention. By this time the corset is coming off, half-exposing her chest. She grabs her ass and her crotch. The sexy, swampy groove of Glass Diamonds shows the band is comfortable experimenting with different styles and in fact, the mish-mash of influences and the willingness to experiment is the blessing of this band as predictability is what oft kills things. By the time Post Modern kicks off the raven-haired singer looks epileptic. She is both trashy and classy at the same time – how is that even possible? She plays up to the cameras in front of her and sneers out her vocals. Ain’t We All Excuses of God is a relentless, primal punk song down to the last squeal. She is captivating, and the expressions on people’s faces vary from totally bewildered to wide excited smiles. Love Is Superficial and its grinding, filthy riff ends the riveting set and the sweat-soaked, half-naked ragdoll of a performer walks off stage. 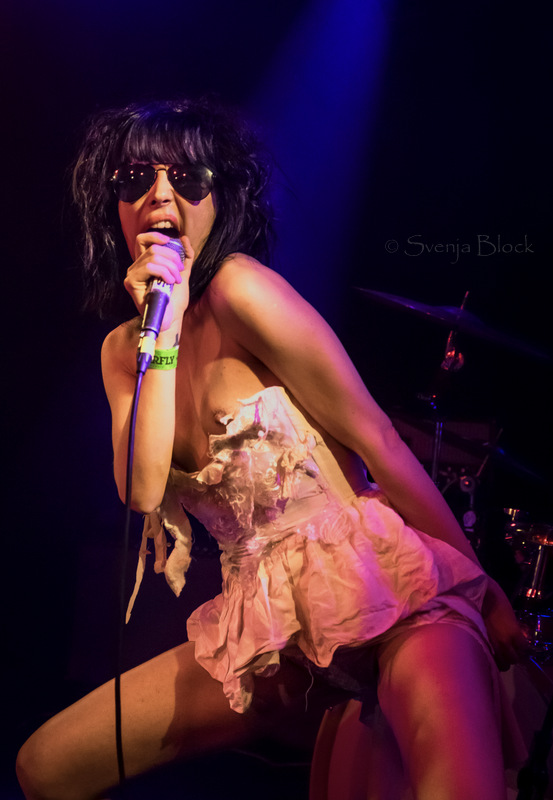 In all fairness Starsha Lee does continue in the spirit of Gray’s previous co-inspirators. However in this frontwoman we have an intriguing artist of her own right with her own vision, voice and style. As for the divided opinion on Starsha Lee out there, the Mexican poet Cesar A. Cruz said it best with the following: “Art should comfort the disturbed and disturb the comfortable”. Take of that what you will, motherfuckers. The new rock’n’roll queen is in town.

On to the headliners, Deadcuts have come a long way since I first witnessed them live in the long-gone Rattlesnake bar in Islington some four years ago. The band played the biggest show of their existence back in January supporting The Libertines at the O2 Arena in Greenwich and are now on a roll to start promoting the new material from their second album due out on Halloween. The album is still a work in progress and many a sleepless night has been spent on perfecting the songs, of which many are being performed tonight in the hot upstairs room of the Barfly.

After opening with the catchy Pray For Jail familiar from the debut album Dark Is the Night, Mark Keds puts down his guitar and wraps himself around the mic stand to follow with Keep It Dark. It’s odd to see Keds without his trusty Gibson but he looks comfortable performing without it throughout the night and shows that he’s not just a guy behind a guitar. It’s a beautiful song but feels like more could be drawn out from it – as with many Deadcuts tracks it feels cut short. The Purge proves that Deadcuts are not scared to strip down to simplicity, and who would be when the melodies are so strong. Despite looking terribly gaunt, which the baggy clothing fails to disguise, Keds still looks like a man on a mission with the fire within to do what he’s here to do. One cannot help but wonder if it’s just the sheer passion for his art that keeps him alive.

Craving, Unfaithful and Vains give promise to a more varied and mature second album. Cass Browne is steady on drums, as can be expected from Keds’ ex-band mate from Senseless Things and live drummer from Gorillaz. With the man in the hat, Joseph Johns, on bass completing the reconfigured line-up after Mark McCarthy and Trevor Sharpe’s departures, Deadcuts seem more like a unit now and the vibe on stage seems, dare I say, happier. Summon the Witches, for which the band released a video last year, is clearly known to the crowd and is followed by the dark, slow, suspenseful feel of the upcoming EP and video Dope Girls. Its melancholic post-punk vibe with Keds and Jerome Alexandre’s vocals is, quite simply, glorious, and is the highlight of the evening both musically and performance-wise. Had things gone the other way, which luckily they didn’t, the world would have missed out on the second coming of Mark Keds who has proved he and Jerome Alexandre on guitar make a fine songwriting team. One of Deadcuts’ earliest songs, Kill Desire, closes the set with a gorgeous crescendo that Deadcuts do so well.

The variety in the mood of the songs makes for a gripping setlist and despite the short half-hour slot tonight due to the early curfew and the organisers trying to cram in too many bands, it was a well-rounded, complete sounding set of songs with the emotional intensity that one has come to expect from this band. And it’s this that has gained Deadcuts an already loyal, well-deserved following. One hopes that the upcoming second album will finally give them the wider recognition they deserve.

As both Deadcuts and Starsha Lee are uncompromising to the hilt and totally dedicated to their respective visions, it feels appropriate to borrow the words of the late John Keats: “Poetry should be great and unobtrusive a thing which enters into one’s soul”. Unobtrusive tonight was not, however I doubt anyone’s soul was left untouched.

STARSHA LEE are currently recording an album for release as a digital download by the end of May. They are appearing at the Alice’s Wicked Tea Party festival, Dorset on 3 June and at the Dublin Castle, London on 25 June.

DEADCUTS will release the Dope Girls EP on 6 June with a video directed by Natanya Louise Waybourne. The as yet untitled second album is set for release on Halloween. Next live shows supporting Peter Doherty’s Eudaimonia Tour O2 Academy, Bristol on 11 May and Riverside, Newcastle on 16 May. Next headlining show at The Lexington, London on 30 June. Deadcuts are also appearing at the Alice’s Wicked Tea Party festival, Dorset on 3 June.