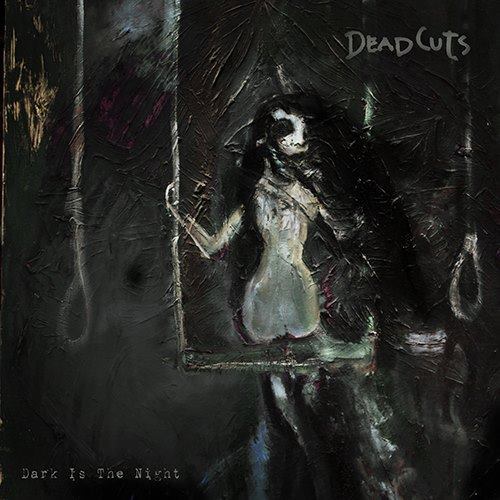 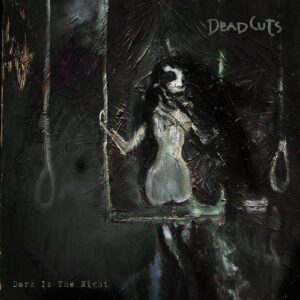 Deadcuts – Dark Is The Night (Speedowax)
LP / CD
Out now

Born in the dark alleys of East London some two years ago, Deadcuts have released their moody, yet triumphant sounding debut album. Louder Than War’s Anne Johanna reviews.

Following the demise of the indie punk band Senseless Things in the mid-nineties, frontman Mark Keds continued his musical career with a few other bands but none of them felt quite right. After a chance encounter with Jerome Alexandre in 2011, the pair hit it off and begun writing songs together. Keds and Alexandre were joined by Mark McCarthy on bass, still also playing with The Wonder Stuff, and Trevor Sharpe, who was a member of Miranda Sex Garden amongst others, on drums.  Several intense shows followed including support slots for The Libertines in July of this year and Babyshambles last year. All of this raised the hopes high indeed for this long player and now Dark Is The Night is finally here, produced by Harvey Birrell (Therapy?, Buzzcocks, Chelsea Wolfe, Alien Sex Fiend). The prevailing question is whether Keds can still cut it, after the short and unsatisfying lifespan of his post Senseless Things groups such as Jolt and The Lams, notwithstanding his now overcome addictions which the man himself has been open about.

Tail Of Voodoo gets things going, and whilst not a masterpiece to save the world of music from an apocalypse, it is a catchy and quirky track that paves the way for Kill Desire, which was released as a split single with the Hip Priests in March last year. The song has maybe lost some of its tenderness since the earlier versions, however the beauty of the song is still there, and Keds’ raspy voice has the tone of a man who has lived more than just a few lifetimes.

There are echoes of retro indie on the album, particularly on DK, Blind Sexx and Mary Disorder, but it is always interwoven cleverly with a dusting of a harsher post punk sound and a barrage of chimey guitars. Deadcuts really show their diversity and what they are capable of on Floods, where the band recruit the attitude-laden guest vocals of Beatrice Brown. Starting off in a pared down, titillating way with Brown purring out the words in a Lydia Lunch-esque fashion, the track progresses into a stomping, dirty, groove-your-hips kind of a belter with Brown and Keds’ voices duelling and complementing each other perfectly. My only gripe is that the track is short, as they all bar one are on this record, at under three minutes.

Speed Sisters could be a pretty straight forward indie rock track but the twirling and grating guitars throw a curve ball by adding the now familiar post punk vibe. Dusk Chasers is one of the earliest tracks that started to do the rounds when Deadcuts first emerged and, like Kill Desire, has been re-worked for Dark Is The Night. The shoegazey, dreamy and epic soundscape of the song has morphed into a punchier and more stripped down version which perhaps fits the overall sound of the album slightly better. Nevertheless, it is a truly stunning melody and Dusk Chasers remains one of the true gems in the Deadcuts discography. Bittersweet melancholy is what Deadcuts do very well indeed.

It was exciting to learn that a song I first heard at the Lock Tavern in London when Keds and Alexandre performed acoustically and the name of which at the time was Isolation, makes an appearance on the album under the title Keep It Dark. The galloping verse progresses to a beautiful and melancholic chorus and it is a sublime merger of beauty and the beast. Sweet guitar pop is the order of the day on Perfect Made Practice and yes, Deadcuts can do sweet guitar pop, too. In less experienced hands the end result of this album could have been messy and trying to be too many things at once, but with Deadcuts’ unique style firmly stamped on each and every track, there is no danger of this happening. Birrell’s production lets each instrument breathe and makes the actual songs shine through.

Pray For Jail is a joyous, straight forward two minuter and gives another good glimpse of the band’s diversity when it is followed by another Beatrice Brown led number called Ragged Star. Mostly acoustic with no percussion throughout, and this time with only Brown’s vocals providing the dynamics and bringing the track to a climax. It is sultry and sexy, never sleazy, much like the whole of the record. Without Love We Perish closes the album, perhaps a useful reminder of what is most important amidst the hedonism and temptation lurking around each and every dark corner.

The album cover art by Sophie Macdonald gives a good idea of what is inside. Dark, slightly unsettling, yet sprinkled with the joy (and perhaps surprise) of still being alive. There are enough hooks on the record to reel you in, yet enough surprises to keep you on your toes, hence making this album one of those special ones that you will come back to time and time again. That said, some tracks leave the feeling that they would have deserved to allow to grow some more, but perhaps the intention was to ‘be a bit punk and leave them short’. Mark Keds’ lyrics should not go unmentioned either. Keds draws from his keen interest in art and literature and with spoken word performances under his belt also, it is no wonder that the lyrics on this record are pure poetry.

Despite having supported bands loved by the NME and suchlike, do not make the mistake of placing Deadcuts in the standard indie pile. This band are not afraid to challenge the listener and neither are they willing to conform or be categorised. Instead, they choose to write their own story on their own terms, and this is one devilishly addictive album. As for the question if Mark Keds can still cut it? Oh yes, he can.

Catch Deadcuts live at the Hoxton Square Bar & Kitchen in London on 11 September, and The Firefly in Worcester on 12 September.