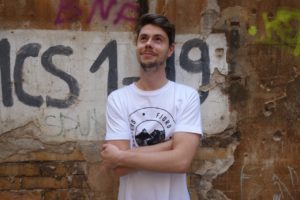 DEADBEAR – The Trees are Dancing (self released)
CASS / DL
Out now

DEADBEAR is the alter ego of Berlin-based producer and electronica musician Nick Donovan. Donovan began experimenting with electronic music as part of a university ‘laptop orchestra’ and later making interactive software including being commissioned to build an app for CERN’s Large Hadron Collider.

The Trees are Dancing is DEADBEAR’s latest work and is very much a work of two halves. Three songs were recorded in Manchester and three in DEADBEAR’s adopted home of Berlin. Both cities are arguably dripping in electronica history, so he could not have chosen two more influential places within which to immerse himself and create a piece of work.

This six track album starts off with Holding Hearts Aces and it has a luscious crackly intro that leads into blessed out electronica mixed with field recordings of children playing. The tribal beats and rhythms come in and the hypnotic (found?) vocals create sumptuous layers upon layers of sounds that build up to a satisfying end.

The albums’ second single Modersohnbrücke is a another gorgeous track that builds on it’s layers of field recordings, simple, repetitive beats and samples that, combined with the gentle electronica end up creeping under the skin and moving the feet. The sounds and beats increase to quite a beautiful cacophony that would give Fuck Buttons a run for their money.

The title track has a nice keyboard throb running throughout with spoken word introduced. It’s the most chilled out track so far with gentle percussion introduced and a euphoric last quarter that ends with a recording of heavy rain. Really clever track.

The Vault again layers found sounds, singing and samples on simple yet infectious beat. On paper it should be a mess, but it ends up being beautifully put together and just works! The layers border on noise towards the end (not that I’m complaining) and what is basically controlled chaos, becomes a thing of absolute joy.

The final two tracks are the most chilled ones that delve into ambience and feel almost 808 State-esque in their execution. Again, layers are expertly put together to create evocative and sensory experiences that please and would translate to the live stage brilliantly. DEADBEAR can easily be mentioned in the same breath as Burial, Mount Kimbie, Blanck Mass and Fuck Buttons for his ability to create musical works that bend and defy genres and yet create beauty out of chaos.

DEADBEAR’s aforementioned self released album The Trees are Dancing is available as a VERY limited gold cassette and via bandcamp with a instant digital download. New single Modersohnbrücke is out now and is the second release from the album.