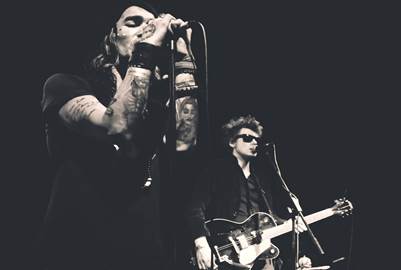 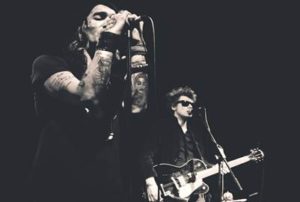 Independent record label Fuzz Club have announced the release of Dead Skeletons Live in Berlin, which will be released February 26th. Their first release in two years, the album captures a performance at Berlin’s iconic SO36 Club in 2013.

This unique show, full of celebratory energy, marked the release of their double A side for “Om Varja Sattva Hung/Dead Comet” in the birth place of their own label, Dead Monk Records. It also saw the club revived especially for this performance.

To their fans, Dead Skeletons are more than a band, they are rock n roll spirit guides, exploring the depths of light and dark, life and death, and all the spaces in-between. Powered by their ‘Dead Mantra’ – “He who fears death cannot enjoy life” – Dead Skeletons are a celebration of the self, on the same enlightening spiritual path first trod by free jazz experimentalists Albert Ayler and John Coltrane.

The Berlin show captured on this record begins with calm, floating drones that could have been forged in the tranquillity of Iceland’s glaciers. Then the skeletal guitar line of “Om Varja Sattva Hung” slices in propelled by a relentless motoric rhythm. The driving, precise beats throb like German Krautrockers Neu! or La Dusseldorf.

Although Dead Skeletons are in search of spiritual answers, they also rock. Like Buddhist Stooges, theirs is a raw and propulsive psych. They get down and dirty on “Psycho Dead” with a sleazy bass line reminiscent of New York duo Suicide’s classic “Johnny”, seeping with edge, danger and attitude.

The birth of Dead Skeletons came in 2008 when Nonni was seeking collaborators to work with him on a piece of music for an installation for the Reykavic Art Museum. He enlisted friends from Iceland’s art set – Henrik Björnsson of Sinagpore Sling and Ryan Van Kriedt of Asteriod #4.

The track was released on Anton Newcombe’s A Records in 2010. This was followed by their debut album, ‘Dead Magick’, in 2011, and three single releases in 2012 including ‘Buddha-Christ’ on Fuzz Club. Their most recent release, ‘Dead Comet’, was in 2013 on Nonni’s own Dead Monk Records.

Visual art has remained implicit to Dead Skeletons, with many album covers originating as paintings, and Nonni painting on canvas as part of the group’s live show. Nonni also maintains his own art practice alongside a clothing line under the label, DEAD.

Live in Berlin is to be released in two double 12” gatefold editions, one standard and one as a Fuzz Club Exclusive. Both editions feature cover art taken from paintings by Nonni Dead, printed inner sleeves featuring photography from the show, a silk screened D side and embossed Fuzz Club logo. The standard vinyl is 180g heavy white vinyl with red and black splatter. There are 1200 copies.

The Fuzz Club Exclusive cover is also hand numbered, embossed, and vinyl is 180g black with yellow splatter and limited to 300 copies.

Also available on CD, cassette and with a new range of limited edition merchandise including tees and tote bags featuring the Dead Mantra logo, and 40cm x 40cm screen prints of the cover art on heavy card.

Based in East London, Fuzz Club has gained a reputation for surfacing the best emerging talent from Europe and beyond, and releasing them on high quality, limited edition vinyl pressings, alongside a roster of the best known names in the underground scene including The Black Angels, Alan Vega, Dead Skeletons, A Place to Bury Strangers, The Telescopes, Singapore Sling, The Underground Youth and Sonic Jesus. Today Fuzz Club has around 20 artists and over 40 releases.