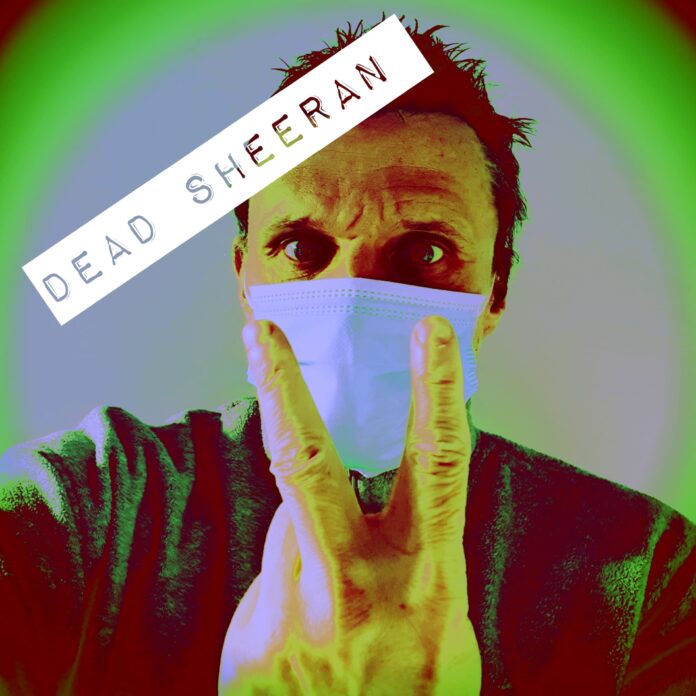 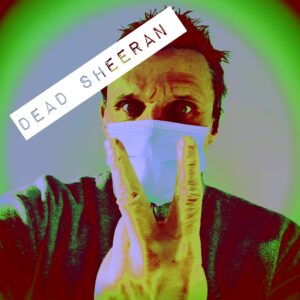 Louder Than War was the first outlet to report on Dead Sheeran when he released debut track ‘The Fonz’.  Was it just a ‘one-off. a fluke?’ asked Ged Babey.  No way! Five more savage, funny, socio-political tunes are ‘dropped’ – like a fuckin’ bomb!

Yeah, really looking forward to your podcast later mate / like I’ve got nothing better to do than listen to you talk about yourself for 20 minutes you cunt. / See that’s the problem with this lock-down business / every-one’s a  fuckin’ media staaar!

This is probably the best piece of minimalist, gut-level ‘protest music’ which has appeared as a direct result of lockdown. It’s punk-rock with no guitars, undeniably Sleaford Mods influenced, laugh out loud funny but deathly serious at-the-same-time.

Six savagely funny, brutal’n’ironic songs which you can’t tell initially whether they are mocking or rocking, for-real or unreal.

They are as sweary-as-fuck, full of clever dumbness, sledgehammer irony, vicious sarcasm and nostalgic cliche -used as a weapon.

Self-deprecatingly self described as ‘Bit like the Sleaford Mods, just not as clever’, Dead Sheeran is an idea which probably would’ve come to nothing had we not all been locked-down, quarantined and self-isolated.

The Fonz track, released a few weeks back as a teaser, was slated by many on the Sleaford Mods Fan page on Facebook for being ‘carbon copy’, ‘cookie cutter’ and a ‘shite’ parody of their (anti-)heroes. It got three times as many shares as any other new act on Louder Than War though, which meant a lot of people, who can presumably take-or-leave Sleaford Mods, liked it a lot. It was funny. Direct. Ironic. But he still meant it (maan).

To me, it’s like when Rotten/Lydon said he hated how ‘second generation’ punk bands all sounded the same, and ripped him off.  But take say, the Cockney Rejects – compared to the Pistols.  Same basic ingredients, same formula, but completely fuckin’ different bands and equally as ‘good’ looking at them objectively.

Things Were Better in the Eighties is the only track which could get on the radio – with a tweak of the sh@t and p@ss – and is either a critique of nostalgia as valium for the masses in disguise or a novelty-rap about childhood memories of the 80’s. Yep, Dead rips-off the Streets as well as the Mods. I’m still astounded that the final ‘I want to help you Ro-land’ is somehow so full of pathos.

Mentality Street seems to date from pre-Covid and is on a par with the Sleaford Mods in terms of grim accuracy in the picture it paints.

Welcome to Mentality Street / small-town mentality street. / ‘stop free movement’ says the woman who has never left her street / breakfast on the t-shirt / still wearing her slippers / kids dropping the f-bomb before they’re three years old / well down sweetheart, we’re proud of ya.

Bled By Science is the song specifically targeted at the government and their crisis management of the pandemic.  It lives up to the claim that Dead is as influenced by anarcho punk and Oi as by Williamson and Fearn.

It’s Mental These Days and Wanking With Tears In My Eyes (will win awards for song-titles of the year and) are prime examples of songs which have never been so perfectly self-descriptive in their title alone.

Is calling the band Dead Sheeran a stroke of punk rock genius -or a tacky, sick, means of grabbing-attention?  It’s outrageous in a time when no-one is shocked by anything any more, so therefore impotent in it’s shock value.  But if the millionaire pop-star gets wind of it will he bother to get his lawyers on the case? Fuck off.

It is a great ‘mini album’ and will be treated like marmite by the the listening public who get to hear this kinda stuff.  I think it’s absolutely brilliant.  It hits hard at deserving targets and it’s very clever in its adoption of the Mods modus operandi with a subtle twist.  You can only get so-angry, so to hear rage with a few laughs and a bit of pathos can only be a good thing.